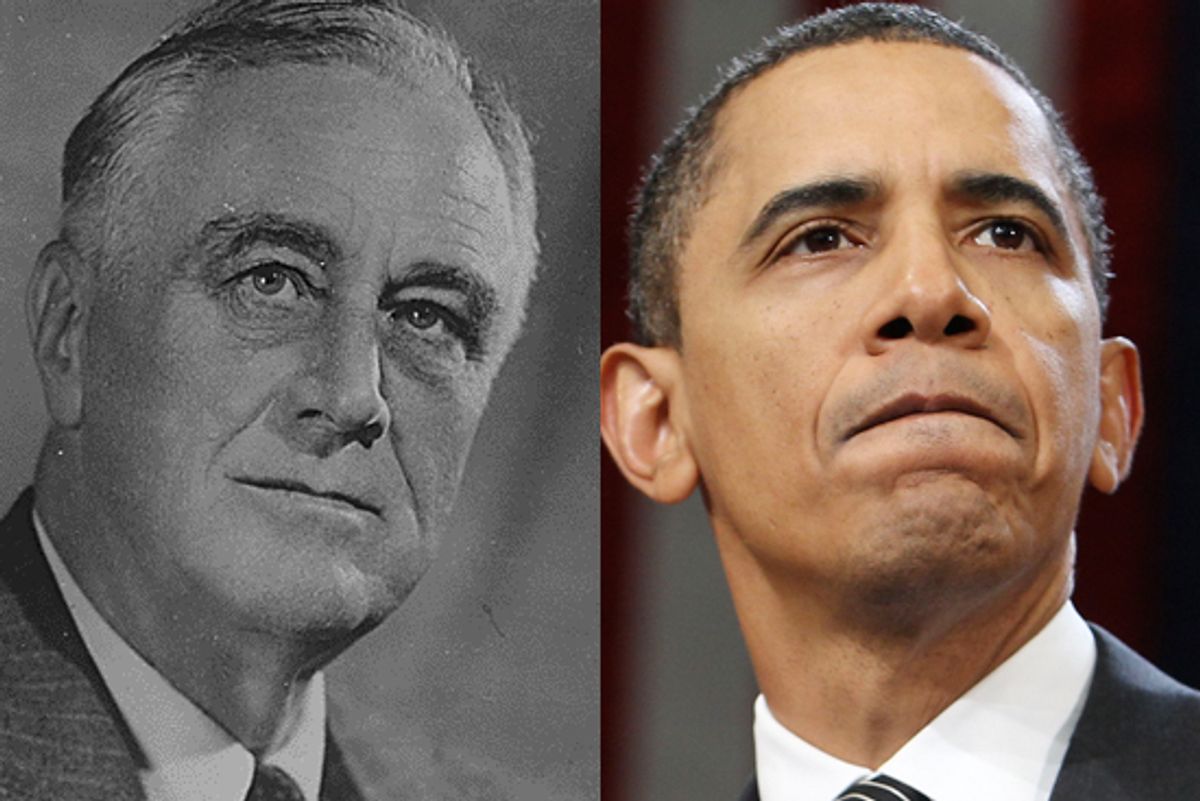 Comparisons between President Obama and Franklin Roosevelt often assume that Obama’s electoral fortunes will rise the closer he hews to FDR. A look at past election results, though, suggests that Obama is indeed heading down a path trod by FDR -- one that bodes ill for Democrats’ hopes this fall.

Obama’s tenure has frequently been likened to the first few years of the FDR administration, but the better comparison is probably to 1937 and 1938. That period, like the current environment, is thick with charges of socialism and communism, as well as more mundane calls for lower taxes and a balanced budget. These are, by now, the most frequently-deployed tools in the conservative arsenal, but they were, if not first forged, then first sharpened in 1937 with the publication of the Conservative Manifesto. (Among the principles espoused in this right-wing Decalogue were revision of the tax code, reduced federal expenditures, a balanced budget, and the "maintenance of state rights.")

As now, the increasingly frantic criticisms of federal action in 1937 and 1938 can be traced to a difficult economic climate. In 1938, the unemployment rate was a catastrophic 19% (nearly double the current rate. And as now, the opponents of the president argued that the economic turbulence was aggravated by his policies, which allegedly created a climate of uncertainty that was hostile to economic growth.

FDR campaigned mightily in 1938, but the electoral cake was all but baked: the Democrats lost 7 Senate seats, more than 70 House seats, and 13 governorships. If history is any guide, then, 2010 will see a sharp curtailment of Democratic gains from 2006 and 2008, just as 1938 saw Democratic majorities recede from their historic highs of 1934 and 1936.

Despite the high-volume right-wing cries that accompanied the losses in 1938, the lesson of that election is emphatically not that Obama should shift ideological course or move to placate his critics. Instead, a look at other FDR-era elections reveals that electoral losses were most likely linked to economic conditions and not the trenchant criticism of his adversaries.

In 1934, the unemployment rate was at 20 percent. Prominent opposition to Roosevelt’s policies emerged, for example, in the form of the American Liberty League, which decried allegedly socialist New Deal policies and the attendant loss of personal liberty. Defying gravity, the Democrats gained seats in both houses of Congress that year, increasing their already sizable majorities. The crucial factor was that the unemployment rate, though admittedly terrible, was marginally better than the rate when Roosevelt was elected in 1932. In the lead up to the 1934 election, Roosevelt asked the country, "Are you better off than you were last year?" Democrats held their ground in Congress because most Americans answered "yes."

1936 told much the same story. In 1935 and 1936, Roosevelt signed into law, among other things, the Emergency Relief Appropriation Act – at the time, the largest peacetime appropriation ever -- the Social Security Act, and a dramatic increase in the tax rate for the wealthiest Americans. These acts were, predictably, accompanied by cries of "socialism" and "communism" (Al Smith compared New Dealers to Marx and Lenin) and complaints that FDR was punishing the successful and shattering the budget. Amidst these cries, the unemployment rate continued to fall, reaching a low of around 17 percent. In November, FDR won a 523-to-8 electoral college victory over Alf Landon. In the next session of Congress, Democrats held a now-unimaginable 331 House seats and 76 Senate seats.

So what changed in 1938? Not the complaints of FDR’s critics, which, though louder and crisper in 1938, had been heard more or less consistently since the New Deal’s inception. Instead, the main difference between the triumphant elections of 1934 and 1936 and the setback of 1938 was the direction of the unemployment rate, which was high in 1934 and 1936 -- but falling -- and high in 1938 -- and rising.

The bad news for Obama is that the unemployment rate is unlikely to get much better by November -- and certain to remain higher than when he took office. Electoral losses this fall are thus all but inevitable.

The good news, though, is that the slings and arrows of the right wing -- e.g., that Obama is a white-hating socialist with secret plans to destroy the United States -- are probably more a handmaiden to current economic woes than fixed beliefs about Obama’s character. An even more important lesson is that ideological opposition to governmental programs gains traction only when those programs don’t seem to be working. The anti-Obama chorus seems uncomfortably loud now, but it is likely to lose many listeners when the inevitable economic recovery materializes.