Does high-fructose corn syrup cause cancer?

A new study shows that malignant cells love fructose, but the war against the sweetener isn't really about science 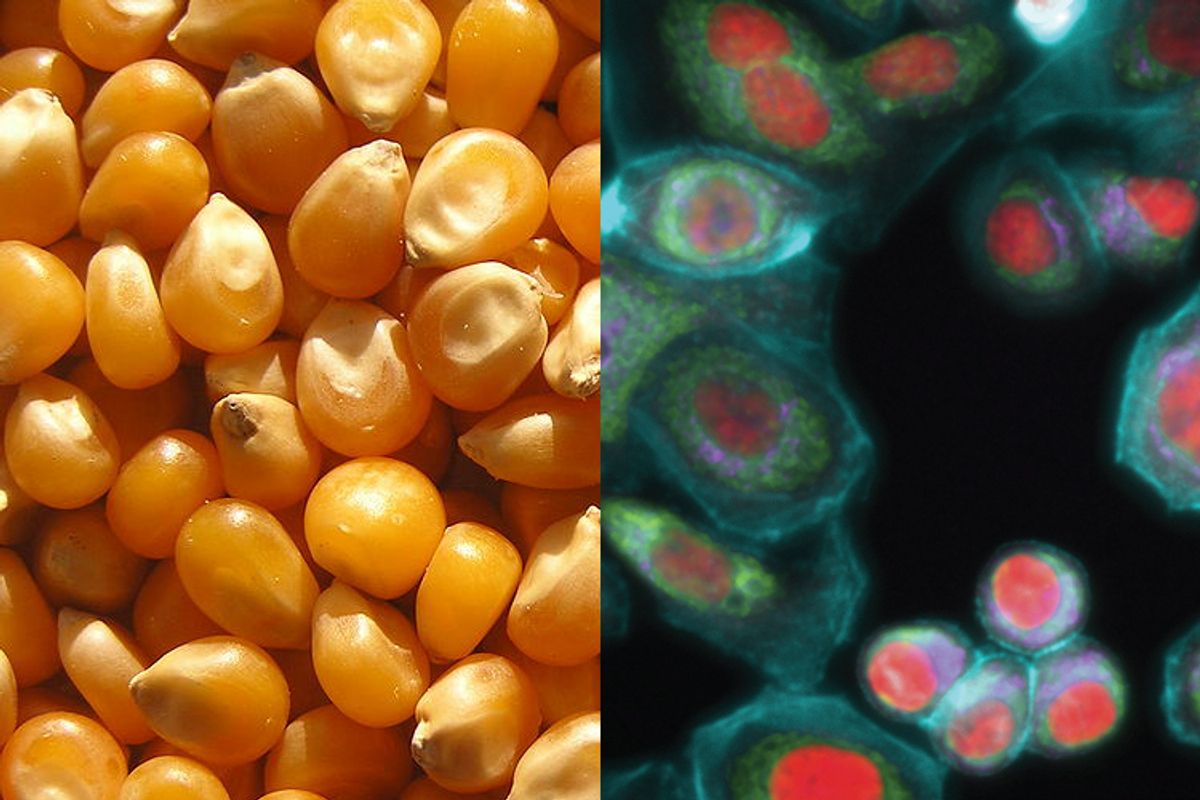 Not since olestra and its unfortunate propensity to cause "leakage" have we seen an industrial food get smacked around like high-fructose corn syrup. Despite protests that it's no different than sugar by groups with P.R.-unfriendly names like the Corn Refiners Association, "waning" would be a polite way to describe its popularity. And with the release of a new study that shows that cancer cells find fructose tastier -- and more nutritious! -- than other sugars, might the bell be finally tolling for the sweetener called, unappealingly, HFCS?

For years, consumers' wariness of HFCS's ubiquity and rumors that it causes anything from obesity to late-stage syphilis have beaten it down like a bag of doorknobs -- and food manufacturers have followed suit with products made with sugar instead. Its sales dropped 9 percent in the U.S. from 2007 to 2009, and are sinking fast. You know you have a P.R. problem when sodas tout themselves as healthy because all their empty calories come from sugar, not your cheaper sugar with a funny name.

All along, HFCS backers (mainly its producers and food manufacturers who like the fact that it's about one-third the cost of sugar) have maintained that there's no science to support the notion that it's any worse for you than sugar. Even Marion Nestle, chairwoman of the Food Studies department at New York University and one of the fiercest and smartest critics of our food system, writes on her blog that the science available now really shows it's just another form of sugar. And on the new study showing that cancer cells thrive on fructose, she e-mailed to me:

This is fructose they are talking about, not HFCS specifically. HFCS is not particularly high in fructose compared to table sugar. Both are about 50% fructose and are about equal in their effects. So is honey. Agave has even more. Fructose-containing sugars are best consumed in small amounts but there's nothing new in that advice. If it is true that the average American consumes 25% of calories from added sugars or even 20%, that means that 10% or more of the calories come from fructose. Not a good idea.

So this study isn't a scientific silver bullet against HFCS, but the war against HFCS has never been about science, really. It's always been about the fact that it's a backbone of corn subsidies that makes Midwest agriculture a massive corporate monoculture -- making it a favorite target of food activists -- and the paranoia we have of an ingredient with a distinctly processed-sounding name that we also happen to find in everything that has an ingredient label. It's always been about perception, not science.

And from that standpoint, it's easy to believe that this study damning fructose can, in fact, cream HFCS in the grocery store aisle. Forget the fact that the stuff is only called "high-fructose" because the sugar in corn naturally contains no fructose until it's processed to have some fructose; all we'll remember is that fructose is like beer at a cancer party, and the ketchup on the shelf has high-fructose corn syrup listed as the second ingredient. (And we'll probably really forget that fructose is, in fact, the sugar found in fruit.)

From an environmental and food policy standpoint, it's probably for the best that HFCS is going down. But the mechanism by which this battle is being won is a scary one. Our approach to healthy eating too often relies on single buzzwords -- demonize this, throw a halo around that. We might be smart in being wary of HFCS, but what that probably means is that we'll just be eating more sugar in its stead, just like when "healthy" cookie brands like Snackwells took off in the '90s, when we were happily trading empty fat calories with empty sugar calories. We haven't gotten any healthier since.