Holocartoons.com features an offensive set of anti-Semitic caricatures. Should we really be worried? 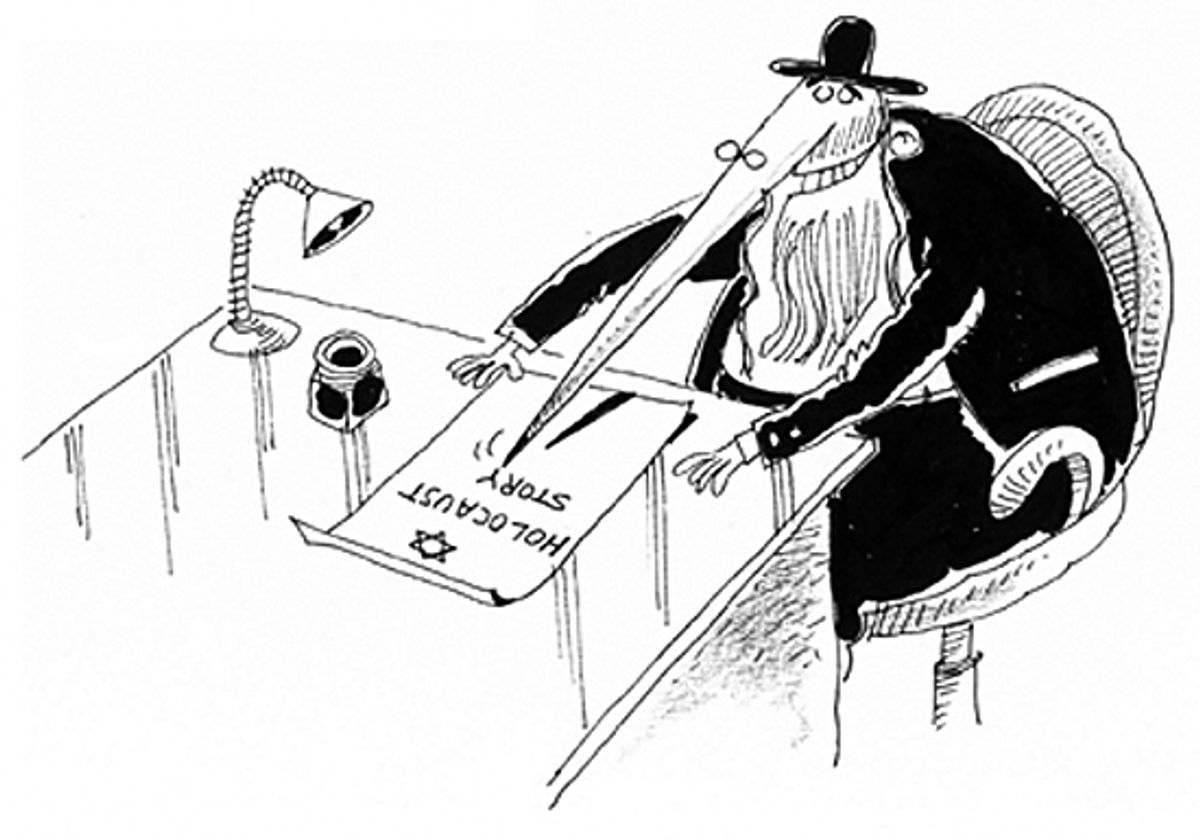 News services are abuzz with word that Iran has launched a new website challenging the historicity of the Holocaust. According to a report by Iran's Fars News Agency today (published only in Farsi), a non-governmental cultural institution calling itself the "Bulwark of Faith and Thought" has just unveiled an elaborate platform called Holocartoons.com, featuring a set of anti-Jewish caricatures already published in book form by artist Maziar B. in 2008.

The site, which one can only view with the help of high-speed Internet, comes in Farsi, Arabic, and English, and is counterintuitively accompanied by Henry Mancini's "Pink Panther" theme. A note at the beginning claims that Holocartoons is "dedicated to all those who have been killed under the pretext of the Holocaust." It goes on to claim that "the killing of 6 million Jews in the Second World War known as the Holocaust was a sheer lie." It depicts Hitler as a joke, gas chambers as a farce, and claims there were never more than 5.4 million Jews living in Europe in the first place. The murder of the Jews, it explains, was merely a concoction of Zionists to seize control of the Middle East and its resources.

Cartoons challenging the supposedly sacrosanct character of the Holocaust have been around for years, and multiplied after the Danish Mohammed cartoon controversy of 2005. The new website clearly fits into President Ahmadinejad's policy of delegitimizing the Jewish state by challenging one of its key justifications: providing a safe homeland for threatened Jews. As Ahmadinejad stated in a 2009 speech, "the issue of holocaust is an excuse by the war winners, particularly the US and Britain, for domination over the world ... After the war a political and power-seeking system which claimed to be defendants of some war victims said the survivors of these victims need to receive a blood-money and establishment of Zionist regime in Palestine is a part of the compensation ... If the reality of holocaust issue becomes clear, the Zionist regime will be fully collapsed."

Terrified yet? Normally you'd now expect the author of a piece like this to get all upset about those dastardly Holocaust-denying Iranians and start calling for some sort of retaliation. But I'm going to call their bluff and recommend that you do the same and actually read the thing. If you can endure the excruciating loading times and then commit to slogging your way through all the primitive, intellectually insulting drawings and boneheaded texts without nodding off, then maybe, Houston, we really do have a problem. But let me suggest that if this is the best Tehran can throw at the supposedly defenseless West, we can leave Houston to its own devices for some time to come. I mean, is this website really the 21st century equivalent of the Protocolls of the Elders of Zion or "Mein Kampf"? Sorry, I'm just not buying it.

So here's the site. Don't forget your pillow!