Reports of backroom deals by big players that would inhibit Web freedom are unconfirmed, but should make us uneasy 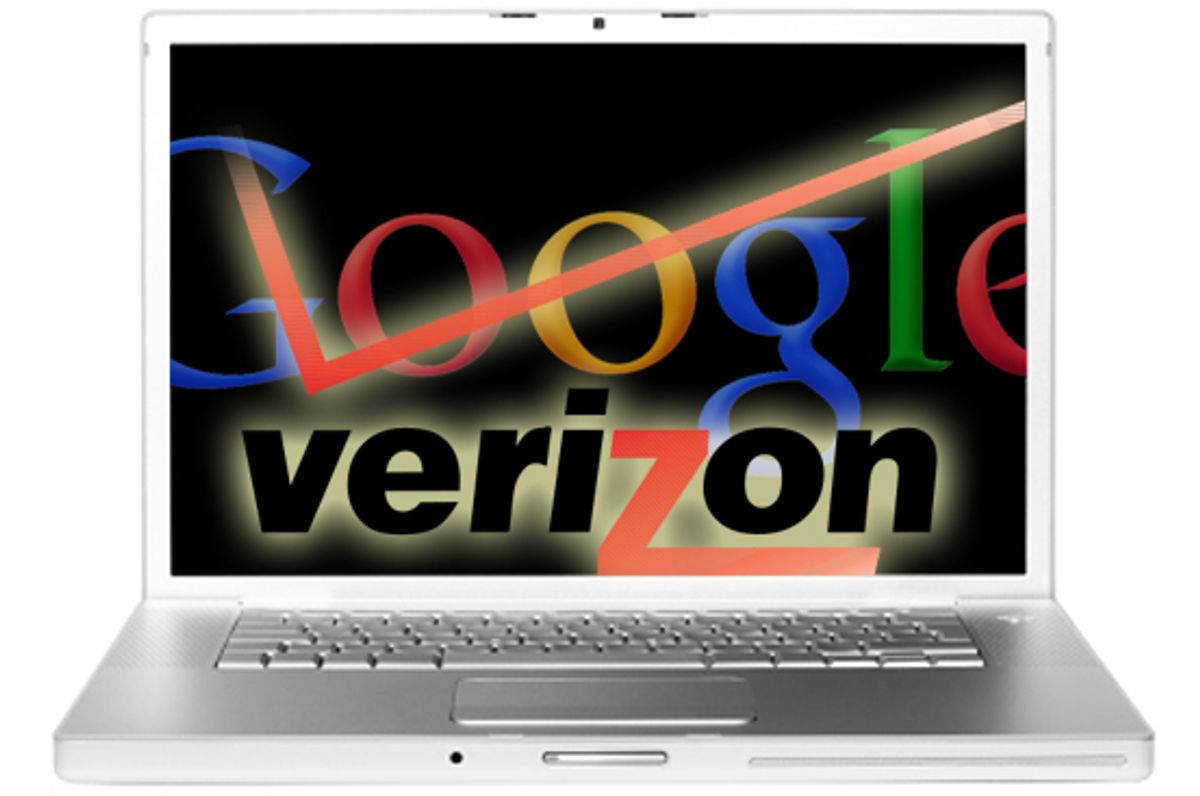 The Internet is abuzz with worries that the Bloomberg news service and the New York Times may have gotten it right in reports that Google and Verizon are cooking up a deal that, in the worst case, would be a blow to our digital future.

The story, denied by both companies (Google tweet, Verizon blog post) in language that gives them plenty of wiggle room, essentially says that the corporate giants are on the verge of an agreement that would, as the Times says:

allow Verizon to speed some online content to Internet users more quickly if the content’s creators are willing to pay for the privilege.

The charges could be paid by companies, like YouTube, owned by Google, for example, to Verizon, one of the nation’s leading Internet service providers, to ensure that its content received priority as it made its way to consumers. The agreement could eventually lead to higher charges for Internet users.

As countless commentators have already agreed, such a deal would mock something that Google has in the past adamantly maintained: the need for content-neutral treatment of what flows on the Net. It's usually called "network neutrality," and it means that Internet service providers -- typically your cable and phone company for home broadband connections -- should not get to decide what bits of data get delivered in what order and at what speed, if at all, based on who's providing those bits of information.

That is, Verizon should not have the right to decide that it will delay what you see from, say, Salon or my personal blog if Fox News pays Verizon to put its content in the queue first. Why not? Because Internet access is an oligopoly business, creating unprecedented (at least in modern times) choke points for information.

The Federal Communications Commission, which has been making noises about doing more to make net neutrality a requirement, has been holding semi-secret meetings with many of the top players in the online world. If you and I have been represented at that table, it's news to me, but this is how so much gets decided in our world. (UPDATE: The FCC has reportedly suspended the close-door meetings; good.)

Now we hear that Google -- once the foremost proponent of net neutrality and a participant at those meetings -- may be cooking up a deal with Verizon, which has also been at the FCC table. The scary thing is how plausible this is; Google is a huge company now with interests that may well be diverging from its previous commitments on the matter.

Google CEO Eric Schmidt, speaking yesterday at a conference, told reporters that the company isn't backing away in the least from the core principalprinciple (thanks, pragma). Speaking about network neutrality, he said, according to CNET:

"I want to make sure that everybody understands what we mean about it. What we mean is that if you have one data type, like video, you don't discriminate against one person's video in favor of another. It's OK to discriminate across different types ... There is general agreement with Verizon and Google on this issue. The issues of wireless versus wireline get very messy ... and that's really an FCC issue not a Google issue."

So is this about wireless or wired connections, or both? How does this square with the Times report saying that Google would pay Verizon to speed YouTube videos to users' computers? The murkiness of the entire thing is disturbing, which is one reason it feels too early to declare the imminent death of the Internet as we know it, as some commentators have done.

Take it for granted that the telecom companies will keep pushing for the right to control the content in the data pipes. They don't want you to remember that they built their networks in large part with the help of government-granted monopolies and other special help; that would make it harder to claim this absolute control.

The backroom dealing is a big part of the problem here. If the FCC wants to come up with the right policy, it should make transparency part of the method.

Schmidt is board chairman of the New America Foundation, a smart-thinking organization that has done a lot to elevate policy conversations in recent years. I hope he'll read and heed what the foundation said today in a statement:

During the 19th century a handful of wealthy industrialists dominated steel, oil refining and railroads; striking agreements to receive favorable terms for the carriage of their goods, while subjecting farmers and competitors to unreasonable and excessive charges.

Now, over a century later, history is in danger of repeating itself. After weeks of closed-door meetings sanctioned by the Federal Communication Commission, two of the largest corporations in the communications industry have reportedly negotiated an agreement on network neutrality. Though details of the agreement are not available, its terms are immaterial. It should not be the policy of the FCC to allow the largest companies to write the regulations that will determine the future of the Internet.

UPDATE: Scott Rosenberg wonders if the entire leak is just a head-fake, or possibly reflects dissent inside Google. Meanwhile, Google has put out a more strenuous denial, telling the Guardian, among others: "The New York Times is quite simply wrong. We have not had any conversations with Verizon about paying for carriage of Google traffic. We remain as committed as we always have been to an open internet."