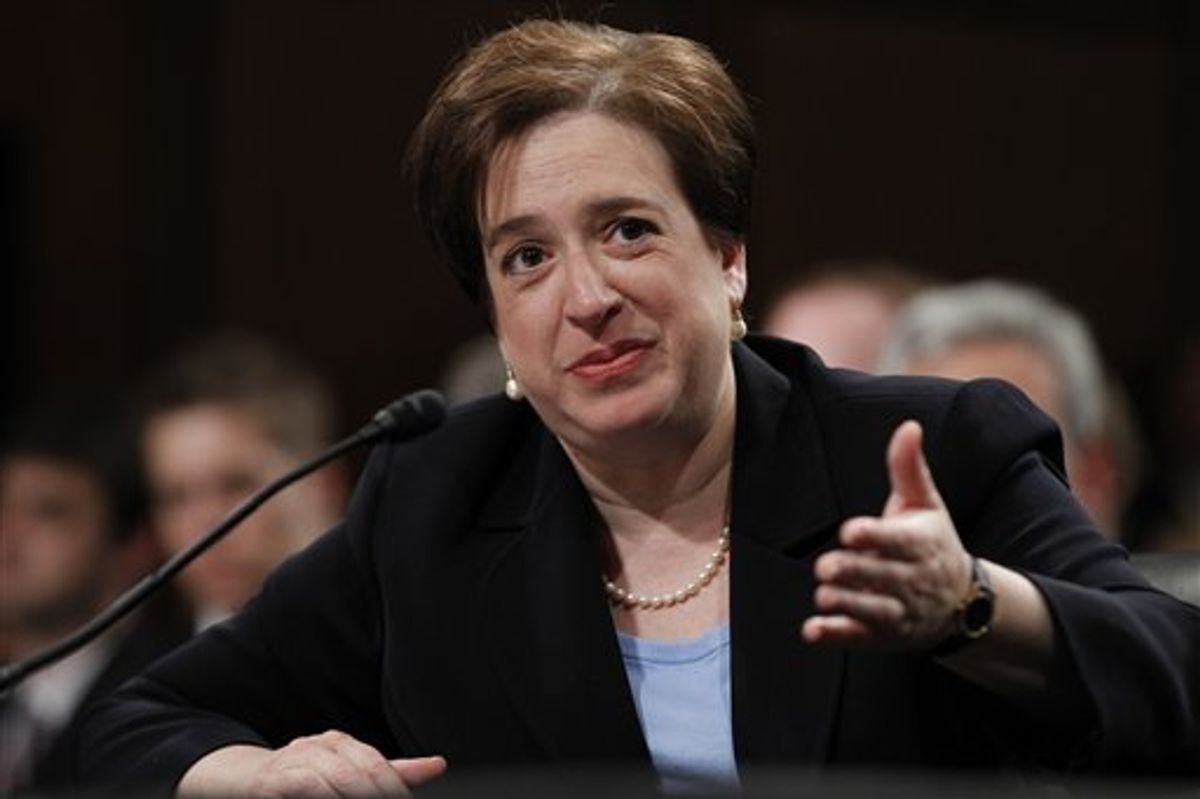 Supreme Court nominee Elena Kagan testifies on Capitol Hill in Washington, in this photo taken June 30, 2010. There was hardly a mention of it in her confirmation hearings last week, but Supreme Court nominee Elena Kagan raised hundreds of millions of dollars for Harvard Law School from wealthy donors while she was its dean. She could one day sit in judgment on cases involving some of those same donors. (AP Photo/Alex Brandon) (AP)
--

The Senate confirmed Elena Kagan Thursday as the Supreme Court's 112th justice and fourth woman, selecting a scholar with a reputation for brilliance, a dry sense of humor and a liberal legal bent.

Five Republicans joined all but one Democrat and the Senate's two independents to support Kagan. In a rarely practiced ritual reserved for the most historic votes, senators sat at their desks and stood to cast their votes with "ayes" and "nays."

Kagan watched the vote with her Justice Department colleagues in the solicitor general's conference room, the White House said.

Kagan isn't expected to alter the ideological balance of the court, where Stevens was considered a leader of the liberals.

But the two parties clashed over her nomination. Republicans argued that Kagan was a political liberal who would be unable to be impartial. Democrats defended her as a highly qualified legal scholar.

She is the first Supreme Court nominee in nearly 40 years with no experience as a judge, and her swearing-in will mark the first time in history that three women will serve on the nine-member court together.

Her lack of judicial experience was the stated reason for one fence-sitting Republican, Sen. Scott Brown of Massachusetts, to announce his opposition to her confirmation Thursday, just hours before the vote.

Though calling her "brilliant," Brown -- who had been seen as a potential GOP supporter -- said she was missing the necessary background to serve as a justice.

"The best umpires, to use the popular analogy, must not only call balls and strikes, but also have spent enough time on the playing field to know the strike zone," Brown said.

Democrats said Kagan could help bring consensus to the polarized court and act as a counterweight to the conservative majority that's dominated in recent years.

With her confirmation, Sen. Chuck Schumer, D-N.Y., said near the end of a three-day debate, "average Americans will be a step closer to once again having their voices heard in the highest court in the land."

Most Republicans portrayed Kagan as a politically motivated nominee who would allow her liberal views to interfere with her rulings, and use her post to push the Democratic agenda from the bench.

Kagan "is truly a person of the political left -- now they call themselves progressives -- one who has a history of working to advance the values of the left wing of the Democratic Party, and whose philosophy of judging allows a judge to utilize the power of their office to advance their vision for what America should be," said Sen. Jeff Sessions of Alabama, the top Republican on the Judiciary Committee.

A handful of Republicans broke with their party to back Kagan. They argued that partisanship should play no role in debates over the Supreme Court and have called Obama's nominee qualified.

Still, it was clear that unlike in past decades -- when high court nominees enjoyed the support of large majorities on both sides -- party politics was driving the debate and vote on Kagan, much as it did last year when the Senate considered Obama's first pick, Justice Sonia Sotomayor, and former President George W. Bush's two nominees, Chief Justice John Roberts and Justice Samuel Alito.

GOP senators have criticized Kagan for her decision as dean to bar military recruiters from the Harvard Law School career services office because of the prohibition against openly gay soldiers. Republicans spent the last hours of debate accusing her of being hostile to gun rights, and they have also spent considerable time criticizing her stance in favor of abortion rights.

Kagan revealed little about what kind of justice she would be in weeks of private one-on-one meetings with senators and several days of testimony before the Judiciary panel, despite having famously penned a law review article blasting Supreme Court nominees for obfuscating before the Senate. She dodged questions about her personal beliefs on a host of hot-button issues and declined repeatedly to "grade" Supreme Court rulings.

But her public appearances and documents unearthed from her time serving as a Clinton administration lawyer and domestic policy aide painted a portrait of the kind of personality she'll bring to the bench. She came across as a sharp intellect who enjoys the thrust and parry of legal debate, someone who's willing to throw elbows to make her opinions heard but nonetheless eager to facilitate consensus.

Kagan will be no stranger to the eight justices she is to join on the Supreme Court, having served as the government's top lawyer arguing cases before them in a post often referred to as the "10th justice." She's already friendly with a number of them, not least Antonin Scalia, the conservative justice who is her ideological opposite.

Kagan's nomination to a lifetime seat on the nation's highest court has drawn relatively little notice this summer, with the public and elected officials preoccupied by bad economic news and the Gulf oil spill, and many lawmakers nervously eyeing the November midterm congressional elections.

But senators used the debate to press dueling visions of the Supreme Court. Democrats say Kagan would be a mainstream, moderate counterweight to a conservative majority they say has defied Congress and ignored the Constitution in its rulings on issues such as workplace rights and campaign finance.

Republicans argued that Obama's choice of Kagan reflects Democratic attempts to pack courts with liberals who will mold the law to their agendas.

When sworn in, Kagan will join two other women on the court, Ruth Bader Ginsburg and Sotomayor, who was Obama's first nominee. Sandra Day O'Connor was the first woman appointed to the court, by President Ronald Reagan. She served from September 1981 to January 2006.