Gay couples flocked to San Francisco City Hall to get married after the fall of Prop. 8, but it wasn't quite time 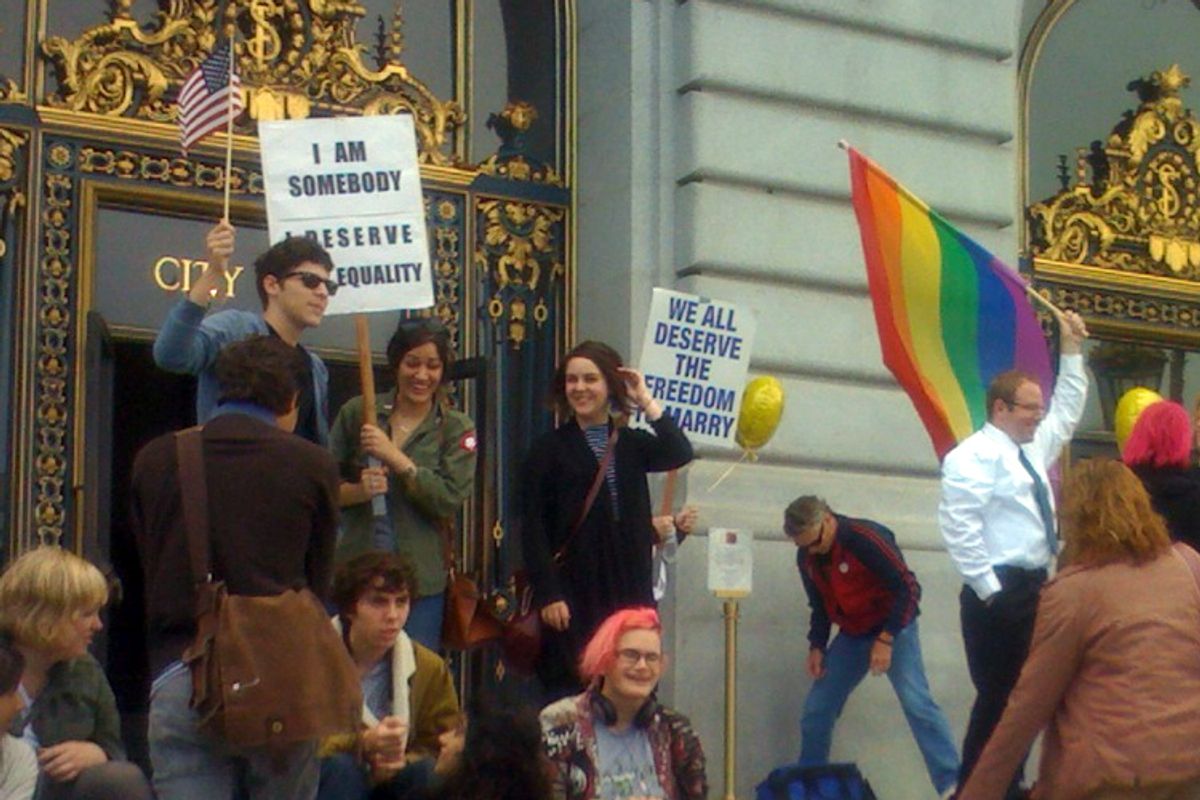 Opponents of Proposition 8 gather outside San Francisco City Hall after the news broke that the law had been struck down.
--

It's been a surreal San Francisco day: I learned about Judge Vaughn Walker's decision striking down Proposition 8 while waiting to go on "Hardball," where the plan was to discuss either the "ground zero mosque" controversy or the Proposition 8 decision, depending on when it came down. (In the end, the two are deeply related, but I'm getting ahead of myself.) I immediately went from sitting in front of a backdrop of our City Hall to City Hall itself, expecting to find couples marrying. But by the time I got there, Walker had stayed his own decision, knowing it was going to be appealed by his opponents.

People had already lined up at the City Clerk's office for marriage licenses, while city officials tried to figure out if they could issue them. Maria Ydil and Vanessa Judicta had been filling out their paperwork when Walker's stay was announced; I watched them have their civil union blessed on the grand stairway in City Hall, anyway. Hundreds of giddy activists had gathered outside and inside, hoping to either join or cheer on the kind of marriage parade we enjoyed in February 2003, when Mayor Gavin Newsom shocked the world by legalizing gay marriage in San Francisco, and then after the California Supreme Court upheld Newsom's decision in 2008. That led to the passage of Proposition 8, which Walker struck down as unconstitutional under the due process and equal protection clauses of the 14th amendment (that's right, the one Republicans now want to amend, to strip citizenship from the American-born kids of those here illegally). A happy marriage parade wasn't to be on Wednesday, but it's just a matter of time.

It was a joyous day at City Hall nonetheless. "We'll be back!" a gay man shouted to a friend, which was funny and fitting for a case known as Perry v. Schwarzenegger, even though our celebrity Republican governor refused to defend Proposition 8 in court. Schwarzenegger hailed Walker's decision today as affirming "the full legal protections and safeguards I believe everyone deserves." Another famous Republican, former Bush solicitor general Ted Olson, also applauded the ruling, of course; Olson joined David Boies to challenge Proposition 8 in court. "This is a victory for the American people. It's a victory for our justice system," Olson said, adding that the ruling "vindicates the rights of a minority of our citizens to be treated with decency and respect and equality in our system." Olson and Boies are best known for representing George W. Bush and Al Gore, respectively, in the disputed 2000 presidential election. So can't we all learn to get along, on this issue, anyway?

"To have Ted Olson team up with David Boies is as good as it gets," a smiling Gavin Newsom told reporters gathered in his office, just about an hour after Walker's decision was released. "The arguments and the evidentiary process they went through will make this a strong case" all the way to the Supreme Court, he predicted, because they were designed "to work at the Supreme Court level." That's getting ahead of the story; suffice it to say that Newsom was happy about Walker's ruling.

Prop. 8 supporters, predictably, were not. "Here we have an openly gay [according to the  San Francisco Chronicle] federal judge substituting his views for those of the American people and of our Founding Fathers who I promise you would be shocked by courts that imagine they have the right to put gay marriage in our Constitution," National Organization for Marriage chairwoman Maggie Gallagher said Wednesday. Expect opponents to use Walker's sexual orientation against him in the weeks and months to come. On the "Fox Forum" at FoxNews.com, law professor Gerald Bradley tried to smear Walker for bias, too, with a really novel argument: He wasn't saying Walker, a Ronald Reagan appointee, was biased because "he's openly gay," it was because "he might wish or even expect to wed should same-sex marriage become legally available in California." Did you follow that? Not because he's gay, but because he might avail himself of the right to a same-sex marriage?

But hey, it's a kind of progress when Fox commentators do their gay bashing, but try to deny it's gay bashing. That means they know it won't work with most of the country anymore. "That's disgraceful," Newsom said of the right's attempts to smear Walker, adding, "The Fox audience is better than that. They have gay members of their own family."

And on the other side, the Irish Catholic Newsom has members of his own family who oppose gay marriage. "I understand that good people can disagree on this, because good people I love disagree," including, back when he legalized gay marriage in San Francisco, his own father, a former judge. But back in 1967, he noted, when the Supreme Court struck down bans on interracial marriage, "70 percent of Americans opposed interracial marriage."

And 40 years later, of course, we elected a president who was himself the product of an interracial marriage. Walking into City Hall, I watched two black men hugging, and one, in tears, exclaimed, "It's Obama's birthday!" I smiled, and it made my head spin, a little bit. Despite his origins, our politically cautious president opposes gay marriage. And still the right rails against him; as a birthday gift, CNN released a poll finding that 40 percent of Republicans either doubt or don't believe that Obama was born in the United States.

Which brings me to the issue of the "ground zero mosque," about which cowardly Democrats have let Republicans fear-monger with little response. Yesterday, it was left to formerly Republican (now independent) New York Mayor Michael Bloomberg to make the most stirring defense of religious liberty I've heard, from anyone, in a long time, standing in front of the Statue of Liberty. Watch it if you haven't seen it yet. The right won't let up on its fear campaign, no matter how politically cautious Democrats try to be. Before I left for "Hardball," I tweeted: "Fox News Alert: Obama to perform gay marriages at Ground Zero Mosque," and people warned me not to start rumors, even in jest, that their birther relatives will start forwarding via e-mail. Gay marriage proponents won a battle today, but the war's still not over. It was a great day to be a San Franciscan anyway.

Oh, and you can watch Chris Matthews get me to thank Ted Olson in this video: