Tea Party isn't stalling, and Dems should be thankful

The backlash won't come in the Republican primaries. It will come in November 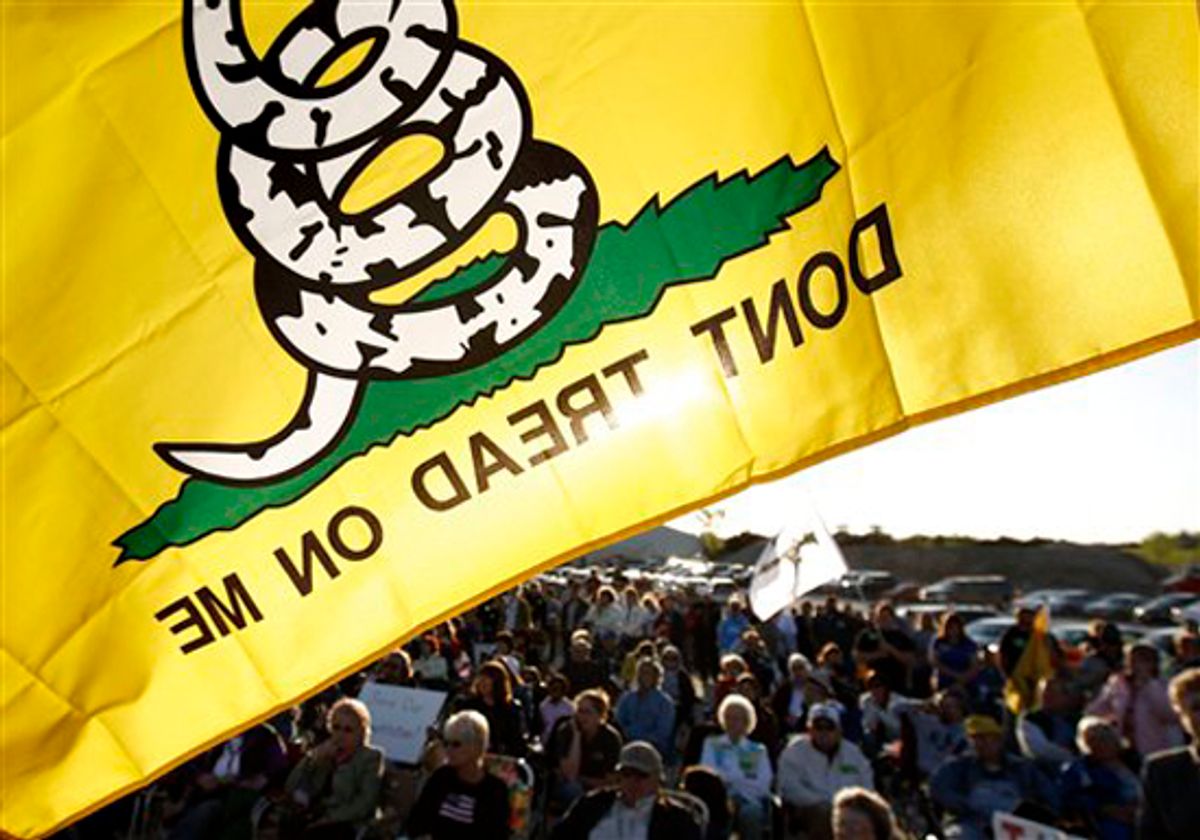 A Don't Tread On Me flag flies over protesters during a rally at Leo O'Laughlin Inc. on the eve of President Barack Obama's visit to Macon, Mo. Tuesday evening, April 27, 2010, in Macon. The protest was organized by the Missouri Republican Party and a tea party group called the Macon County Patriots. (AP Photo/Patrick T. Fallon) (Patrick Fallon)
--

On MSNBC last night, Keith Olbermann suggested that the momentum of the Tea Party movement may be stalling.

But that's not really a fair conclusion. There actually wasn't anything extraordinary in any of the results Olbermann cited.

Take the Kansas Senate primary, in which Rep. Todd Tiahrt was edged out by Rep. Jerry Moran. Sure, Tiahrt's Tea Party credentials were unimpeachable -- but Moran's weren't half-bad, either: He was endorsed by the Senate's preeminent Tea Partier, Jim DeMint, and he actually joined Michele Bachmann's Tea Party Caucus in the run-up to the primary.

The results in Missouri's Senate primary, where Rep. Roy Blunt, the establishment's favorite, crushed an unknown and underfunded challenger who claimed the Tea Party mantle, were no more remarkable, since we’ve seen other establishment Republicans post similar victories this year. And in Michigan's gubernatorial primary, a (sort of) moderate Republican used catchy TV ads to fend off three foes who'd spent the campaign battling each other for Tea Party supremacy.

This is all pretty much consistent with what we've seen this year. The Tea Party -- which, demographically, represents the disgruntled base of the Republican Party -- has united in several high-profile instances to stun the party establishment and win primaries: Sharron Angle in Nevada, Rand Paul in Kentucky, Marco Rubio scaring Charlie Crist out of the GOP in Florida, and so on. It has failed to unite and muster much of a fight in many instances, too -- which is why, for example, Mark Kirk coasted in Illinois' GOP primary, Dan Coats emerged in Indiana, and Mike Castle never had to sweat in Delaware.

In other words, the Tea Party has no more or less momentum now than it did a few weeks or even a few months ago. In fact, a Tea Party favorite, Ken Buck, may well be on his way to winning a Senate primary in Colorado next week.

To be sure, there may well be a Tea Party backlash this year. But it won't be in Republican primaries; it will be in the general election. In fact, we're already starting to see it. By all measures, Harry Reid should be losing by double digits in Nevada right now. But the fringe views and bizarre conduct of his Tea Party-championed challenger, Sharron Angle, have given him a slight lead -- a stunning development for an incumbent with poll numbers as poisonous as Reid's.

And Nevada is just one example. There are a handful of key races this year in which the taint of the Tea Party could cost Republicans seats that, with generic, inoffensive candidates, they'd easily win. So, no, the Tea Party hasn't lost its momentum. It's alive and well. And Democrats should be thankful for that.