Hard times? TV can be your lottery ticket

If you can get your sob story on the tube, you're gold. But what about the other millions of desperate Americans? 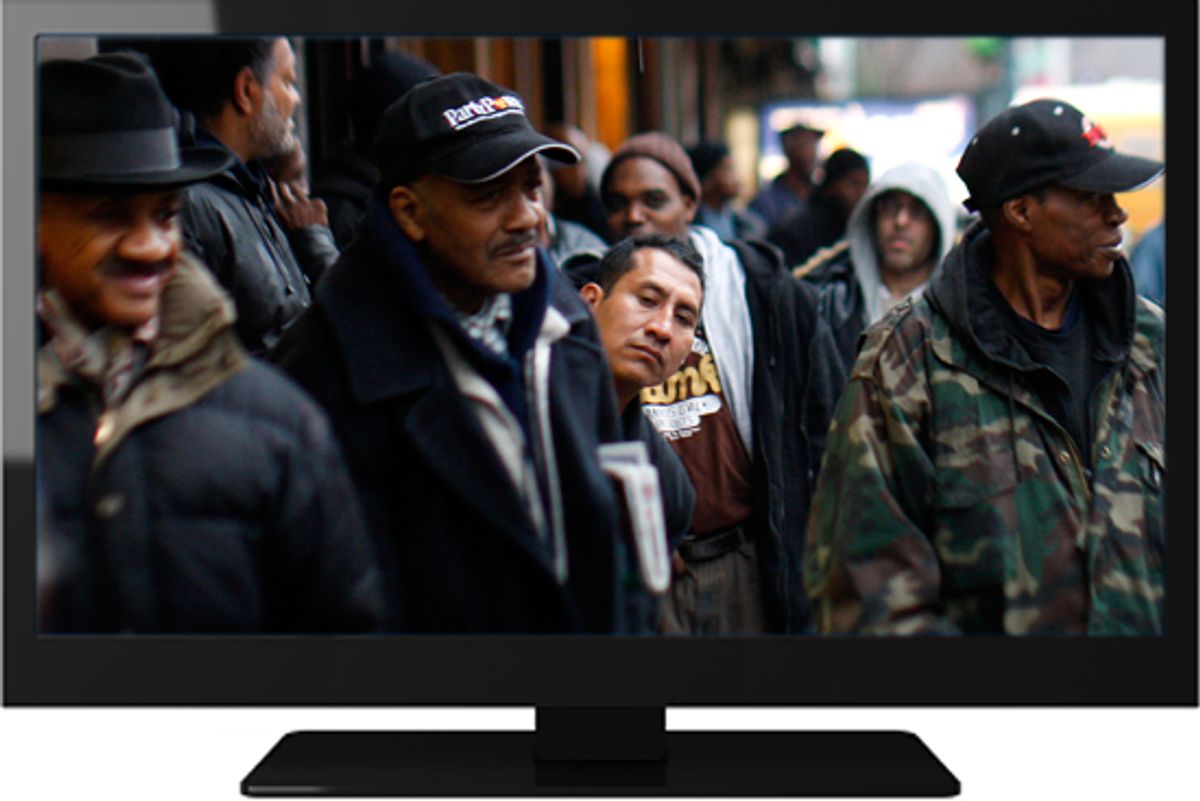 A food line at the Community Kitchen in Harlem
--

Ok, here's a smile: update on our doc on recession/poverty. I love America

Here's the text you get when you "share" the video report Curry's tweeting about:

A development to the story we brought you about struggling families in Ohio who have been pushed over the edge by this recession. ††There's been a response from people wanting to help.

So it's that old TV thing. NBC does a story on "Dateline" about families struggling through the recession in rural Ohio, and letters and donations and job offers come pouring in from all over the country.

The retired Air Force vet has "job offers in Pennsylvania, Virginia, Arizona, Iowa." Someone sent him $5,000. A woman reads through tears from a letter she's received: "In a couple of weeks I will be able to send you some money to help with expenses. I hope this letter raises your spirits and that you know I really do care. Most of all, you have a friend in me. You are going to be OK, and so are your children. I will be thinking of you, sweetie, and praying that lots of other people send you much-needed money."

She says, "It's really hard to believe that someone you've never met could actually care that much."

The food pantry lady has gotten 500 phone calls and donations from Texas, California, Florida, Iowa, Massachusetts, Maine and Canada. She says, "I just can't even describe how good it feels to know that there are so many people out there that really do care."

This is absolutely par for the course, it's what happens every single time there is a sob story on the TV, but here's the thing: People don't care. They just respond to what's on television.

Curry, who is among the best in the business and whom I don't mean to beat up on, gets "a smile" out of this, as she should. She did a good piece about people who are struggling, her viewers responded in overwhelming fashion and the people she reported about are deeply moved by their good fortune.

If you focus in tightly enough, it really is a wonderful thing. That a relatively tiny group of people in Ohio actually did get a lot of help they weren't going to get without that TV report. It was like a little miracle, and you'd have to have a hard heart indeed not to be touched by the young mom reading the letter or the hardworking food pantry lady who is suddenly able to provide so much more help to so many more people. I love America too.

But back your view out to the larger picture and what you see is something much more depressing.

Obviously, the people who sent money and goods and job offers had both the means and willingness to help their neighbors in need, but instead they helped some people they saw on TV. Now, I suppose it's possible that every one of them, from the donor of $5,000 to the Hefty bag guy from Cincinnati to the job offerers in Pennsylvania, Virginia, Arizona and Iowa, is doing just as much for lots of other people closer to home and not on the TV.

I would just be willing to bet a lot that they aren't.

What Curry's story suggests is that the generosity of the American people can solve the problems of a lot of folks who need help -- as long as they can get on TV. Getting on TV is a lottery ticket, and the depressing part of it is that if you're in trouble, your chances of getting on TV are about the same as your chances of winning the lottery.

What about all the desperate people who didn't have a TV network drop out of the sky into their local food pantry? How do we turn their story into "a smile"? Because there are clearly people out there willing to help. There just isn't enough TV to go around.