Campbell to court: I didn't know it was a diamond 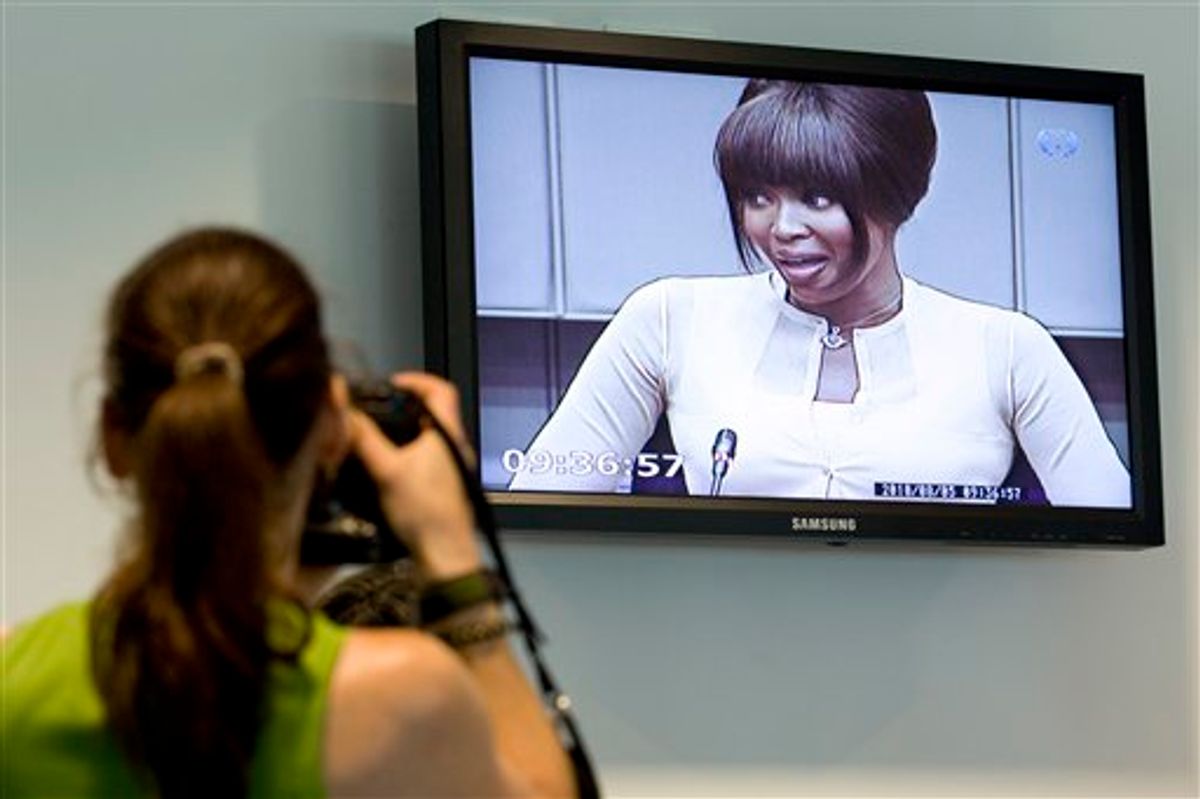 Naomi Campbell is seen on a screen in the pressroom of the U.N.-backed Special Court for Sierra Leone in Leidschendam, Netherlands, Thursday, Aug. 5, 2010. Naomi Campbell appeared at a Dutch courthouse to give evidence at the war crimes trial of former Liberian ruler Charles Taylor after the supermodel lost her battle to avoid testifying. Campbell will be questioned about claims made by actress Mia Farrow that Taylor gave the British model an uncut diamond after a dinner party hosted by Nelson Mandela in South Africa in 1997. Prosecutors say if that's true, it's evidence that he received diamonds from Sierra Leone rebels in exchange for weapons during that country's 1992-2002 civil war. The court did not give permission to take photos of Naomi Campbell inside the courtroom. (AP Photo/Vincent Jannink) (AP)
--

Naomi Campbell testified before a war crimes tribunal Thursday that she had received some "dirty-looking stones" after a 1997 dinner party with former Liberian ruler Charles Taylor. Still, the supermodel said she didn't know if the stones were actually diamonds or if the gift came from Taylor himself.

Campbell, an extremely reluctant witness at the Special Court for Sierra Leone, was being questioned in Taylor's war crimes trial about claims made by actress Mia Farrow. Farrow had said Taylor gave the model an uncut diamond or diamonds after an event hosted by then-South African President Nelson Mandela at his presidential mansion in Pretoria.

Prosecutors say from his seat of power in Liberia, Taylor armed, trained and commanded Sierra Leone rebels who murdered and mutilated thousands of civilians across the border. Taylor, 62, says he is innocent of the 11 war crimes charges he faces, including murder, rape, sexual enslavement and recruiting child soldiers.

After fighting for months to avoid testifying, Campbell arrived at the courthouse in Leidschendam surrounded by a police escort. In contrast to her usual edgy fashion style, the British supermodel wore a demure cream two-piece outfit and piled up her straight dark hair into a classic chignon. The look was topped off with a silver "evil-eye" necklace.

Entering the courtroom fashionably late -- several minutes after she was first summoned to take the stand -- Campbell was calm and composed as she quickly answered questions from prosecutor Brenda Hollis for nearly two hours.

"I didn't really want to be here," she said. "I just want to get this over with and get on with my life, this is a big inconvenience for me."

Campbell had declined to cooperate with prosecutors until judges last month ordered her to appear or face a possible sentence of up to seven years for contempt.

Speaking confidently Thursday, Campbell testified that she was awakened in the middle of the night after the September 1997 dinner party by two men at her door. She said they offered her a pouch they said was a gift for her with no further explanation.

She said she frequently receives gifts from admirers and didn't look at it until the following morning.

"I saw a few stones in there. And they were small, dirty-looking stones," she said.

She said, at breakfast the following day, either Farrow or Campbell's former agent Carole White had told her the rocks must be diamonds and were probably a gift from Taylor.

Campbell said she gave the stones to a friend, Jeremy Ratcliffe, who was the director of the Nelson Mandela Children's Fund, intending he use them for charity. She said she had called Ratcliffe a year ago to ask what he had done with the stones, and he told her he still had them.

It was the first time Ratcliffe's name had appeared at the trial. He is still a trustee of Mandela's charity but it was not immediately possible to reach him Thursday. There was no response to phone calls to his South African homes in Johannesburg or Plettenberg Bay or to his cell phone.

Hollis asked Campbell why she had been so reluctant to appear before the war crimes tribunal, and the model said she was afraid to be associated with Taylor.

"This is someone that I read up on the Internet that killed thousands of people supposedly and I don't want my family in any danger in any way," Campbell said.

Campbell had been called to the stand by the prosecution, but she often seemed more comfortable answering questions from Griffiths, the defense attorney. Griffiths got Campbell to testify that some statements about the dinner given to prosecutors by Farrow and White were wrong. He said White has suggested that Campbell was seated next to Taylor at the dinner and flirted with him.

White is enmeshed in a legal dispute with Campbell.

"This is a woman who has a powerful motive to lie about you?" Griffiths asked.

"Correct," Campbell answered, with a slight smile. She said she sat between Mandela, whom she idolizes, and music producer Quincy Jones at the dinner.

Appearing to take great pains to distance herself from former Liberian president, she repeated several times that she couldn't verify the stones were diamonds or that they came from Taylor.

She said Farrow had suggested they came from Taylor, and she merely agreed. She added she has never seen Taylor before or since that dinner.

Both White and Farrow are to testify before the war crimes tribunal on Monday.

Frustrated by Campbell's answers, Hollis said Campbell appeared to be downplaying her friendliness with Taylor, pointing to a photograph in which they were standing next to each other at the dinner.

But Griffiths said it wasn't right for the prosecution to challenge the credibility of its own witness, and Judge Julia Sebutinde agreed. Hollis then argued Campbell should be considered a court witness, given that she had stonewalled prosecutors ahead of Thursday's testimony.

"You subpoenaed her and it was a prosecution witness," Sebutinde retorted.

Taylor, sitting in the defendant's chair, smiled at the exchange. In custody in the Netherlands since June 2006, he is the first former African head of state to stand trial at an international war crimes court.

International law experts said Thursday's testimony by Campbell was unlikely to affect the course of Taylor's trial. But media turnout was extremely heavy, with more reporters and television crews attending than at any time since the trial began in January 2008.

"This whole episode with Naomi Campbell being called to testify, what's welcome about that is that it's thrown the international media attention back on to the issue of blood diamonds," Global Witness spokesman Oliver Courtney told AP Television News. "This is a problem that hasn't gone away, as we see continued human rights abuses linked to diamonds in countries like Zimbabwe."

Campbell became one of the world's highest-paid models after being discovered while shopping in London at age 15. Now 40, the hot-tempered supermodel is no stranger to courtrooms, having faced a series of minor lawsuits and criminal cases over the years.

In June 2008 she pleaded guilty in an incident where she cursed, kicked and spat at police at London's Heathrow airport in a rage over a missing piece of luggage. She was sentenced to 200 hours of community service for that.

Campbell also did a week of community service sweeping floors and scrubbing toilets in a Manhattan garbage-truck garage in 2007 after pleading guilty to misdemeanor assault for hurling a cell phone at her maid because of a vanished pair of jeans.

In 2000, Campbell pleaded guilty in Toronto to an assault charge for beating an assistant who said the model whacked her on the head with a phone.

A few of Campbell's former aides and maids have sued her, accusing her of violent outbursts; some cases have been settled on undisclosed terms.