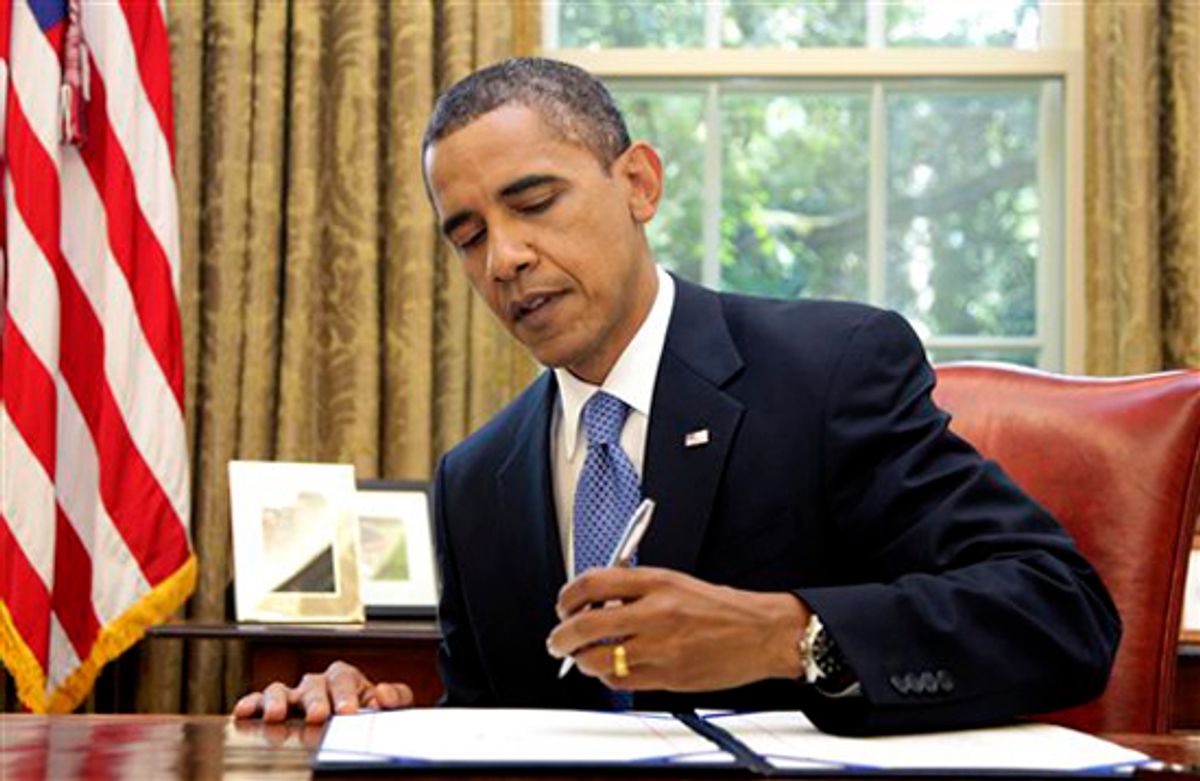 Could it be that Barack Obama's fate as president was actually sealed just three weeks after he took office?

The question doesn't seem that absurd this morning, with yet another new monthly jobs report painting the same bleak picture we've been looking at for a while: a stalled unemployment rate, anemic private sector growth, and little reason to believe a strong recovery is either underway or just around the corner.

The report pegged the unemployment rate for July at 9.5 percent (16.5 percent when you factor in those who didn't actively seek work last month), with 20,000 fewer private sector jobs created than had been forecasted. The recession, we are told, actually ended a while ago, but recovery, as one economist told the New York Times this morning, is so weak that "you sometimes need a magnifying glass to see it."

All year, the unemployment rate has danced between 9.5 and 10 percent, with generally discouraging underlying data. Joblessness isn't surging like it was in 2008 and 2009, but it's not coming down either. Which brings me back to the earliest days of Obama's presidency: To look at the current reality is to conclude that the $787 billion stimulus package passed by the Senate on Feb. 13, 2009 -- back when Obama was still basking in his honeymoon and optimism was high -- was woefully inadequate.

Certainly, that point was made at the time by some, most notably Paul Krugman. Of course, Obama's hands were tied back then by near-uniform Republican opposition. If the stimulus was smaller than it needed to be, it was also the biggest package that could have still secured the needed 60 votes in the Senate. (It ended up passing by a 60-38 margin.) The hope was that the package Obama signed would give the economy a good kick-start and that, if need be, he could go back to Congress later, point to the progress, and ask for more.

But that was never going to happen. Obama's job approval rating, as it was destined to do, only declined. This only encouraged Republicans to dig in their heels more. And it only made Democrats, fearful of deep midterm losses, resistant to the idea of a second big stimulus. So, but for a few relatively small steps, there has been no significant follow-up to the "triumph" of February 13, 2009. And now, 18 months later, we're seeing the consequences.

The short-term political cost for the White House and Democrats will almost certainly be a rough November election -- but that was going to happen anyway. Even with more aggressive steps, the economy was never going to be that vibrant this year. So, given the high number of swing districts carried by Democrats in 2006 and 2008 and the "buyer's remorse" nature of midterm campaigns, 2010 was always going to be a GOP year.

The real threat to Obama and his party is longer-term. I've frequently drawn parallels between 1982 -- when Ronald Reagan and the Republicans faced similarly high unemployment numbers and were drubbed in the midterm elections -- and 2010. After all, Reagan and Obama faced roughly the same unemployment rate when they took office -- and in both cases, it grew quickly. For July 1982, joblessness stood at 9.8 percent, not far from today's 9.5 percent.

Under Reagan, though, the unemployment rate rose sharply, then declined precipitously -- in plenty of time to hand him a rousing landslide in his 1984 reelection campaign. The actual reason for this phenomenon may have had little to do with his policies (as Krugman has noted), but that didn't matter to voters.

It could be that a similar sharp decline in joblessness is on the horizon now, and that we just don't know it. But today's numbers sure aren't encouraging. And if stagnant unemployment becomes the new reality, then Obama may find it impossible to replicate the political recovery that Reagan enjoyed in the third and fourth years of his presidency. And if that's what happens, then we may end up looking back on the earliest days of the Obama presidency as the beginning of its end.