The alleged political benefits of moderation

Despite being the "safe" choice, Kagan is confirmed with fewer votes and less public support than Sotomayor 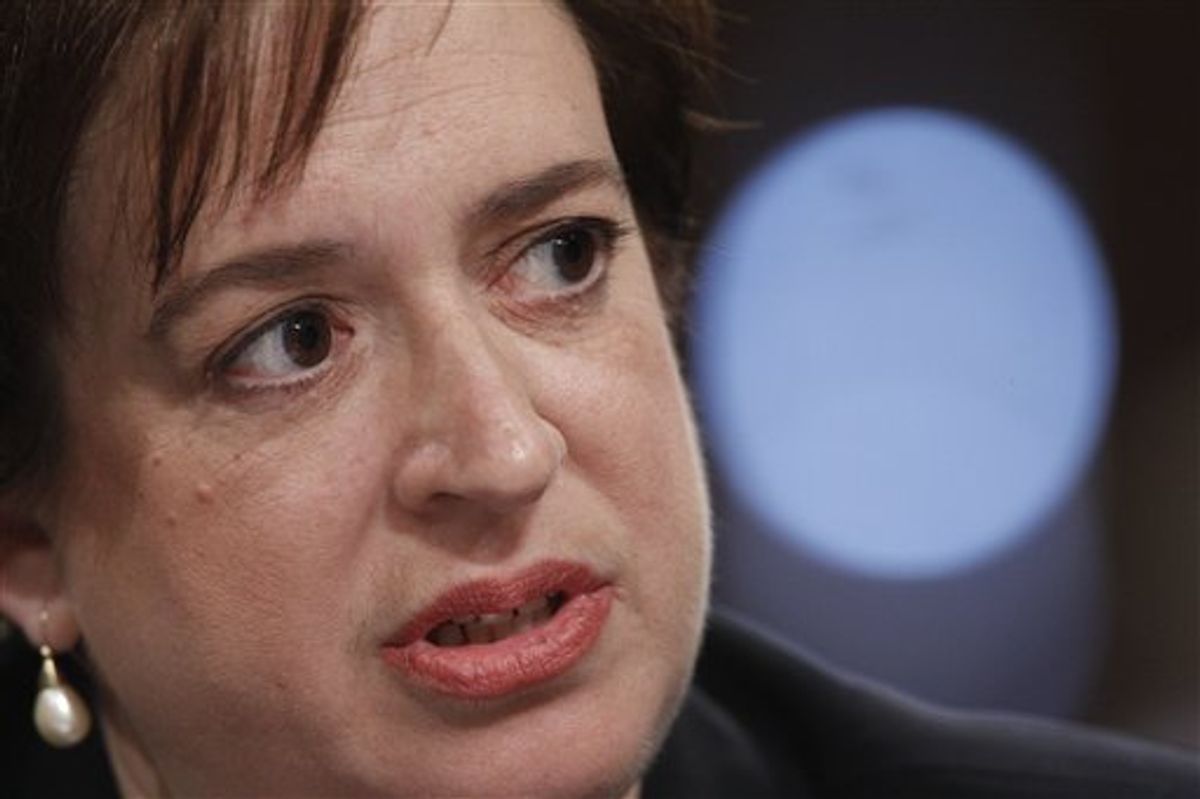 Supreme Court nominee Elena Kagan testifies on Capitol Hill in Washington, in this photo taken June 30, 2010. There was hardly a mention of it in her confirmation hearings last week, but Supreme Court nominee Elena Kagan raised hundreds of millions of dollars for Harvard Law School from wealthy donors while she was its dean. She could one day sit in judgment on cases involving some of those same donors. (AP Photo/Alex Brandon) (AP)
--

My advocacy against the choice of Elena Kagan to replace Justice Stevens largely ceased once she was selected because, as I always acknowledged, her confirmation would be virtually inevitable if she were chosen.  So uninspiring was Kagan's nomination that one should be forgiven for not having noticed that the Senate yesterday confirmed her appointment to the Supreme Court.  It was actually painful watching progressive Democratic Party judicial advocacy groups trying dutifully to pretend with their Press Releases yesterday that there was something significant or exciting to celebrate.  In any event, I'd like to make two points about this episode.

First, this new Washington Post article analyzes the likely impact of Kagan and bears this headline on the Post's main webpage:  "Court ideology unlikely to shift."  The article itself similarly predicts that "her confirmation is considered unlikely to immediately shift the court's ideology."  But then this sentence appears:

Although she is expected to fit comfortably within the liberal wing of the court, she does not seem to be as liberal as Stevens was during his final years on the bench.

Doesn't that negate, or at least strongly undermine, the article's principal claim that she will likely have no ideological effect on the Court?  If it's true that she'll be less "liberal" than Stevens -- which was a leading objection for the start for those who urged Obama not to select her -- then doesn't that mean, by definition, that she will move the Court to the Right?  Unless we're still indulging this fantasy that Kagan -- through the sheer force of her personality and supernatural skills of conciliation -- will ascend into the Court and begin magically hypnotizing Justice Kennedy and the other conservative justices to change their views in a way that Justice Stevens could not (despite his being renown for having a close relationship with Justice Kennedy), doesn't this acknowledgment by the Post mean that the most likely impact of Kagan's confirmation is a right-wing shift?  The way to assess a new Justice's impact is by evaluating where they fall on the spectrum not in absolute terms, but in comparison to the Justice they are replacing.

That said, I became slightly more comfortable with Kagan once I watched her hearing, even as vapid and hollow as that hearing was (though it was mildly more informative than the completely farcical Sotomayor and Roberts hearings).  She's intelligent in the extreme, and I do expect her to vote reliably with the Breyer/Ginsberg/Sotomayor bloc on most issues, with the exception that she'll likely be far more deferential to Obama administration positions generally and assertions of executive power specifically.  But the case against Kagan from the start was that the Justice she would replace was the leader of the "liberal" wing of the Court and its most emphatic advocate, and that replacing him with a more moderate Justice (even one who would be reliably Democratic) would move the already right-wing Court further to the Right -- not radically, but marginally.  As the Post article today inadvertently suggests, that seems as likely as ever after her confirmation hearing.

The second point concerns the "justification" repeatedly offered for Obama's having nominated someone with such a sparse record:  namely, that Democrats -- not just with Court nominees but in general -- must rely on stealth maneuvers, moderate-appearing advocates, and blank-slate nominations because doing so is politically necessary.  This is the same genre of excuse the Democratic establishment and its supporters offer for much of what it does.  The Kagan nomination should bury this false excuse-making for good.

Obama's prior Supreme Court nominee, Sonia Sotomayor, was the anti-Kagan (which is why I vigorously supported her nomination):  she had 15 years of judicial opinions behind her, so that everyone could see what kind of judge she would be.  Beyond that, she had given numerous speeches and interviews on a variety of difficult topics and had advocated for controversial views, because she didn't adopt a pathologically risk-adverse approach to succeeding in life.  And what was the outcome?

Sotomayor was confirmed with 5 more YES votes -- and 6 fewer NO votes -- than Kagan (68-31 for Sotomayor v. 63-37 for Kagan).  Beyond that, Sotomayor was substantially more popular with the public than Kagan.  From Gallup earlier this week:  "Compared with public support for Sotomayor at a similar point on her path to the high court, support for Kagan is lower across the board -- including across gender, age, and political lines."  Indeed, Kagan is the first Supreme Court Justice in the last 25 years to be confirmed to the Court with less than 50% public approval: 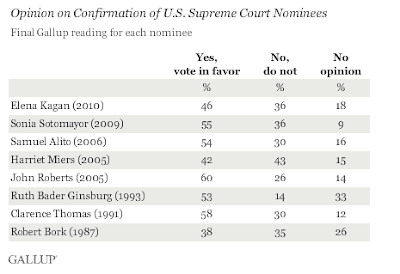 In other words, the supposedly safe, moderate-appearing, blank slate nominee (Kagan) received fewer confirmation votes, and was less politically popular, than the supposedly risky, clearly liberal nominee with a long record of judicial opining and controversial statements (Sotomayor).  Aren't there important lessons in those facts?  Doesn't that rather clearly contradict the endless excuse-making from the Democratic establishment that muddled moderation is politically necessary?  If you're going to attract a tiny handful of GOP votes no matter what, why not nominate someone who will enliven the public, inspire your base, and provide an opportunity to advocate and defend a progressive judicial philosophy?

The reality is -- and this has long been clear -- that Americans have little respect for, and even less interest in, people who stand for nothing and seem afraid of their own belief system.  Clarity of principle and courage of conviction are almost always more politically appealing than muddled incoherence, calibrated careerism, or muted cowardice.  The GOP's recognition of this fact was the primary cause of George Bush's otherwise inexplicable political success (the key line from his 2004 RNC Convention acceptance speech:  "Even when we don't agree, at least you know what I believe and where I stand").  And many of the Democrats' failures have been due not to excessively strong advocacy of liberal views, but to the opposite:  confusion about what they believe, if anything.

UPDATE:  Jonathan Bernstein, who is on a perpetual quest in life to shield Barack Obama from blame for anything, has convinced himself -- without citing a shred of data -- that the approval ratings of Supreme Court nominees are determined by the popularity of the President who  nominates them (and therefore, needless to say, criticisms over Obama's choice of Kagan are misguided).  He asserts that "support for nominees appears to be highly correlated with presidential approval levels" and thus:

Kagan almost certainly did worse than Sotomayor not because of anything having to do with them as Court candidates, but because Barack Obama was far more popular in spring 2009 than in spring 2010.

Someone should tell Bernstein that George W. Bush was quite unpopular in 2005 and 2006 -- certainly more unpopular than Obama is now.  Despite that fact, Bush's Supreme Court nominees during that time (John Roberts and Sam Alito) were quite popular, especially Roberts -- the most popular nominee of the last 25 years, who was more popular than Sotomayor and far more popular than Kagan, despite the fact that Bush had fallen to 39% approval ratings at the time of confirmation.  By 2006, Bush's approval ratings had collapsed to humiliating levels (33%), yet his 2006 nominee (Alito) was quite popular -- also far more popular than Kagan.  Those facts negate Bernstein's evidence-free belief that what determines the popularity of a nominee is the popularity of the President.

Beyond that, Ronald Reagan had healthy approval ratings in 1987 -- the same time when his nominee, Robert Bork, received the lowest public approval rating of any nominee of the last 30 years, and was ultimately rejected.  Moreover, as the Gallup chart I excerpted above reveals, the most unpopular nominee since Robert Bork was Harriet Miers, nominated the very same year as the highly popular Roberts.  Despite being nominated close to Roberts in time, she had 18 points lower public approval than Roberts did.  That further demonstrates that it is the nominee -- not the popularity of the President -- which is the most significant factor in determining the nominee's popularity.  How else to explain the vastly disparate approval ratings of two Bush nominees (Roberts and Miers) nominated in the very same year?

Now I see why Bernstein cited no evidence for his claim that "support for nominees appears to be highly correlated with presidential approval levels":  because none exists.  Virtually all the available evidence provided here proves exactly the opposite of what the Obama-defending political scientist claims.