Women flock to Bali to live out Elizabeth Gilbert's love affair. I made fun of them -- then I became one of them 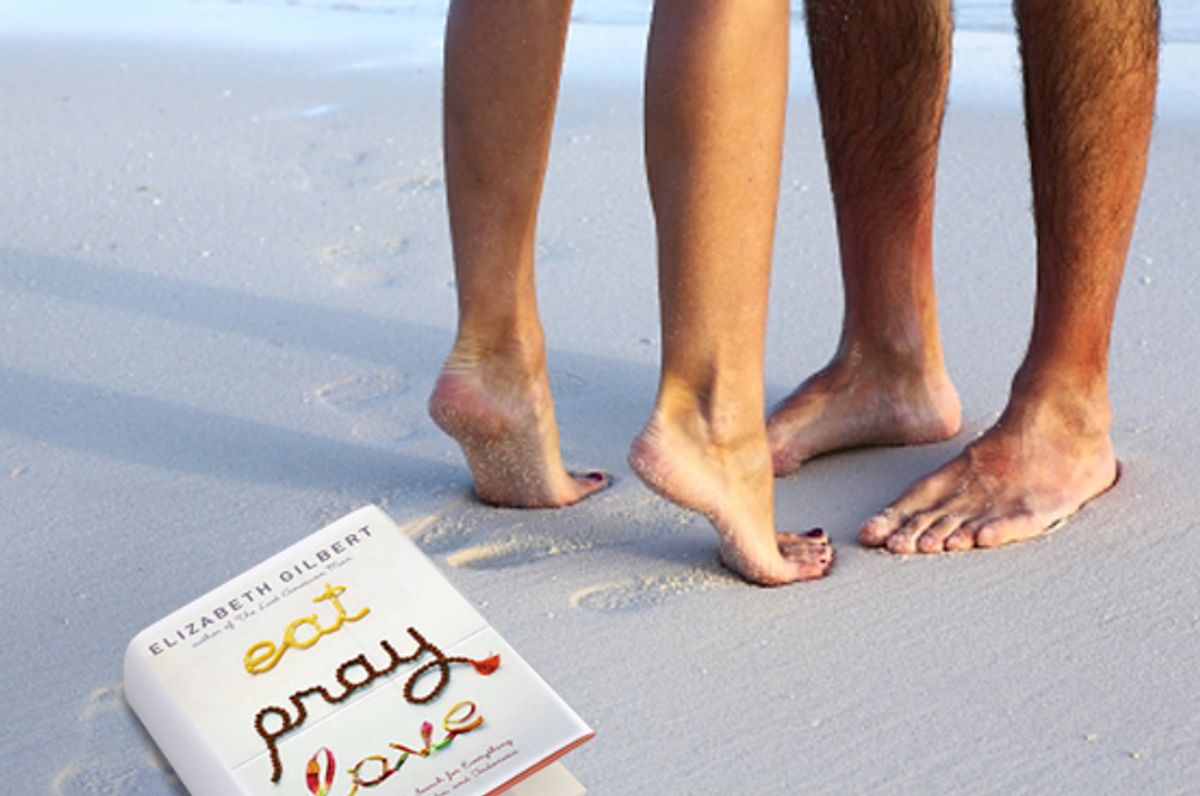 Couple is on the sandy beach
--

I see them in the check-in line at the airport: caftan-wearing women eager to live out "Eat, Pray, Love." As we wait to board the plane to Bali, their mouths are set in thin lines of determination between their wide-brim straw hats and cheerful scarves. Bali's city of Ubud, for those who have not read Elizabeth Gilbert's book (yes, those people still exist), is the temple-and-rice paddy-filled setting for the book's final portion, in which our heroine, having struggled to find peace and acceptance in Italy and India, falls in love with a Portuguese man named Felipe. And women of all ages have followed Gilbert here. I roll my eyes when I see them walking around Ubud in their floaty clothes, ferrying themselves to appointments with spiritual healers while keeping their third eyes wide open for a man to fulfill their latent desires.

We all know "Eat, Pray, Love" has hijacked book clubs worldwide, and will only become more popular with next week's release of the Julia Roberts movie, but less is known of the way it has affected international travel, creating a kind of bourgeois sexual tourism. I feel bad for these women, who seem to think that by following the same steps as one writer, they can somehow graft her happy ending onto their own frustrated lives. My disdain was such that early in my trip, I wrote a story about how they were ruining Bali (the story recently ran on Jezebel).

At 29, I'm not looking for a man. I'm six months out of a nearly two-year relationship so void of passion and emotion that I might as well have been alone the entire time. For the past few months I have enjoyed traveling by myself in Asia, avoiding all offers of romance. One pale Englishman in Laos asked me, his eyes wide and moist, if I wanted to have a bit of fun with him.

"Fun for whom?" I asked and went to bed early that night with my book, happy that I only had to share my room with the large frog on the wall of my bathroom.

Spiritual types like to say that Bali is a great power center of the world and that the island itself is a woman. I am wary of assigning gender to land masses, but the place does feel different than the rest of Asia, almost nurturing, and it's hard not to feel supremely happy when you are paying $15 a night for a ridiculously beautiful hotel with carved teak canopied beds and volcano views. One night on the shared balcony I become fast friends with Susi and Nicole, two independent travelers. In the mornings we share coffee and in the evenings we stay up drinking beer and rice wine, a cloying drink sold cheaply around the island that tastes good mixed with guava juice. We laugh loudly and talk about the things we'd change about the world -- men should be more in touch with their emotions, people should be more tolerant. These are not new ideas, but watching the light sink behind the temples while nearby children practice Balinese music, the ideas feel, at the very least, worth repeating.

One night we go to a local warung, a popular food spot called Dewa's. We sit at a communal table with an extremely tall Dutch guy with disheveled hair named Jorick, whom Susi engages in some intense debate that I am too drunk on local Bintang beer to care about. We all agree to go dancing the next night, but it's raining, and so Jorick stays on our balcony with us, drinking wine and playing music from a tiny iPod speaker. We play question games like college kids, the kind of silly philosophical head-scratchers only enjoyed by those with the luxury of time to burn.

"If you had to choose, what would you give up for the rest of your life? Pasta, bread or rice?" someone asks.

He shows up on the balcony the following evening as well, his lanky frame ducking around the dangling light fixtures. That night, as the bats barrel past after the rains, diving at the insects clustering around our lanterns, we continue our conversations from the night before. I find myself agreeing with Jorick often, and understanding both his accent and his point of view when the others don't. We have moments of prolonged eye contact, but I don't think much of it until we go to the store for more beer. Inside he picks up a basket, and we walk together to the stand-up cooler. "How many do we get?" he asks. I know it sounds crazy, but there is something I love about the way we get those beer bottles together and the way the veins on his arm stand out a bit as he holds the basket. It feels almost carnal, like a prehistoric desire, as if holding a shopping basket were the modern equivalent of being able to club a woolly mammoth. All I know for sure is that as we check out I feel my first shiver of attraction for Jorick.

I could write what happens next, after the wine and beer bottles are all empty, but Gilbert already has done such a lovely and accurate job: "Yes, I did come to his bed with him, in that bedroom with its big open windows looking out over the nighttime and the quiet Balinese rice fields ... It had been a long, austere season of solitude. I had done well for myself ... What I remember most about that night is the billowy white mosquito netting that surrounded us."

Here is my movie montage with Jorick: The impossible beauty of Bali becomes even more vivid, the edges crisper, like a two-week magic mushroom trip. We rent a motorbike and drive around the countryside, dipping into valleys and ascending to views of volcanoes. Children run out from homes built like temples to wave, kites fly above us, always airborne. It is so perfect that it almost frightens me, like stumbling upon a house made of candy in the woods. There has to be a downside to this. We stay in our room so much that the housekeeper tells me later she had no time to clean it.

Do I realize I have become completely, embarrassingly Gilbert-like? No, at this point my blissed-out body has overtaken the judgmental, cynical part of myself. The New York part of me -- the part that sneers at romance and sincere, naked emotion -- has disappeared in favor of an unself-conscious, googly-eyed sap. When Jorick leaves to meet a friend in Vietnam, I have a physical reaction so intense I think I might be pregnant. (I'm not.) Over the next days, I behave like a love-addled teen: listen to Coldplay, gaze meaningfully from the bus at the passing scenery, scribble in my notebook about the beauty of the sky reflected in the water of the rice paddies. Recently I reread "Eat, Pray, Love," and I realized one sentence was almost a direct quote.

It is only when I arrive home that I fully comprehend the irony of the past month: Cynical writer goes to Bali to make fun of Elizabeth Gilbert wannabes only to become perhaps her closest emulator.

I feel stabs of guilt for being so harsh on those women, searching the island for their romantic bliss. Who am I to laugh at their longing? By all means, ladies, come to Bali, I want to tell anyone within smiling distance. Find a wonderful man in a wonderful place. But if I could tell those women one more thing, it would be that maybe they should stop looking so hard. Because if there's a romantic cliché that's held true -- for Elizabeth Gilbert, and now, for me -- it's that bliss usually happens when you aren't hunting it down.

These days, as I plan to go meet Jorick in Europe, my "Eat, Pray, Love" overlap still makes me a bit uneasy, like carrying around a book with an Oprah stamp on it. My spontaneous romance has a whiff of the already discovered, which is both annoying and embarrassing. I can anticipate future conversations with women.

"Bali, in Ubud. I was there alone having some time to ponder my life's purpose and --"

A flicker of recognition spreads over the listener's face. "Wait. Isn't that where --"

"Yes, but it's different," I'll protest, trying not to sound too defensive. "I'm not divorced, and he isn't even Brazilian."

Of course, there's a good chance our relationship, like most, won't work out. Not everyone is as gifted with happy endings as Gilbert, whose marriage to Felipe became the basis of her second tome of self-discovery, "Committed." No, in the end, I'm just Jessica Olien, unknown writer and walking example of the Murphy's Law of Relationships. But, like Jorick says, it would be stupid for us not to see what happens. You never know.

I just don't expect a book deal out of it.

Jessica Olien is a writer living in Brooklyn