This week in crazy: Michaele Salahi 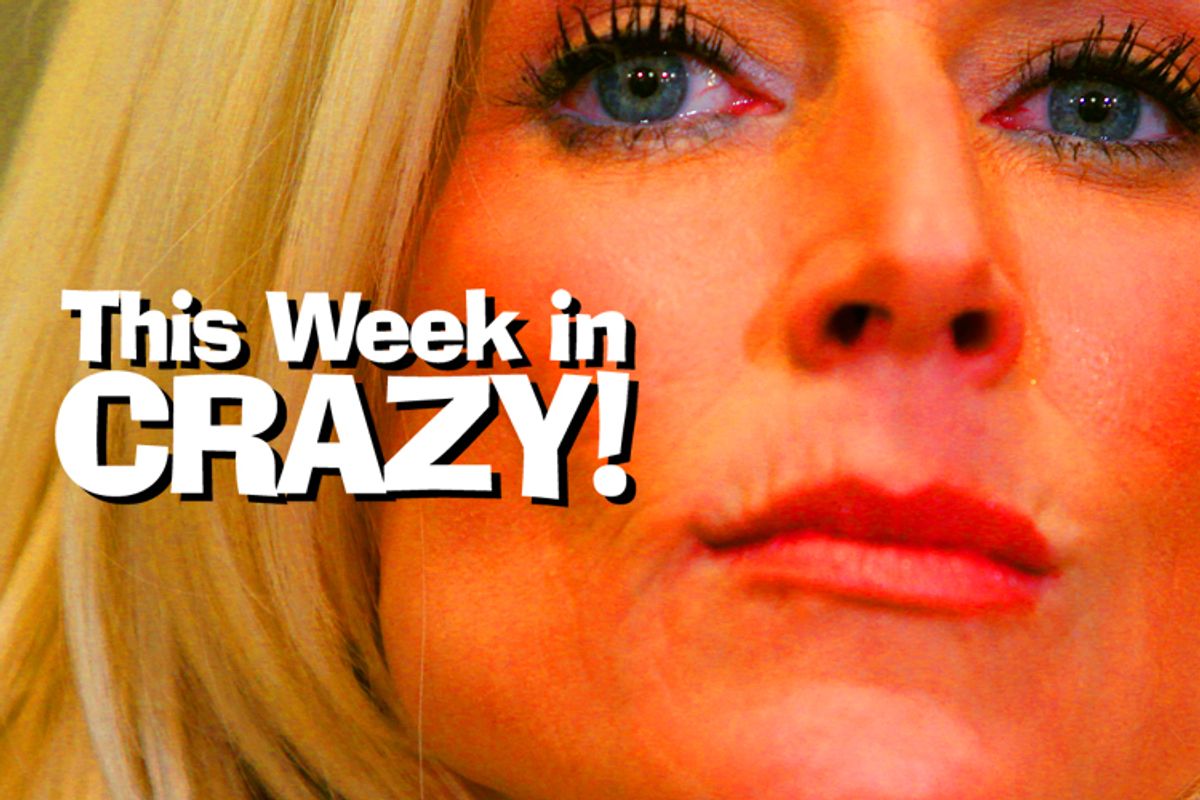 When Bravo's "Real Housewives of D.C." added Michaele Salahi, a woman whose sole claim to fame is crashing -- sorry, allegedly crashing -- a White House party, we knew it wouldn't take long before she distinguished herself as television's newest nutcase.

Sure enough, when Salahi appeared on "The View" this week with the other Housewives, things quickly devolved into a bickering fest -- until Whoopi Goldberg emerged from backstage, nudged her and told her, "Excuse me, could you get back to the White House, please?"

That was motivation enough for Salahi, who promptly decided Whoopi had hit her.

Now, whipping up a catfight might play with the Housewives, but your mouth better not start writing checks to former Week in Crazy winner Goldberg unless your ears are ready to cash them. Backstage, Goldberg, by her own admission, had some "choice words" for Salahi.

The old "She hit me!" gambit, pioneered by little sisters in the back seat on long car trips, is a familiar Salahi ploy -- Washington attorney Cindy Revesman told MSNBC this week that while representing her client in a civil suit against Salahi's husband Tareq, an accidental touch in a confined room spurred Salahi to yell, "Don’t hit me!" and file a complaint. (The charge was quickly dropped, and the case was settled in favor of Revesman's client.)

After the blowup, Salahi, who says Goldberg's "berating" left her in tears, posted on Facebook she would "address on Thursday Morning LIVE on National TV the outrageous abuse and exchange that took place on the ABC Show the View and a [sic] audio & video file from Whoopi Goldberg verbal attack to Michaele. Standby for details …"

Yet instead of addressing the outrageous abuse, Thursday came and went, and Salahi instead opted to delete the post. She did, however, have her lawyer send a testy message that Elisabeth Hasselbeck conveyed on the air, stating she and her husband did not crash the party and have not been charged with any crime. She left out, however, the part about being under grand jury investigation, and how the couple pleaded the Fifth when questioned by Homeland Security.

Despite insisting she was totally supposed to be at that party, Salahi remains nevertheless quite content to capitalize on her reputation as a gatecrasher -- going so far as to tout on her website the "world wide attention" her stunt garnered -- and to include a clip of an "SNL" parody of the incident.

She's also been aggressively hyping "investigative journalist Diane Dimond's Cirque du Salahi" book, which promises to reveal "the shocking true inside story!" while conspicuously not mentioning that the shocking true story is being distributed via Amazon's self-publishing arm, CreateSpace.

Meanwhile Salahi, who co-founded the frequently under investigation business entity America's Polo Cup, has been making herself a standout on her new show, where the 44-year-old refers to herself as a "girl lobbyist."

So who is Michaele Salahi, anyway? While her Bravo bio calls her a D.C. native, she recently told Marie Claire she grew up in Florida. As for her modeling career, she claims to have been "an Absolut Vodka model," which appears to have involved wearing a shirt with an elaborate logo. Most of her life prior to definitely being invited to the White House remains shrouded in mysteries and contradictions. Her 2002 wedding announcement lists her as a graduate of Kings College, though a college spokesman has denied she did. The announcement further describes "a professional model who has appeared in VOGUE Magazine, InStyle, Modern Bride, Town & Country, Harpers Bazaar, Saks Fifth Avenue, BET TV, MTV, Escada, Chanel, Ralph Lauren/Polo and other print & television" -- quite an impressive litany of credentials to somehow have disappeared from her current C.V. And last September, she popped up at a Washington Redskins halftime show honoring its cheerleading alumni -- and wearing a shirt identifying herself as one -- despite never having been on its cheer team. Indeed, she seems to have sprung, fully formed in long blond tresses and red sari, that night in November. As she says on "Real Housewives," "I like to make an entrance." Oh, Michaele, the only woman who could make Whoopi Goldberg look stone cold sane, at least you're telling the truth about something.