Deaths double to 700 a day, as heat wave fills city morgues near to capacity 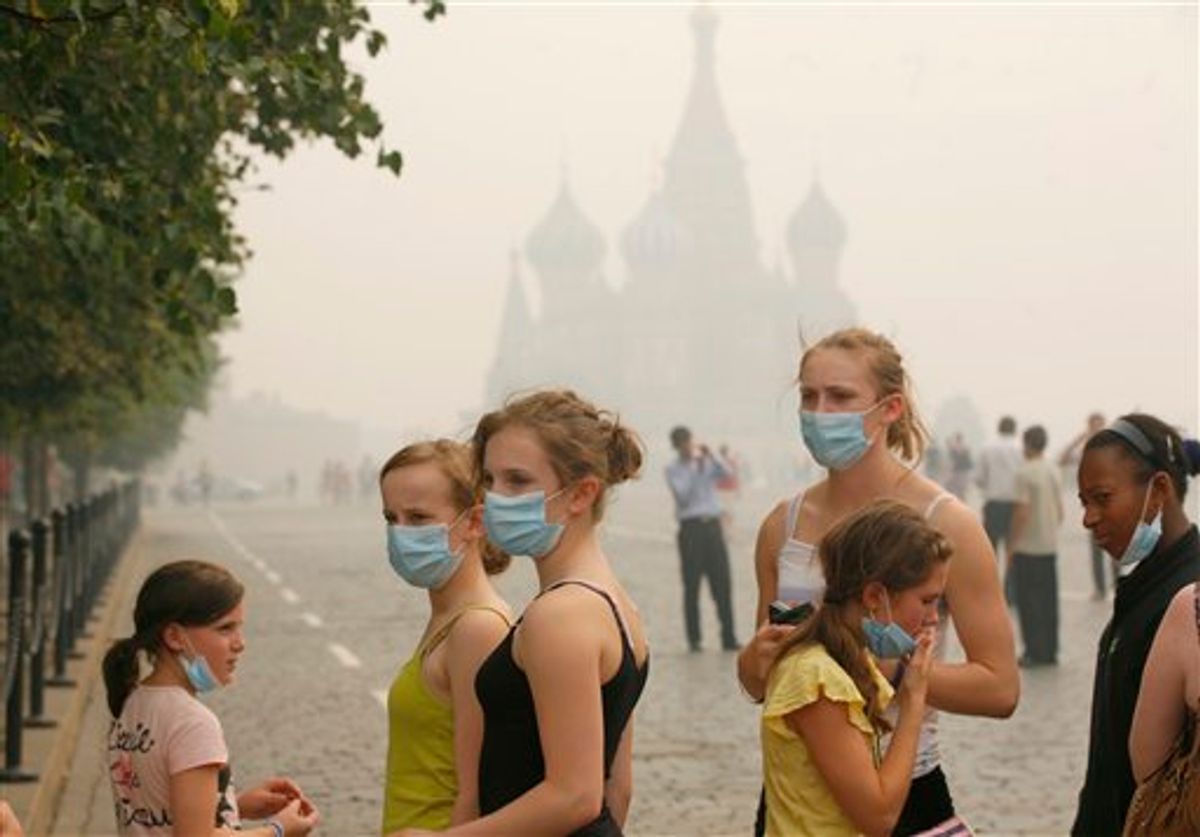 Young American tourists, no name or details given, brave the thick blanket of smog covering Moscow as they visit the Red Square, Sunday, Aug. 8, 2010, with St,Basil's cathedral in the background. A suffocating smog from wildfires hung over the Russian capital, raising the concentration of dangerous pollutants to an unprecedented new high as exasperated residents donned masks and dozens of flights were delayed or diverted at the city's airports. (AP Photo/Pavel Golovkin) (AP)
--

Deaths in Moscow have doubled to an average of 700 people a day as the Russian capital is engulfed by poisonous smog from wildfires and a sweltering heat wave, a top health official said Monday.

Acrid smog blanketed Moscow for a six straight day Monday, with concentrations of carbon monoxide and other poisonous substances two to three times higher than what is considered safe. Those airborne pollutants reached a record over the weekend -- exceeding the safe limit by nearly seven times.

About 550 separate blazes were burning nationwide Monday, mainly across western Russia, including about 40 around Moscow, according to the Emergencies Ministry. Forest and peat bog fires have been triggered by the most intense heat wave in 130 years of record keeping.

Alexander Frolov, head of Russia's weather service, said judging by historic documents, this heat wave could be the worst in up to 1,000 years.

"Our ancestors haven't observed or registered a heat like that within 1,000 years," Frolov said at a news conference. "This phenomenon is absolutely unique."

He said the heat in Moscow reflects the global climate's increased volatility.

Daily highs have reached up to 100 degrees Fahrenheit (38 Celsius), compared to the usual summer average of 75 F (24 C). And, according to the forecast, there will be no respite this week.

Few apartments in Moscow have air conditioning and the city's overcrowded subway is poorly ventilated.

Campbell-Lendrum said it would be difficult to pinpoint whether the majority of new Russian deaths were due to the heat or to the smog, but said there was no question the combined effect was dangerous.

He said elderly people and those with health conditions like heart or lung problems were most at risk, but with extreme conditions, there could also be a spike in deaths of otherwise healthy people. He said the increased deaths would likely continue for as long as the heat wave persists.

At least 52 people have died directly in the wildfires and over 2,000 homes have been destroyed. Flights to Moscow have been delayed and diverted.

Russian authorities have acknowledged that the 10,000 firefighters battling the blazes aren't enough, and sent thousands of army soldiers to help fight the fires.

Wednesday's international soccer match between Russia and Bulgaria was moved from Moscow to St. Petersburg, 370 miles (600 kilometers) to the northwest, due to the smog.

On the Russian blogosphere, one of the country's last outposts of unfettered expression, the mood was bleak and angry that the situation had become so serious. One blogger on the popular LiveJournal site suggested that Prime Minister Vladimir Putin, Moscow's mayor and other top officials be fired for not stopping the fires. Another LiveJournal blogger said the polluting haze had prompted her to quit smoking.

Others focused on immediate issues -- like getting a good night's sleep.

"Every night it's like we prepare for war," blogger Tsirtsis wrote on the independent newspaper Novaya Gazeta's Web site. "With open windows, it's impossible to breathe because of the burning, and with closed windows we choke in the stifling heat."