For GOP, Islamophobia is the new anti-Communism

George W. Bush called Islam "a religion of peace." But his party's base never really believed that 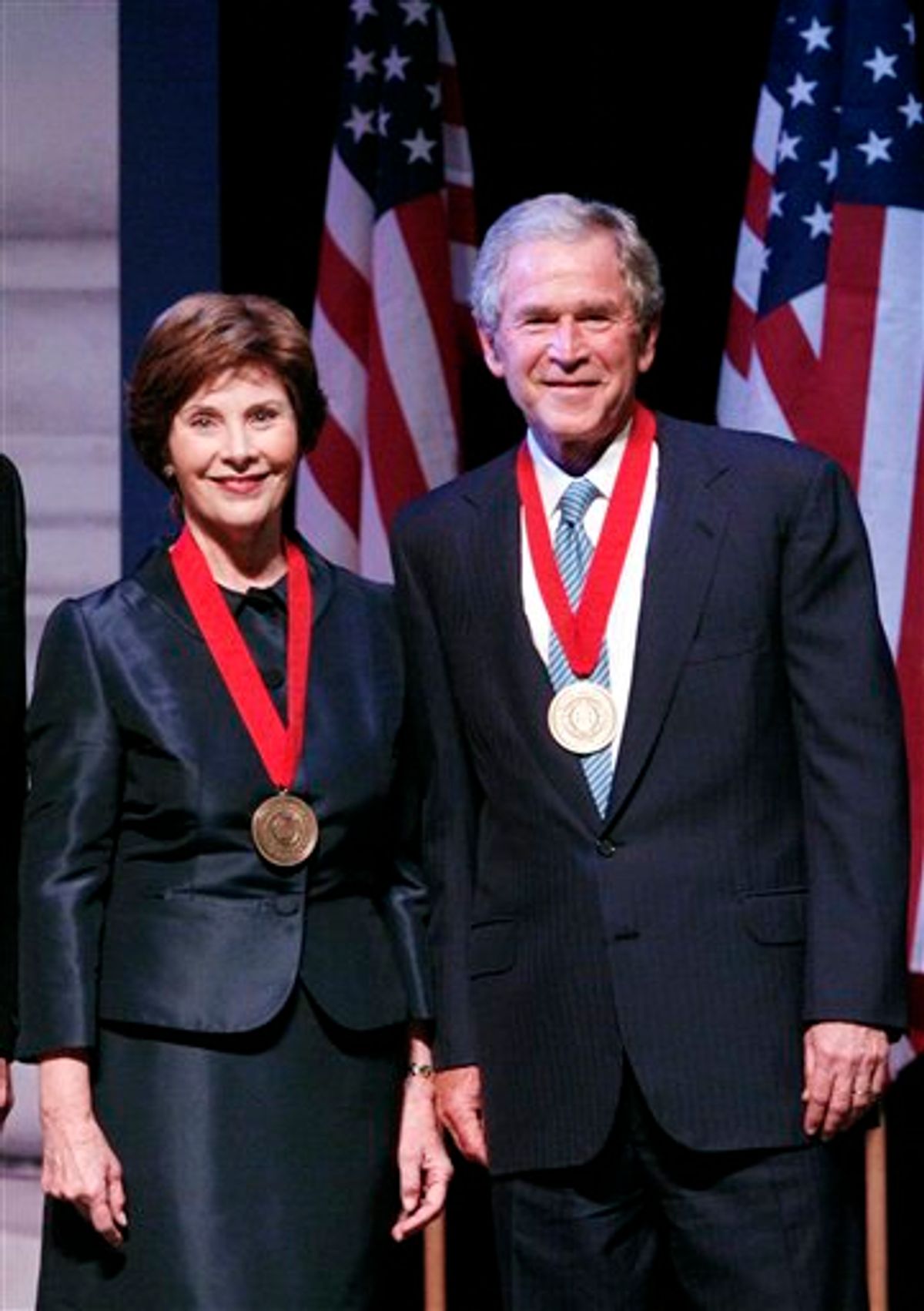 Granted, the praise being offered is narrow in scope, limited only to Bush’s non-inflammatory public comments on Islam in the wake of 9/11, and backhanded in nature, with his example supposedly demonstrating the failure of today’s Republicans -- with their Muslim-baiting response to the "ground zero mosque" -- to meet even a modest standard of responsibility in their own rhetoric.

But the idea behind the praise is big in scope: that, as Matthew Yglesias put it in Sunday’s Washington Post, the post-Bush GOP is engaged in an "abrupt slide toward xenophobia" that the party’s Bush era leadership rejected:

[T]he mosque controversy is not a continuation of the dynamics that started on Sept. 11, 2001, but a sharp reversal of course nine years on, one that's antithetical to the approach during the administration of President George W. Bush. Then, leading conservatives were careful to portray the U.S. response to the terrorist attacks as a targeted campaign against a minority group of murderous fanatics, not a broad cultural conflict with Islam. They appreciated that the latter approach would amount to a strategic and moral disaster.

On the surface, there’s plenty of validity to this. Bush’s insistence after 9/11 that Islam is "a religion of peace" and that those who attacked America represented the faith’s fanatical fringes does indeed have the ring of admirable maturity compared to Newt Gingrich’s cynical conflation of the 9/11 terrorists and the Islamic faith.

But let’s be honest: The difference between Bush’s GOP and Newt’s is one of window dressing only. The Republican Party of the Bush years had the same magnetic allure to Islamophobes as today’s does, even if it didn’t use quite the same inflammatory rhetoric.

It was Bush, after all, who filled his inner circle with committed neoconservatives who believed that Islam itself imperiled Western values and the long-term survival of the United States, and who embraced the neocons’ vision of a "global war on terror." Daniel Pipes, for instance, used a speech one month after 9/11 to warn of the threat posed by "the presence, and increased stature, and affluence, and enfranchisement of American Muslims." Bush appointed Pipes to the board of the U.S. Institute of Peace.

The "war on terror," in turn, cemented for Bush and the GOP the loyalties of America’s most virulent Islamophobes, many of them right-wing Christians who had long yearned for just such a confrontation between the West and Islam. Even as Bush was insisting on his "religion of peace" construction, Pat Robertson was branding Islam “an erroneous religion” and suggesting its adherents were "worse than Hitler," and Jerry Falwell was labeling the prophet Mohammed “a terrorist.”

A cynic would call this a version of good cop/bad cop, with Bush using soothing platitudes to placate moderate swing voters while his right-wing allies energized their flock by articulating the effect of his policies in blunt terms. If that was the idea, it clearly worked, given the importance of conservative Christians to Bush’s narrow 2004 reelection.

Bush’s policies also found vocal support from Islamophobes outside the Christian right. "I have nothing against Islamic people," Dennis Miller told Bill O’Reilly during the Bush years, "but I must say, due to the recent track record, when I'm on a plane and there's a guy anywhere between 20 and 30 who looks vaguely shaky, yes, I'm clocking him for most of the flight." Miller supported and campaigned with Bush in 2004.

That Miller, who supports abortion and gay rights, found common ground with Robertson on Bush’s war on terror illustrates the political power of Islamophobia for the GOP. In many ways, it has become the glue that anti-Communism used to be: a demon that fundamentalist Christians and white ethnic voters from outside the Bible Belt (Reagan Democrats used to be the term for them) can both agree to curse.

This awkward marriage was perfectly illustrated when pro-choice Rudy Giuliani was endorsed for president in 2008 by Robertson. Giuliani, like Bush, had shown admirable maturity in the wake of 9/11, publicly urging New Yorkers not to engage in "group blame." But he was also an unwavering believer in the neoconservative worldview, one who insisted on the campaign trail that all references to terrorism be preceded with the words "radical Islamic." This was enough to win him Robertson's backing.

It is possible that Bush, whose father embodied a pre-1989 brand of Republicanism that valued ties to the Arab and Muslim worlds, genuinely believed that his policies weren’t in conflict with his rhetoric. But even if we give him credit for that, he was still guilty of profound naiveté. By surrounding himself with clash-of-civilizations types and embracing their war, Bush certified the GOP as the party of Islamophobia. And the voters that he won by doing so are the same voters that Gingrich and Sarah Palin and others are courting today with their ugly rhetoric. The only difference, it seems, is that they’re less conflicted about it.