Why bother reading the whole book if you can skip to the end and find out what others thought was most important? 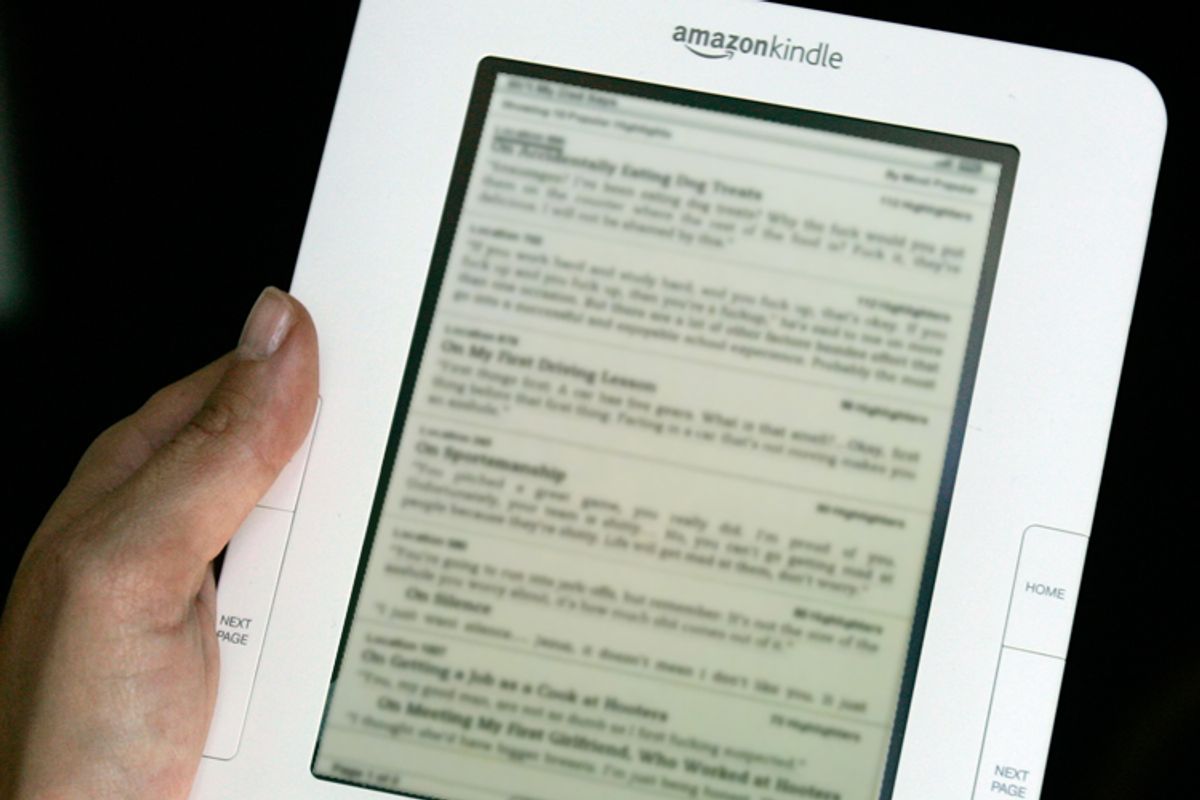 This originally appeared at The Monkey Cage

Recently back in the United States after an extended time abroad, I saw Michael Lewis’ "The Big Short" for the first time in an airport bookstore a couple days ago. Not wanting to add to my luggage -- I apparently missed the fact that Delta has turned into a European discount airline and charges for checking even a single bag now -- I downloaded the book onto my Kindle once I sat down on my plane (which was very fun from a modern technological standpoint) and began to read during my flight. (As a side note, does anyone know whether a Kindle counts as an electronic device you need to turn off while flying?)

A few pages into the book, I was quite surprised to see a highlighted passage of the book, along with a small note with the number of people who had highlighted that passage! Sure enough, the book I downloaded now contains the most popular highlights from other readers of the book. A little poking around discovered two other features: 1) I could turn off this feature (thanks Amazon!); and 2) You could link to a collection of the most popular highlights. Somewhat disturbingly, I did not find either an opt in or an opt for sharing my own highlights.

I’m trying to figure out what to make of this new feature. On the one hand, as a social scientist, I am always curious as to what other people are thinking and doing, so voilà: Now I get to see what my fellow readers think is important in the book I’m reading. In a nutshell, intellectual voyeurism (at least at the aggregate level). Also thinking as a social scientist, my next thought was: DATA. Are we far away from an analysis of whether Glenn Beck readers highlight more passages than Paul Krugman readers? And will Amazon give me this data disaggregated by age, region, or -- dare I dream? -- party affiliation?

On the other hand, the obvious concern is the one I just raised, which is the issue of privacy. Now not only does Amazon know what books I downloaded, they also know what passages of those books I find most interesting. I can see it now: "We see you highlighted 'economic voting in Eastern Europe,' perhaps you would be interested in "Regional Economic Voting" (available for purchase here, also available for the Kindle!)."

But I have to say, it was the collection of social highlights at the end that most troubled me as a professor. I mean, why bother reading the book if you can just skip to the end and figure out what everyone else thought were the most important parts? I remember taking books out of the library when I was in college (for today’s undergraduates, the library is that big building where they keep books) and finding out that someone else had scribbled notes in the margin previously; you could get the same effect by buying used books. There was always the temptation to just skim the book by reading what the previous person had highlighted, especially in the more tedious sections. I always thought one of the nice side benefits of moving to electronic versions of books and articles was the removal of this temptation; when the work is in electronic format, everyone gets a clean copy. But alas, no more; now it is worse. You not only get what a couple people have scribbled in the margins, you can get what everyone (collectively, at least) has decided is important! Again, another excuse not to actually read.

As an author, though, the opportunity for feedback is kind of enticing; I do write for a blog, after all. It would be interesting to be able to watch on your electronic copy of your own book what it is that readers are highlighting. I imagine as this technology improves, we might also get the opportunity to see what notes people are putting in the margins, and ultimately, perhaps, even be able to answer them with our own comments. In this world, books would start to look a little more like blogs. Not sure if that’s a good thing or a bad thing, but it would be pretty wild to scribble some question down in the margins in your Kindle or the like, only to come back an hour later and find that the author had answered it. On the downside, would anyone ever want to write a statistics textbook ever again in that sort of a world?