Boehner trashes aid bill as "a bailout to teachers unions" but backs tax cuts for the rich. Plus: Gibbs or Cheney? 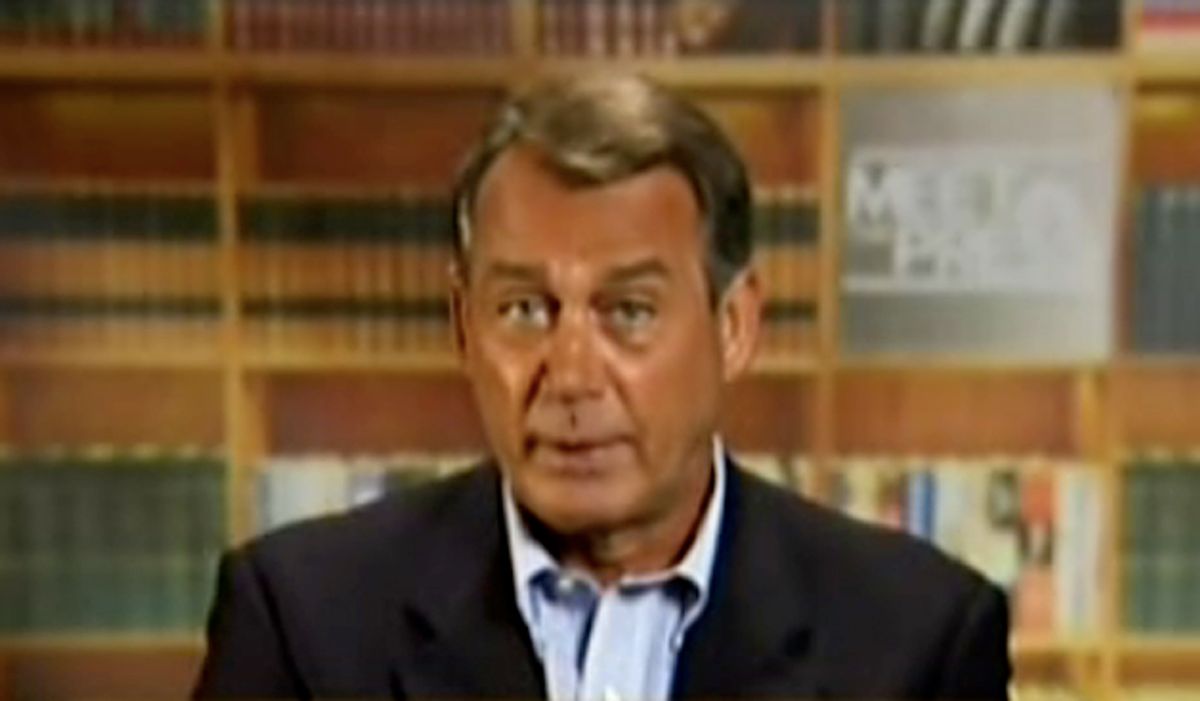 It's been a rough week for House Minority Leader John Boehner. On Tuesday he denounced the $26 billion state-aid bill, to stop the layoffs of teachers and other public employees, saving 300,000 jobs, as "irresponsible" and a "bailout to the teachers unions." (Remember? Frank Luntz told the boys that the public hates "bailouts.") "We are broke!" Boehner declared. But only two days earlier, Leader Boehner told David Gregory on "Meet the Press" that we have to extend the Bush tax breaks for the wealthy, which would seem irresponsible if we're really broke.

GREGORY: [H]ow can you be for cutting the deficit and also cutting taxes, as well, when they're not paid for?

BOEHNER: Listen, you can't raise taxes in the middle of a weak economy without risking the double-dip in this recession. President Obama's favorite Republican economist, Mark Zandi, came out several weeks ago and made it clear that raising taxes at this point in, in the economy is a very bad idea.

GREGORY: But do you agree that tax cuts cannot be paid for...

BOEHNER: You cannot balance the budget without a...

GREGORY: But tax cuts are not paid for, is that correct?

BOEHNER: I am not for raising taxes on the American people in a soft economy.

GREGORY: That's not the question, Leader Boehner. The question...

BOEHNER: And the people that the president wants to tax ...

BOEHNER: Listen, what you're trying to do is get into this Washington game and their funny accounting over there. You cannot get the economy going again by raising taxes on those people who we expect to create jobs in America and to get the economy going again. If we want to solve the budget problem, we've got to have a healthy economy and we have to get our arms around the runaway spending that's going on in Washington, D.C.

Funny accounting? I came across an example of very funny accounting in the anti-Boehner ad being run by Blue America and Americans for America PACs. You can watch it, below. The ad mocks Boehner's passion for golf with a spoof on the MasterCard commercials:

Raising the retirement age to 70 and voting to end unemployment benefits: Priceless.

For those who want an out-of-touch pro golfer for a congressman, there's John Boehner. For everyone else, there's Justin Coussoule.

Blue America is also responsible for a billboard in Boehner's district that asks, "When was the last time you golfed 119 times in one year?" Boehner's office is denying the 119 figure, but if you don't trust Blue America, how about Golf Digest? In 2005 the magazine reported that Boehner himself boasted of playing about 100 rounds of golf a year -- mostly with lobbyists. Boehner bragged that he pays attention to his lobbyist-golf buddies: "If someone I’ve gotten to know on the golf course comes into my office with a good argument, I tend to want to listen.”

By the way, it was nice to see President Obama hit back at Boehner and the GOP for calling the aid package a "special interest" bill. Obama countered, "I suppose if America’s children and the safety of our communities are your special interests, then it is a special interest bill." It's great to see the president calling out his real enemies. Maybe he can get the message to Robert Gibbs, who bashed the "professional left" in words that came from the Dick Cheney playbook: "They will be satisfied when we have Canadian healthcare and we’ve eliminated the Pentagon." Way to red-bait your base as socialists who hate the military!  This White House better wake up to the need to respect its progressive base, and Gibbs' efforts to "walk back" his insults didn't do it: "Yesterday I watched as someone called legislation to prevent teacher layoffs a bailout -- but I know that's not a view held by many, nor were the views I was frustrated about," he told Sam Stein.

I've never seen anyone on the left call the aid bill a "bailout." John Boehner did. And progressives -- maybe even some Gibbs considers the "professional left" -- are working to defeat him in the House. Watch the ad. It'll make you feel better. Maybe.