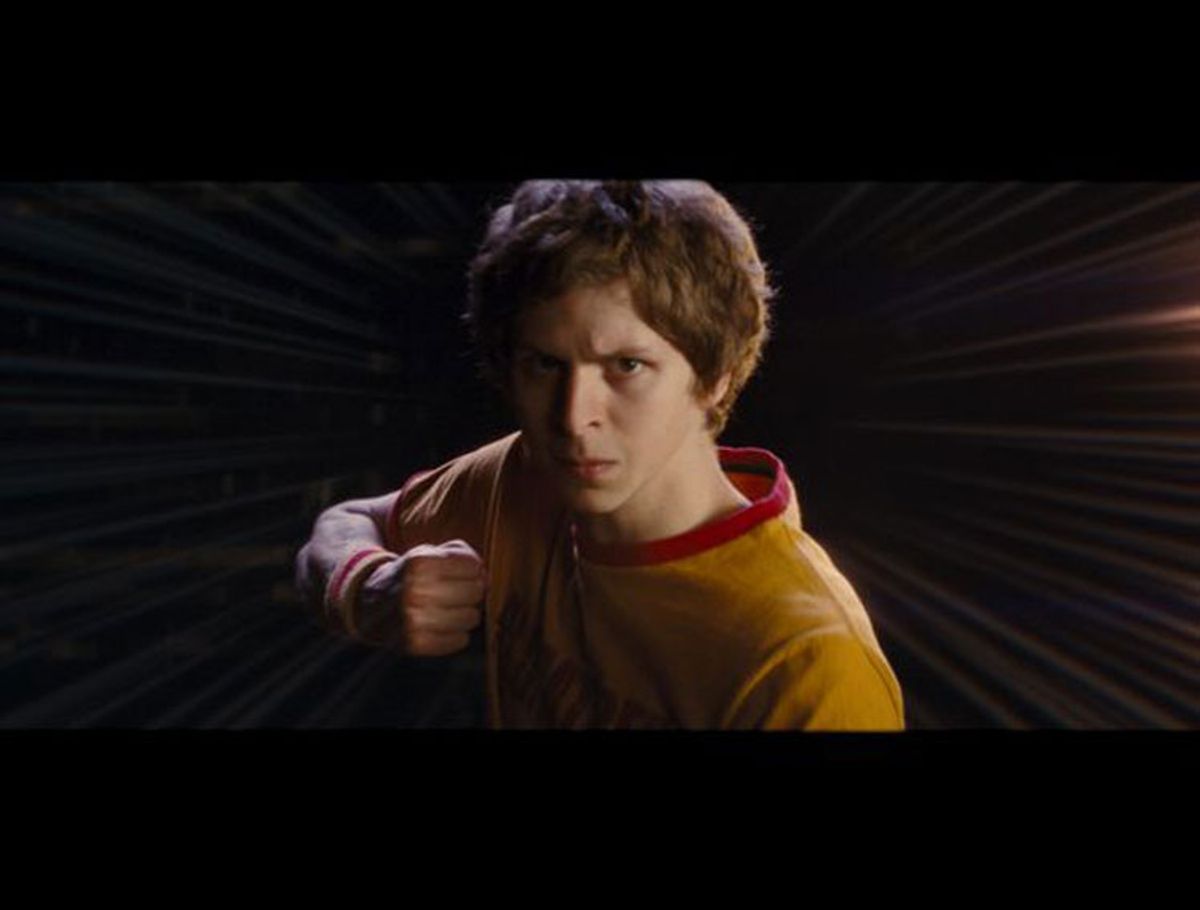 Michael Cera in "Scott Pilgrim vs. the World"
--

If indie-culture cuteness is a transmissible disease, you might want to attend "Scott Pilgrim vs. the World" wearing a latex bodysuit. Otherwise you could find yourself wandering the streets after seeing the movie, with your hair changing color every few seconds, early-'90s-style video-game graphics hanging over your head and adorable little words drifting around you in the air, signifying sound effects. SQUISH SQUOSH SQUISH, go your shoes on the pavement. RIIINNNGG! Wait -- did that word float out of your pocket or mine?

This film adaptation of Bryan Lee O'Malley's manga-influenced, teen-oriented series of graphic novels takes place in an odd and charming fantasy world that isn't quite either the present or the past. This can partly be explained by the fact that it's set in Canada. But perhaps not entirely! (Save those pissed-off e-mails, Canadian readers. You know we love you, right? We'll even let you have your own "Real Housewives" series -- if we can have your healthcare system.)

British writer-director Edgar Wright (of "Shaun of the Dead" and "Hot Fuzz") translates the winsome quirk of O'Malley's comics to the big screen with lovable, maddening, self-conscious mop-top Michael Cera (of "Superbad" and "Juno") in the title role and a seemingly endless series of high-style gimmicks and widgets. Scenes collide, zoom into each other and overlap; a character begins a sentence in one place and ends it in another. (There are some neato editing tricks in this movie I haven't seen before.)

During the fight scenes, when slacker Toronto musician Scott Pilgrim must battle his hot new Yank girlfriend's seven evil exes -- he always says "evil ex-boyfriends"; she always corrects him; he still doesn't get it -- the film becomes a Donkey Kong-era video game, complete with defeated characters who disintegrate into showers of points and little midair icons: 3,000 points over here, an extra life over there. In Scott's domestic scenes with his gay roommate, Wallace (Kieran Culkin), the movie becomes an American "couch sitcom" of about the same vintage, with a laugh track and pseudo-humorous cue music. Scott and Wallace share a bed, by the way, often along with Wallace's various paramours, but it isn't that kind of thing. Honest!

So "Scott Pilgrim" is a video game and a sitcom and a half-loving, half-mocking portrait of Toronto indie-rock culture at some undefined point in the not too distant past. At moments it also seems to channel the campy Adam West "Batman" TV series of the '60s, what with the on-screen sound-effect words and the array of vain and ludicrous villains. But then, that show is like the "Huckleberry Finn" of contemporary pop culture -- we are all Batman's children -- so perhaps that goes without saying.

Scott plays bass in a Toronto emocore-type band called the Sex Bob-ombs, whose lead singer is named Stephen Stills (Mark Webber). I guess that'd be Canadian rock-history humor; there's also a supporting character called Young Neil. As Scott announces at the beginning of a crucial Battle of the Bands gig: "We're the Sex Bob-ombs and we're here to make you think about death and feel sad and stuff!" (There's a lot of that kind of affectless, cackle-inducing dialogue: "Watch out! It's that one guy!") He is scrawny and wears T-shirts with inscrutable indie-dude graphics on them and hasn't cut his hair since being dumped by Envy Adams (Brie Larson), femme fatale lead singer of a now-huge band called the Clash at Demonhead. (I know it's been a long time and all, but it's totally not OK to have some sucky Canadian band use the word "clash" in their name.)

First of the evil exes, for instance, is Matthew Patel (Satya Bhabha), an Indian kid Ramona made out with in grade school. He shows up with some awesome kung fu movies and a Bollywood-esque production number featuring a chorus of Demon Hipster Chicks. "Why do I have to fight this guy?" Scott protests. Matthew, somewhat deflated: "Didn't you get my e-mail explaining the situation?"

That's kind of how it goes in "Scott Pilgrim vs. the World." Amid all the rapidly shifting scenarios, the choreographed cartoon-fight sequences (which feature nary a bruise or a torn pair of Levis, never mind any blood) and the machine-gun onslaught of sight gags and snappy dialogue (Wright co-wrote the screenplay with Michael Bacall), the movie tries so damn hard not to bore us that the giddy, relentless pace itself becomes wearing. Some of the jokes are gleefully hilarious -- I won't spoil the arrival of the Vegan Police, sent to punish professed vegans who violate their code -- and those that fall flat are quickly forgotten in the rapid churn.

Most movies cranked out by the major studios are so formally listless, and involve such minor tweaks on hackneyed formula, that it seems churlish to complain about a picture that falls out of the boat in the other direction. "Scott Pilgrim vs. the World" is highly entertaining, from minute to minute, and its semi-mythical portrayal of Torontonian life is entirely charming. If you can stand massive doses of cute and clever, it's a fine use for your summer-movie dollar (whether or not that dollar has a funny old lady on it).

But "Scott Pilgrim" is also one of those movies where watching the fast-paced and hysterical trailer might be superior on several levels to sitting through the entire damn film. Scott and Wallace and Knives and Ramona and the rest of the people in it are more like gestures or ideas or comic types in a self-ironizing fast-food commercial than like old-fashioned movie characters. I never felt remotely interested or invested in what was going to happen to them, and it would be violating the geeky, hipster coolth of the film to care that much. After all, when the story around them isn't a video game, it's a post-teen romantic comedy, which is (if this is possible) an even more pointless and predictable form.