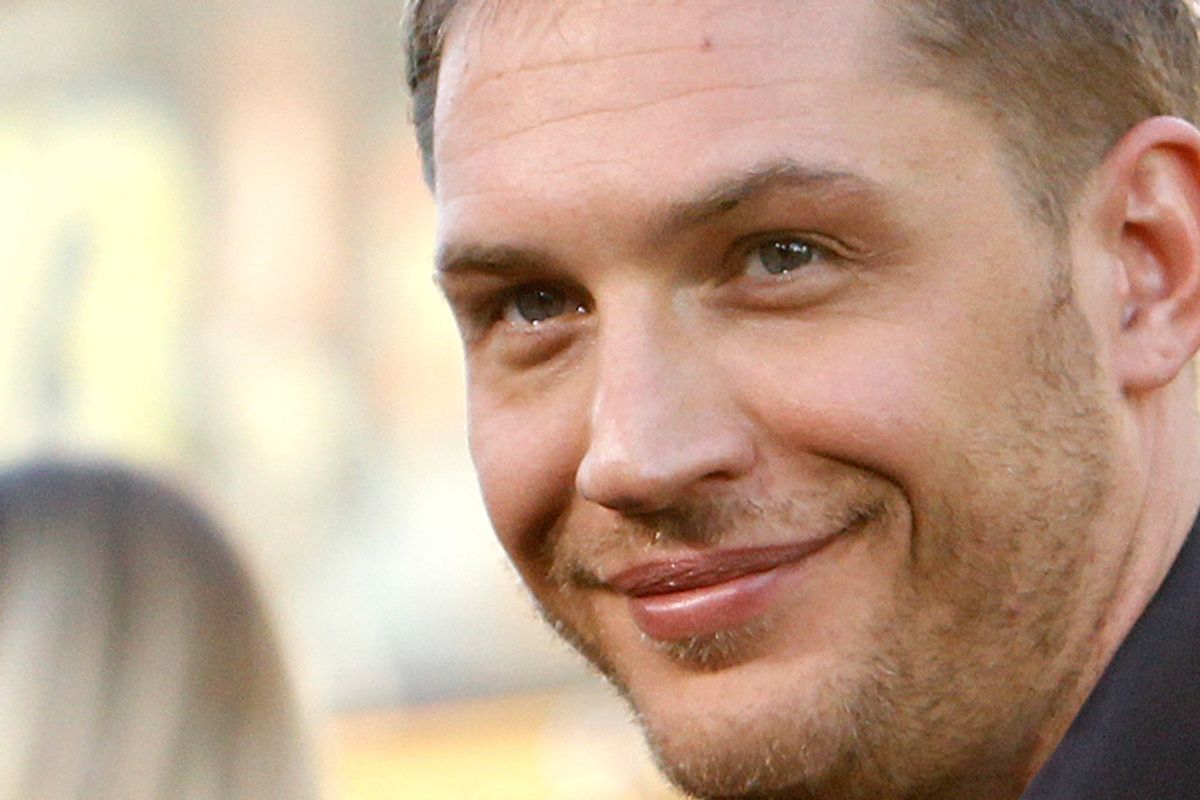 Tom Hardy has a two-year-old daughter by an ex-girlfriend. He's engaged to marry his "Wuthering Heights" costar Charlotte Riley. And when asked if he'd ever had sex with men, the "Inception" star will cheerfully, unabashedly say, "As a boy? Of course I have. I'm an actor for fuck's sake. I've played with everything and everyone." Ladies and gentleman, a new kind of star is born.

Coming from a hot female starlet, a seemingly effortless admission of same-sex dabbling wouldn't just be par for the course, it'd practically be a ticket to the cover of Maxim. Fergie says she's had "a lot of fun" with women. Megan Fox talks about her crushes on strippers. Lady Gaga writes "Poker Face" about her Sapphic experiences,  and dating Samantha Ronson becomes the most interesting Lindsay Lohan has done in the last five years. Ooh, tell us again about that time you were in bed with a girl, ladies. Don't leave out any details. Are there pictures?

But for a dude to be even suspected of taking a walk on the wild side has traditionally been a potential career-killer. What are blind items for, if not to chronicle the alleged homosexual dalliances of our heartthrobs? For prominent men to admit having had -- and thoroughly enjoyed -- gay experiences is something we've rarely seen since the height of glam rock. Yet Hardy – who played a gay mobster in "RocknRolla" – is discovering that frankness hasn't damned him to an immediate punt from the hot-young-thing list. In fact, his star has risen exponentially since a revealing 2008 interview in the gay magazine Attitude was picked up late last month in the UK Daily Mail. The appreciative delight with which the revelation has been met may perhaps best be summed up by the online commenter who cheered, in classic British fashion, "Phwoooooaaaaarrrrrrrrrrr."

Was his admission a calculated PR strategy from an up-and-coming actor talking to the gay press, a way of staving off tawdry rumors before they wound up on the cover of The Star? Was it a hasty remark from a less-than-media-savvy performer who hadn't yet caught his big break? Does it matter? Because despite making it clear he's "done experimenting," and that "the gay sex bit does nothing for me," Hardy's admission that "There's plenty of stuff in a relationship with another man, especially gay men, that I need in my life" was a winning change from typical Hollywood hyper masculine, let's-throw-a-homo-joke-in-every-ten-minutes celebrity culture. Entertainment Weekly has dubbed him "the LeBron James of sexualilty – everybody wants him" and yes indeedy they do.

Though Hardy has yet to follow up his prior comments with any new ruminations on sexuality, the enthusiasm with which his revelations have been accepted reflects a seismic shift in stardom's double standard. Was it just two years ago that Katy Perry could score with "I Kissed a Girl" while musically taunting her ex that "Ur So Gay"?

There are undeniably still plenty of male performers unwilling to open up about anything in their sexual history that doesn't have boobs, but it's refreshing to greet a new breed of actor who doesn't need to play that game. Behold, for further example, the fascinating trajectory of James Franco, who bounces between gay and straight roles -- with digressions for penis-themed performance art and directing the homoerotic  "Feast of Stephen" -- and keeps winning hearts on all sides of the gender line.

The seemingly sexually fluid guy isn't a new creation, and there's good reason to be skeptical of rising stars trying woo the gay audience while enjoying all the female tail that comes from being straight-identified. Furthermore, Hardy's assertion that "A lot of gay men get my thing for shoes" does have the faint whiff of trying to be accepted by a club one does not actually belong to. I don't have the full list of bylaws in front of me, but if you want to be gay, I'm pretty sure you've got to do more than like shoes.

Yet the mere fact that Hardy's comments about his erotic past have been met kudos for his candor (instead of shocked gasps) says something positive about today's changing standards . And maybe acknowledging that what we've long assumed, nay, encouraged in women – that sexual orientation is not always an immutable state of being, that one can orient one way and still feel curiosity, desire, attraction in another – can apply to men as well goes a long way toward destigmatizing the fairly commonplace experience of male bisexual experimentation. Acting is for the movies. But as Hardy's sudden, encouraging rise shows, offscreen, it's honesty that's hot.