Andrew Morton's "Angelina": The worst book of the decade 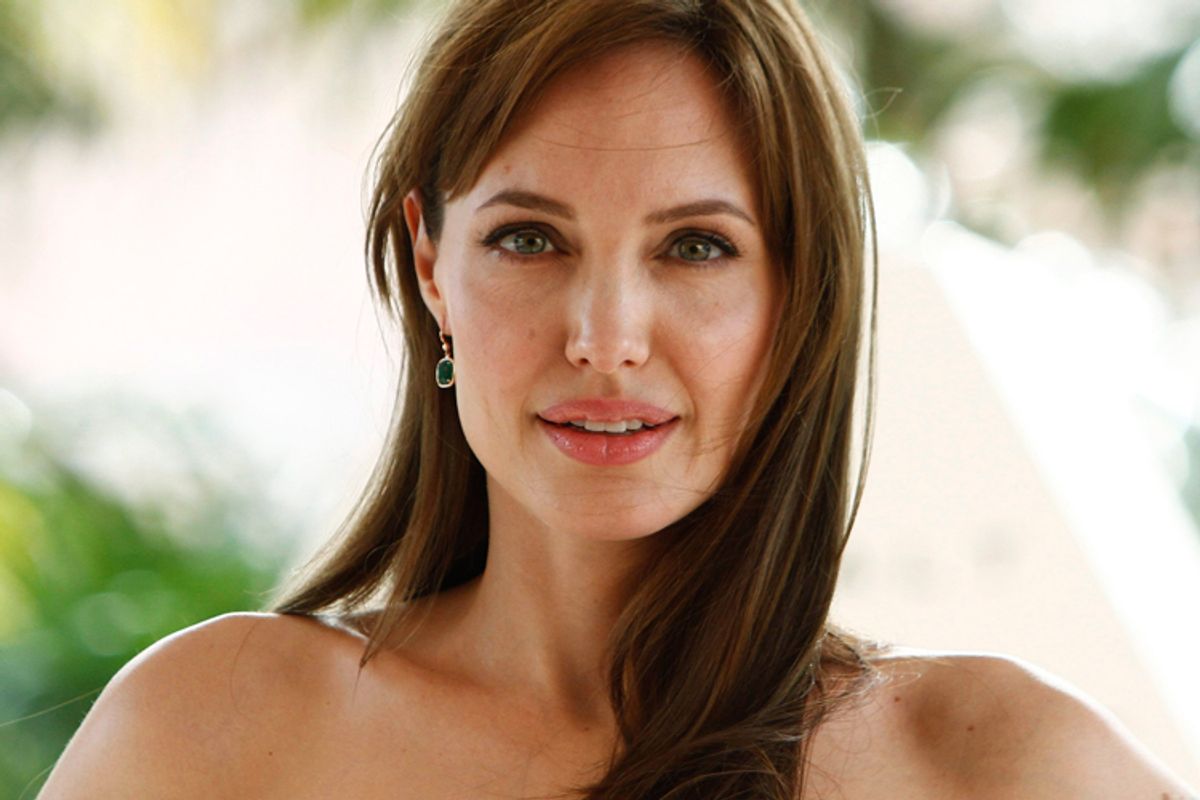 I know you're not supposed to judge a book by its cover, but it's hard to understand what the people who put together "Angelina" were thinking. I mean, if you want to sell a book on Angelina Jolie, wouldn't you put a nice color photo of her face on the front? Instead we get a shot of her neck and back (which, to be honest, aren't all that unattractive) revealing a couple of her tattoos.

What exactly is the point? Is the author, Andrew Morton, trying to tell us that he is approaching the phenomenon of Jolie from a different perspective? If so, he is deluding himself and trying to delude us. The cover of Angelina makes it appear to be a novel, and on closer inspection, that's what it proves to be: a fictional account of an actual life.

Morton, his dust jacket informs us, wrote a "groundbreaking 1992 biography" of Princess Diana as well as books on Monica Lewinsky and Tom Cruise; I haven't read any of them, but judging from "Angelina," he has written more biographies than he's read. In his acknowledgments, Morton writes, "For the most part, I have relied on original research and interviews with contemporaries, or at the very least tried to place Angelina Jolie's own words in a coherent framework." The last part shouldn't be all that difficult since Jolie has been about the most accessible celebrity in the world over the last 10 years and is usually a great deal more coherent on her life than Morton is.

Regarding Morton's "original research," this Jolie junkie found practically nothing that I hadn't seen before and mostly dismissed as utter crap. Much of Morton's research seems to have been done while standing in supermarket lines, and as for the rest, he plays a clever shell game with his evidence. His sources include "a friend" (the phrase used at least 12 times), "an unnamed friend" (at least 5 times, and there is no explanation as to the difference between a friend and an unnamed friend), "an unnamed friend [who] told the magazine," "a friend at that time," "a mutual friend" (twice), "a mutual friend, a writer." Morton must define the word "friend" as someone who dislikes Angelina enough to say something nasty about her but doesn't want her to know who said it.

There are also "a well-informed source" (twice), "a girlfriend who knew Angie well at this time," "the maid," "the hotel worker," "a psychologist who has met with Jennifer socially," "a member of Brad Pitt and Jennifer Aniston's circle," and "a psychologist who mingled in the Brad, Angie and Jennifer circle." Oh, and my own personal favorite: "One former White House veteran."

Stop me if you've heard these before, and if you flip through the National Enquirer, Us Weekly and Star magazine, as I have, you have heard them before. If you're a Jolie aficionado, you already know just about everything that's in this book: Angelina's father, Jon Voight, deserted the family or was kicked out when Angelina and her brother, James, were little, Angelina was a tomboy, as a child she always liked to take dares, she has always loved knives, as a young girl she practiced self-mutilation, she had at least one sexual relationship with a woman (Calvin Klein model Jenny Shimizu), she's had bouts of depression and flings with drugs. (I did learn one thing that I hadn't picked up in the tabloids, that Al Pacino was the unrequited love of her mother, Marcheline Bertrand.)

We know these things are true because Jolie has freely talked about them so often. That's not enough for Morton; he must drag in all kinds of outside witnesses to lend credibility to his own theses. A friend of Marcheline, Lauren Taines, thinks "a lot of Angelina's dabbling with other women was to take a stab at her father." As if getting revenge on her father is the only reason why a woman would ever have sex with another woman.

Morton calls in a swarm of experts to testify on Angelina's behavior, their comments ranging from psychobabble to the banal. Psychologist Iris Martin tells us, "If you have an attraction to a woman, it is going to end up sexual." Well, that certainly jibes with my own experience. According to another psychologist, Dr. Franziska De George, "Bisexuality is part of being lost; it is a way of expressing yourself." I thought all sexuality was a way of expressing yourself. Dr. De George also says, "The ultimate disassociation is suicide." Ya think?

Someone from Morton's stable of professional busybodies is always available to weigh in on just about any aspect of Jolie's life. De George thinks that "for Angelina to adopt a child from another country is symbolic of how alien she feels." Might it also be symbolic of her love for children? When analysts can't be found, higher powers are called on, including Princess Diana's former astrologer, Penny Thornton, "who has carefully studied Angie's birth chart."

When not calling in a shrink, Morton is making his own pompous assessments. "The key to understanding this issue," he writes of Angelina's infancy, "is the fact that babies are born without the capacity to differentiate or articulate their feelings and needs. They are in what is termed 'a global undifferentiated state,' their emotions, if not met, lurching from anxiety to panic and finally disassociation." Sifting through this rubble of jargon, I think it can be simplified as: Babies need love and can't say that because they're babies.

What really grates, though, is Morton's unrelenting didacticism. He is absolutely convinced that Angelina Jolie has lived her life the wrong way and that he knows a better one: "She is still paying a price in currency that she barely understands," but which, of course, Morton does. He writes to argue that Jolie's mother, who died of cancer in 2007, should have forgiven Jon Voight for deserting the family -- and that Angelina should have done the same. He doesn't seem to understand that in his own book, Voight comes across as a loony bird.

Voight, who listed Gandhi, Martin Luther King and Bobby Kennedy among his early spiritual guides, later "began to explore Judaism more closely ... even considering converting to Judaism." He took to calling friends in the early hours of the morning and reading them passages from the Bible; over the last couple of years he has publicly ranted against "Obama oppression." At a Paramount Pictures ceremony a couple of years back, he spotted Angelina and began crying her name out loud: "Voight planned to speak with his daughter about her life style, her exhibitionism, and her erratic behavior." Who, I wonder, should speak to Voight about his own? Morton mocks the "Saint Marcheline image" of Jolie's late mother while excoriating Angelina for shunning her father without even suggesting that it might be dangerous to have someone so unstable around her children.

"Angelina" is one long rant against just about everything Jolie has ever done or been said to have done. Her second husband, Billy Bob Thornton, "a homebody who lives for his music and art had gotten himself into a freak show where he was Exhibit A." That homebody had been married three times before Jolie and walked out on Laura Dern after proposing marriage. Morton apparently does not trust Billy Bob's own evaluation of the subject: "I was frightened of Angie because she was too good for me. She was too beautiful, too smart, and had too much integrity. I felt small next to her and just couldn't live with it."

Morton can't live with it, either. One of the book's more bizarre running themes is Angelina's cruelty to ... Mick Jagger? Mick lusted after and pursued Angelina for more than two years and "paid a high emotional price, falling into a deep depression as a result of Angie's silence ... He was completely heartbroken by her." And, "Much to Jagger's chagrin [Angelina] did not hang out with him backstage." And "Jagger felt he was on the outside looking into Angie's life." Well, get in line, pal. "I feel," he quotes Mick as saying, "like I am just a piece of luggage at an airport carousel, waiting to be picked up." Morton actually wants sympathy for the devil.

As the object of desire for every man and most women she encounters, Angelina cannot win: If she fucks someone, in Morton's eyes she's a slut; if she doesn't, she's a tease. "She kept her stable of men in different compartments," Morton writes, "never letting on that each was an interchangeable part of her posse."  Lucky them, I say. "A friend," unnamed, says, "She might have said that she's slept with only four men [after her marriage to Thornton], but she is a total sexual deviant." You can almost hear Morton tsk-tsking over your shoulder in the first half of that sentence, and licking his lips in the second.

Morton combines the soul of a pimp with the morals of a TV evangelist. Near the end of his book he tries desperately to set up a tryst between Angelina and Johnny Depp, her costar in  "The Tourist," currently in postproduction. Certainly, he writes, "an affair would be box-office poison for Angie" -- though terrific for paperback book sales of a biography, I bet. The only sour note is, "Astrologically, though, there is little connection between Depp's and Jolie's charts ..."

Morton is incapable of evaluating Angelina Jolie as an actress, except to refer to the occasional critic, including Pauline Kael, who after watching her Oscar-winning performance in "Girl, Interrupted," commented, "She's absolutely fearless in front of a camera. This girl would scare the crap out of Jack Nicholson in 'Cuckoo's Nest' ['One Flew Over the Cuckoo's Nest']." (In the interest of full disclosure, he took that quote from a piece I wrote on Jolie for Salon in 2005.)

"Angelina" couldn't really be called, in the words of a friend of mine (an unnamed friend, a mutual friend, a writer, a psychologist who has mingled in the Brad, Angie and Jennifer circle), "a journalistic disgrace," because this is not journalism. The real disgrace is that this book is printed by a major publisher and is being referred to by some of the media as if it has some legitimacy. It's too early to call "Angelina" the worst book of 2010. I can, however, call it, with some assurance, the worst book in the 21st century so far.