Portia de Rossi wants to adopt wife Ellen DeGeneres' last name. Is it retro, refreshing or something else entirely? 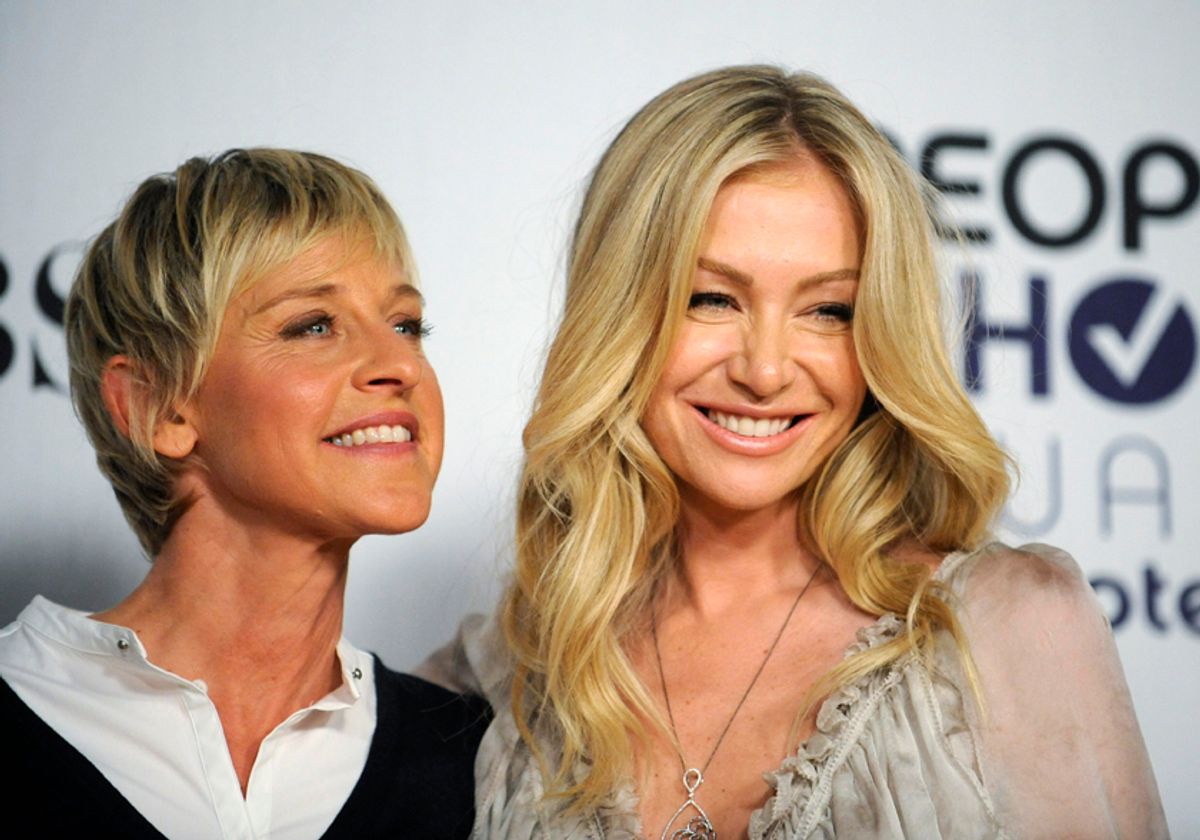 What's the next step after a same-sex marriage? A same-sex name change -- at least, that's the case for Portia de Rossi, who has petitioned to adopt wife Ellen DeGeneres' last name. To gay couples everywhere: Welcome to the surname wars!

Even though same-sex marriage seems to topple nasty patriarchal tradition, it's easy enough to see Portia's name-change as a slightly retro- or hetero-minded move. Popular opinion is that even in same-sex relationships one partner often plays the part of the "man" and the other the part of the "woman," and slacks- and sneakers-loving Ellen and long-locked Portia don't exactly dispel this idea. But it isn't necessarily so simple as feminine deference, just as it isn't always so simple in straight relationships when a woman takes on her husband's name.

In a piece for Salon many years back, Lynn Harris wrote: "Taking your husband's surname, traditionally, makes you an auxiliary, an adjunct, the cute female sidekick, a spinoff, a derivative, Mrs. Him. But for some women now, it's an assumption, rather than a loss, of power -- shared power." (Not to mention: "Most empowering for some women is the very freedom to choose a husband's name over what is -- nota bene -- their dad's.") It's also a practical choice for women who aren't fond of their maiden name. I've come across plenty of couples for whom it's simply the better-sounding last name that "wins." In Portia's case, she's actually asking to reinstate part of her birth name. She was born Amanda Lee Rogers and has requested this mouthful: Portia Lee James DeGeneres. (Beats me where the "James" comes from.)

Besides, it shouldn't be all that surprising that as gay couples seek acceptance and equality in a heterosexual institution some might also adopt historically patriarchal traditions. Marriage equality is fundamentally about equal access -- and that includes access to even the most retro of relationship dynamics, for those who so choose. Ah, yes, choice. Despite the hyphenated byline, let me just state for the record: I have no great investment in other people's surnames. Keep your maiden name, change it, combine two surnames into a funky new name, do like my parents and slap a dash between two family names and leave it for your offspring to puzzle over when they reproduce -- whatever your little heart desires! As long as everyone has equal access to those choices, I really could not care less.