How propagandists function: Exhibit A

Jeffrey Goldberg, in the new cover story in The Atlantic, on an Israeli attack on Iran:

Israel has twice before successfully attacked and destroyed an enemy's nuclear program. In 1981, Israeli warplanes bombed the Iraqi reactor at Osirak, halting -- forever, as it turned out -- Saddam Hussein's nuclear ambitions; and in 2007, Israeli planes destroyed a North Korean-built reactor in Syria.  An attack on Iran, then, would be unprecedented only in scope and complexity.

Good news!  Israel can successfully end a country's nuclear program by bombing them, as proven by its 1981 attack on Iraq, which, says Goldberg, halted "forever, as it turned out -- Saddam Hussein’s nuclear ambitions."

Saddam Hussein never gave up his hope of turning Iraq into a nuclear power. After the Osirak attack, he rebuilt, redoubled his efforts, and dispersed his facilities. Those who have followed Saddam's progress believe that no single strike today would eradicate his nuclear program.

When it suited him back then, Goldberg made the exact opposite claim, literally, of the one he makes today.  Back then, Goldberg wouldn't possibly claim what he claims now -- that the 1981 strike permanently halted Saddam's "nuclear ambitions" -- because, back then, his goal was to scare Americans about The Threat of Saddam.  So in 2002, Goldberg warned Americans that Saddam had "redoubled" his efforts to turn Iraq into a nuclear power after the Israeli attack, i.e., that Saddam had a scarier nuclear program than ever before after the 1981 bombing raid.  But now, Goldberg has a different goal:  to convince Americans of the efficacy of bombing Iran, and thus, without batting an eye, he simply asserts the exact opposite factual premise:  that the Israelis successfully and permanently ended Saddam's nuclear ambition back in 1981 by bombing it out of existence (and, therefore, we can do something similar now to Iran).

This is what a propagandist, by definition, does:  asserts any claim as fact in service of a concealed agenda without the slightest concern for whether it's true.  Will the existence of a vast and menacing Iraqi nuclear program help my cause (getting Americans to attack Iraq)?  Fine, then I'll trumpet that.  Now, however, it will help my cause (mainstreaming an attack on Iran) to claim that the Israelis permanently ended Iraq's nuclear efforts in 1981, thus showing how well these attacks can work.  No problem:  I'll go with that.  How can anyone take seriously -- as a Middle East expert and especially as a journalist -- someone with this blatant and thorough of an estrangement from any concern for truth?  Can anyone reconcile these factual claims?

Jonathan Schwarz, who flagged this contradiction, documents how Goldberg's dishonest propaganda begins in the very first sentence of his new Atlantic article, which reads:  "It is possible that at some point in the next 12 months, the imposition of devastating economic sanctions on the Islamic Republic of Iran will persuade its leaders to cease their pursuit of nuclear weapons."  Schwarz explains the obvious:

The official position of the U.S. intelligence community about this remains the 2007 National Intelligence Estimate. And it said Iran stopped pursuing nuclear weapons in 2003.  Maybe it was wrong, or maybe something's changed since then.  But it is the essence of Goldberg-itude to simply ignore this and assert the opposite as unquestionable fact.

In other words, the core premise of Goldberg's article -- that Iran is currently pursuing nuclear weapons -- is asserted, in the very first sentence, as indisputable fact without so much as acknowledging, let alone resolving, the substantial evidence casting serious doubt on that scary claim.  Sound familiar?  Moreover, as Schwarz compellingly documents, Goldberg's latest historical assertion -- that the 1981 Israeli attack ended Saddam's nuclear efforts -- is the precise opposite of reality:  Iraq had no genuine nuclear weapons program prior to 1981, but it was the Israeli attack which caused Saddam to conclude that he needed one.  That is what spawned the very substantial Iraqi efforts from 1981 to 1991 to develop nuclear weapons:  efforts which were actually ended by Operation Desert Storm and the subsequent U.N. inspection regime (which is what Scott Ritter relentlessly -- and, thanks to the likes of Goldberg, with futility -- attempted to point out in the run-up to the American attack on Iraq).

Goldberg wants to obfuscate those facts lest one conclude:  just as happened with Iraq, nothing would spur an Iranian desire for nuclear weapons more than a bombing campaign against their country.  If you were an Iranian, is there anything that would convince you of the need for nuclear weapons more than watching Israel bomb your country?  I always thought it was difficult to imagine anything that could be more effective in convincing rational Iranians to proliferate than watching the U.S. invade and bomb at will nations that lack nuclear weapons while treating with the utmost respect those which have them.  What could possibly incentivize countries in general -- and Iran in particular -- to want to acquire nuclear weapons more than that behavior?  If anything could, it would be an Israeli (or American) attack on Iran. 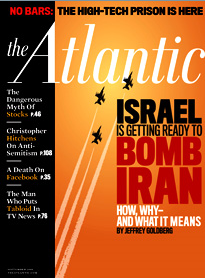 More important than these specific factual contradictions, Schwarz very astutely describes Goldberg's role in the propaganda effort concerning Iran.  Goldberg is not Bill Kristol or Charles Krauthammer, at least in terms of function.  He's not going to run around overtly beating his chest demanding that the U.S. attack Iran (or that the U.S. support Israel's attack):  at least not yet.  Although Goldberg did precisely that in the run-up to the attack on Iraq, his function now is more subtle, and more insidious.  He's nothing if not shrewd, and certainly shrewd enough to know that if he spouts nakedly bellicose demands for a war with Iran, he'll be quickly dismissed as a neocon fanatic, especially in light of his discredited and falsehood-filled campaign to persuade Americans to attack Iraq.  Indeed, Goldberg himself notes that even George Bush derided Kristol and Krauthammer as "the bomber boys."  He's much too smart to let himself be consigned to the lowly and limited (though important) role of fanning the flames of right-wing fanaticism; he's intent on re-branding himself after what he did in 2002 and 2003 and preserving his mainstream influence.

Thus, his pose is objective journalist.  He'll feign "ambivalence" about whether Iran should be bombed -- thus showing how thoughtful and non-ideological he is -- while infecting the discourse with the kinds of factual falsehoods documented here, all in service of skewing the debate towards ensuring an attack happens.  At its core, it's only a slightly modified version of what he did with Iraq (I'm merely "reporting" on Saddam's extensive relationship with Al Qaeda and his nuclear program/I'm merely "reporting" on the view of Israeli leaders that "a nuclear Iran poses the gravest threat since Hitler to the physical survival of the Jewish people").

It's really one of the strangest and most revealing facts that the "objective journalist" to whom America's political elites most faithfully turn for "reporting" on the Middle East is someone whose loyalty to Israel is so overarching that he actually went and joined the IDF (just try to imagine an American journalist reporting on this conflict for a large media outlet who previously joined the Iranian military or the military of any predominantly Muslim country).  There's nothing wrong per se with his doing so or with maintaining loyalty to other countries; many Americans do so with all sorts of countries and for all sorts of reasons.  It's also true that Goldberg's intense, Israel-devoted agenda doesn't preclude some good reporting; there are interesting and even revealing aspects in his article about how Israeli leaders think about Iran, or at least how they want Americans to believe they think about Iran.

But Jeffrey Goldberg is no more of an objective reporter on such matters than Benjamin Netanyahu is, and the fact that so many are willing to treat him as though he is provides a valuable testament to the ongoing vitality of the Supreme Law of Beltway Life:  Seriousness credentials, once vested, can never be revoked, no matter how grave one's past sins of falsehood and error are.  The purpose of this Atlantic article is as obvious as it is odious:  to mainstream the debate over an Israeli or American attack on Iran by defending its rationale, all masquerading as objective reporting (I'm merely describing the substantial possibility that it could happen and, if it does, why it would be justifiable).  I'm tempted to say that anyone who falls for Jeffrey Goldberg's act again deserves what they get, except that -- as always -- they're not the ones who will pay the price for the fallout.

Goldberg's article is, needless to say, suffused with comparisons of Iran to Nazi Germany -- one after the next like this:

"The only reason Bibi [Netanyahu] would place Israel's relationship with America in total jeopardy is if he thinks that Iran represents a threat like the Shoah," an Israeli official who spends considerable time with the prime minister told me. "In World War II, the Jews had no power to stop Hitler from annihilating us. Six million were slaughtered. Today, 6 million Jews live in Israel, and someone is threatening them with annihilation. But now we have the power to stop them. Bibi knows that this is the choice."

No discussion of any of this is complete without noting that it was endlessly claimed that it was Saddam who was the New Hitler in order ratchet up fear levels and justify an attack that country, too.  How many times can we be persuaded to attack the New Hitler?