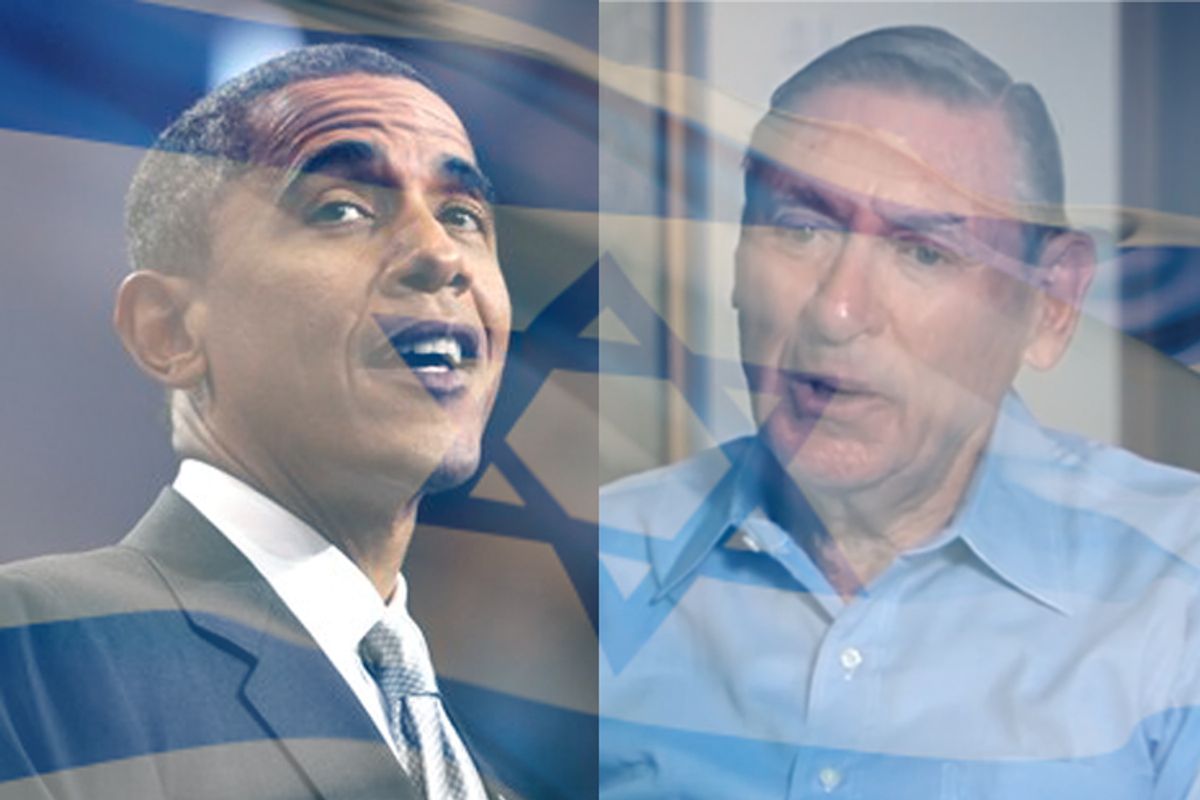 It's not often the curtain is lifted on how big campaign contributors can exert influence once their favored candidate is in office. But Jeffrey Goldberg's big new article on Israel and Iran in the Atlantic provides an apparent example of just that.

In short: a top Israeli general traveled to Chicago to ask a top Obama contributor and supporter of Israel, billionaire Lester Crown, to pressure the White House to take a tougher line on Iran.

And Salon's review of White House visitor logs shows that Crown had a personal appointment with Obama confidante Valerie Jarrett in the West Wing in late April -- though it's not known whether Iran came up.

Here's the passage from Goldberg's article -- with some more details below:

Not long ago, the chief of Israeli military intelligence, Major General Amos Yadlin, paid a secret visit to Chicago to meet with Lester Crown, the billionaire whose family owns a significant portion of General Dynamics, the military contractor. Crown is one of Israel’s most prominent backers in the American Jewish community, and was one of Barack Obama’s earliest and most steadfast supporters. According to sources in America and Israel, General Yadlin asked Crown to communicate Israel’s existential worries directly to President Obama. When I reached Crown by phone, he confirmed that he had met with Yadlin, but denied that the general traveled to Chicago to deliver this message. “Maybe he has a cousin in Chicago or something,” Crown said. But he did say that Yadlin discussed with him the “Iranian clock”—the time remaining before Iran reached nuclear capability—and that he agreed with Yadlin that the United States must stop Iran before it goes nuclear. “I share with the Israelis the feeling that we certainly have the military capability and that we have to have the will to use it. The rise of Iran is not in the best interest of the U.S.

“I support the president,” Crown said. “But I wish [administration officials] were a little more outgoing in the way they have talked. I would feel more comfortable if I knew that they had the will to use military force, as a last resort. You cannot threaten someone as a bluff. There has to be a will to do it.”

The article doesn't address how or whether Crown passed along the message (though if he hadn't before, he has now). But there are a couple reasons why the White House would listen if Crown came calling.

An Illinois investor whose core wealth comes from huge military contractor General Dynamics, Crown is worth with his family $4 billion, according to Forbes. He also owns stakes in the Chicago Bulls and various hotels and ski resorts.

He and his family have been extremely generous to Obama. Lester's son James bundled $500,000 or more for the Obama presidential campaign. James and his wife chipped in another $100,000 for the inauguration. Lester Crown along with employees of his investment firm, Henry Crown and Co. have donated over $100,000 to Obama's campaigns since 2003, according to a Johns Hopkins review. Crown has also given large contributions to many congressional Democrats, as well as a few Republicans.

In the heat of the primary in January 2008, when Obama's pro-Israel bona fides were under attack, Crown authored a mass email to Jewish voters vouching for Obama on the issue. (In the email, Crown said the fundamental issue that animates Crown's political involvement is "my deep commitment to Israel and to a strong U.S.-Israel relationship.") So the Israelis were shrewd in their choice of donor to reach out to.

White House visitor logs, which go up through April, show that Lester Crown has been to the White House twice. One visit was for a Hannukah reception in December which Obama attended, along with about 600 other visitors. The second visit is more suggestive: on April 29, Crown had a personal appointment with Obama confidante and fellow Chicagoan Valerie Jarrett in the West Wing. It's not clear whether this was before or after Crown got the message from Yadlin. We've reached out to Crown and will update this post if we hear back.

One other note: there was a report in Haaretz recently that Israeli Prime Minister Benjamin Netanyahu was able to apply "hidden pressure" on Obama -- and that it was "felt by Obama in Chicago." Was this a reference to the Crown affair?