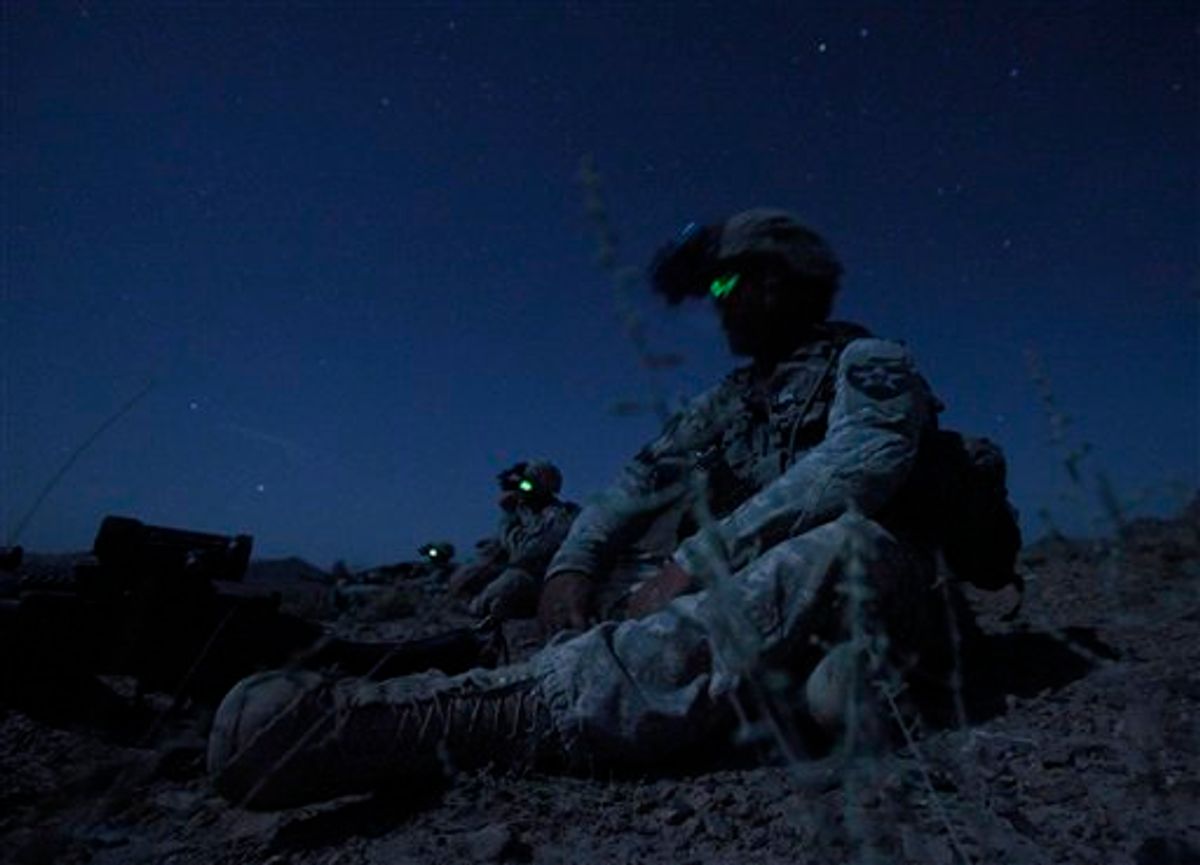 America’s biggest -- and only major -- jobs program is the U.S. military.

Over 1,400,000 Americans are now on active duty; another 833,000 are in the reserves, many full time. Another 1,600,000 Americans work in companies that supply the military with everything from weapons to utensils. (I’m not even including all the foreign contractors employing non-US citizens.)

If we didn’t have this giant military jobs program, the U.S. unemployment rate would be over 11.5 percent today instead of 9.5 percent.

And without our military jobs program personal incomes would be dropping faster. The Commerce Department reported Monday the only major metro areas where both net earnings and personal incomes rose last year were San Antonio, Texas, Virginia Beach, Virginia, and Washington, D.C. -- because all three have high concentrations of military and federal jobs.

This isn’t an argument for more military spending. Just the opposite. Having a giant undercover military jobs program is an insane way to keep Americans employed. It creates jobs we don’t need but we keep anyway because there’s no honest alternative. We don’t have an overt jobs program based on what’s really needed.

For example, when Defense Secretary Robert Gates announced Monday his plan to cut spending on military contractors by more than a quarter over three years, congressional leaders balked. Military contractors are major sources of jobs back in members’ states and districts. California’s Howard P. "Buck" McKeon, the top Republican on the House Armed Services Committee, demanded that the move "not weaken the nation’s defense." That’s congress-speak for "over my dead body."

Gates simultaneously announced closing the Joint Force Command in Norfolk, Virginia, that employs 6,324 people and relies on 3,300 private contractors. This prompted Virginia Democratic Senator Jim Webb, a member of the Senate Armed Services Committee, to warn that the closure "would be a step backward." Translated: "No chance in hell."

He wants to stop production of the C-17 cargo jet he says is no longer needed. But it keeps 4,000 people working at Boeing’s Long Beach assembly plant and 30,000 others at Boeing suppliers strategically located in 40 states. So despite Gates’s protests the Senate has approved ten new orders.

That’s still not enough to keep all those C-17 workers employed, so the Pentagon and Boeing have been hunting for foreign purchasers. The Indian Air Force is now negotiating to buy ten, and talks are underway with several other nations, including Oman and Saudi Arabia.

Ever wonder why military equipment is one of America’s biggest exports? It’s our giant military jobs program in action.

Gates has also been trying to stop production of a duplicate engine for the F-25 joint Strike Fighter jet. He says it isn’t needed and doesn’t justify the $2.9 billion slated merely to develop it.

But the unnecessary duplicate engine would bring thousands of jobs to Indiana and Ohio. Cunningly, its potential manufacturers Rolls-Royce and General Electric created a media blitz (mostly aimed at Washington, D.C. where lawmakers wold see it) featuring an engine worker wearing a "Support Our Troops" t-shirt and arguing the duplicate engine will create 4,000 American jobs. Presto. Despite a veto threat from the White House, a House panel has just approved funding the duplicate.

By the way, Gates isn’t trying to cut the overall Pentagon budget. He just wants to trim certain programs to make room for more military spending with a higher priority.

This sum doesn’t even include Homeland Security, Veterans Affairs, nuclear weapons management, and intelligence. Add these, and next year’s national security budget totals about $950 billion.

That’s a major chunk of the entire federal budget. But most deficit hawks don’t dare cut it. National security is sacrosanct.

Wouldn’t it be better to have a jobs program that created things we really need — like light-rail trains, better school facilities, public parks, water and sewer systems, and non-carbon energy sources — than things we don’t, like obsolete weapons systems?

Historically some of America’s biggest jobs programs that were critical to the nation’s future have been justified by national defense, although they’ve borne almost no relation to it. The National Defense Education Act of the late 1950s trained a generation of math and science teachers. The National Defense Highway Act created millions of construction jobs turning the nation’s two-lane highways into four- and six-lane Interstates.

Maybe this is the way to convince Republicans and blue-dog Democrats to spend more federal dollars putting Americans back, and working on things we genuinely need: Call it the National Defense Full Employment Act.