The controversial radio host goes off the rails making a point about race. Was she just misunderstood? 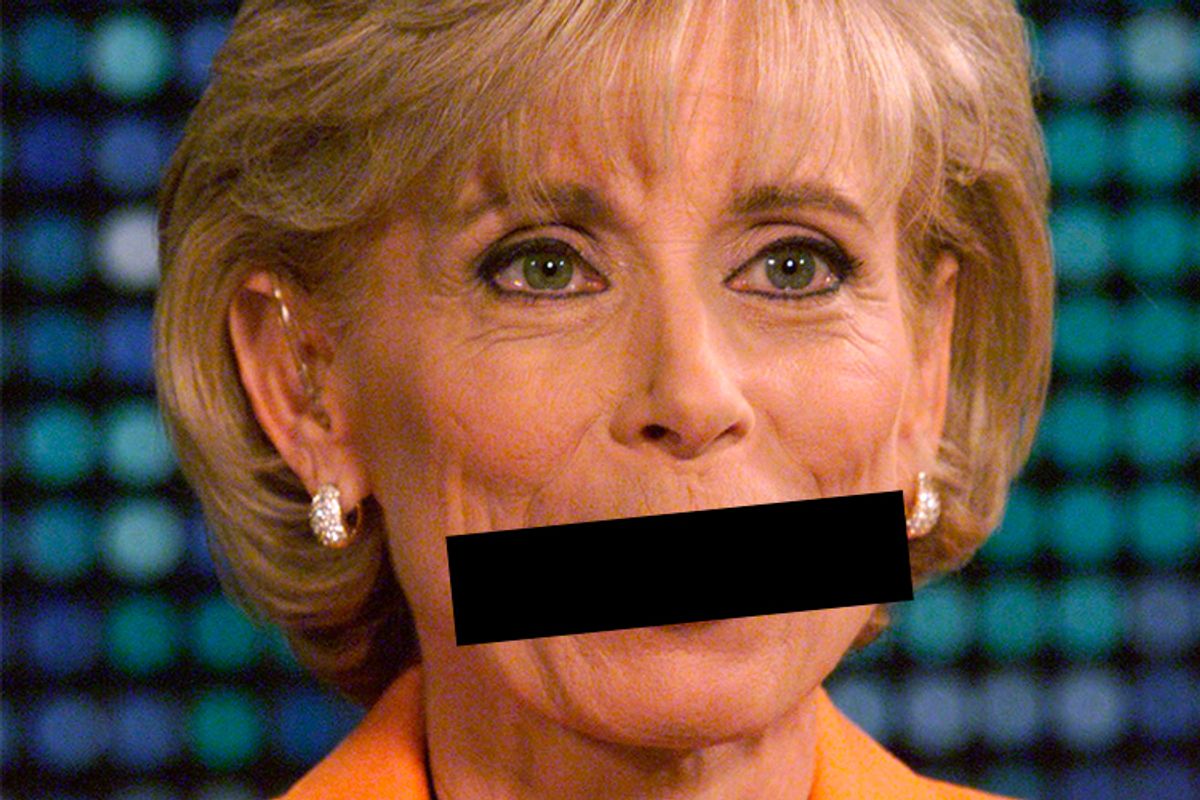 If you're going to make a point about racial sensitivity, Dr. Laura is probably not the best person for the job.

On Tuesday, the controversial radio host/crackpot fielded a call on her program from an African-American woman who said she was weary of her white husband's family and friends' racist comments. Dr. Laura immediately went on the offensive, asking the caller to cite specific examples, because "Some people are hypersensitive." The caller, a woman named Jade, explained that her husband's comrades ask her questions like "How do you black people like doing this? Do black people really like doing that?" -- which Schlessinger promptly dismissed as "not racist." It's funny, because I thought that ascribing a particular set of traits to a person based on the color of her skin was pretty much the textbook definition of racism, but, clearly, I'm no doctor. "A lot of blacks voted for Obama simply 'cause he was half-black,'" Dr. Laura continued. "Didn't matter what he was going to do in office. It was a black thing."

The caller then pressed on, asking: "What about the N-word? The N-word's been thrown around." To which Dr. Laura airily retorted: "Black guys use it all the time. Turn on HBO, listen to a buh-lack comic, and all you hear is nigger nigger nigger. I don't get it. If anybody without enough melanin says it, it's a horrible thing. But when black people say it, it's affectionate."

The caller, clearly agitated by now, nevertheless remained respectful, asking, "Is it ever OK to say that word?" Schlessinger responded by accusing her of having a "chip on [her] shoulder," telling her "Don't NAACP me" and that she possessed "a lot of what I hear from blackthink." For the kicker, she added, "If you're that hypersensitive about color and don't have a sense of humor, don't marry out of your race." In other words, why are you black people so uptight?

Predictably, Dr. Laura's odd discourse was manna from heaven for the Rev. Al Sharpton, who appeared on CNN to call the tirade "despicable." Also predictably, the national media was quick to seize upon on the incident, reporting Dr. Laura had used "the N-word." But she didn't say "the N-word." She said "nigger." She actually went on to say it at least seven more times, with considerable gusto. And though she didn't apply it directly to the caller, she did express a spectacular amount of ignorance as to why a word with such a rich and hateful history might be considered offensive, regardless of how casually it may be bandied about in certain circles.

Really, lady? It's simple. Because words are like firearms – if you don't know how to use them carefully, they can blow up in your face. Is it fair that Katt Williams can say the word and not give universal offense, and you can't? Well, America's colorful history of slavery, violence and racism doesn't exactly work out even-steven, so why not just let that one slide?

On Wednesday, perhaps feeling somewhat schooled by the furor, Dr. Laura issued an apology on her website. Though she said, "I did the wrong thing," adding that she was so upset about the incident she had to cut her show short, she also continued to display her trademark cluelessness. "I was attempting to make a philosophical point," she explained, adding that "I ended up, I’m sure, with many of you losing the point I was trying to make, because you were shocked by the fact that I said the word." Oh, if we'd only understood! Why can't we all just be smart enough to get Dr. Laura's philosophical points?

It's true that some people will always bristle at the word, regardless of context or nuance. Those are the same people who'd prefer to scrub up the works of Mark Twain, who believe that quoting someone saying a word is as bad as using it directly. But there are many more who are unwilling to let an old white woman off the hook for tossing around a slur in order to accuse black people of racial insensitivity. Schlessinger wasn't saying, "Your husband's friends say nigger? That's messed up." She was, when not dropping N-bombs, dismissively declaring that "we've got a black man as president and we've got more complaining about race than ever. I think that's hilarious." Yes, how dare a caller express discomfort with being stereotyped and subjected to epithets? That is SO funny. Like, black-guys-on-HBO funny. Too bad we can't all have a "sense of humor" like Dr. L's, because we've got "hypersensitivity, which is being bred by black activists." Maybe it's a black thing. Or maybe it's just a human thing. But for most people, Dr. Laura, it's just a knowing when to shut the hell up thing.