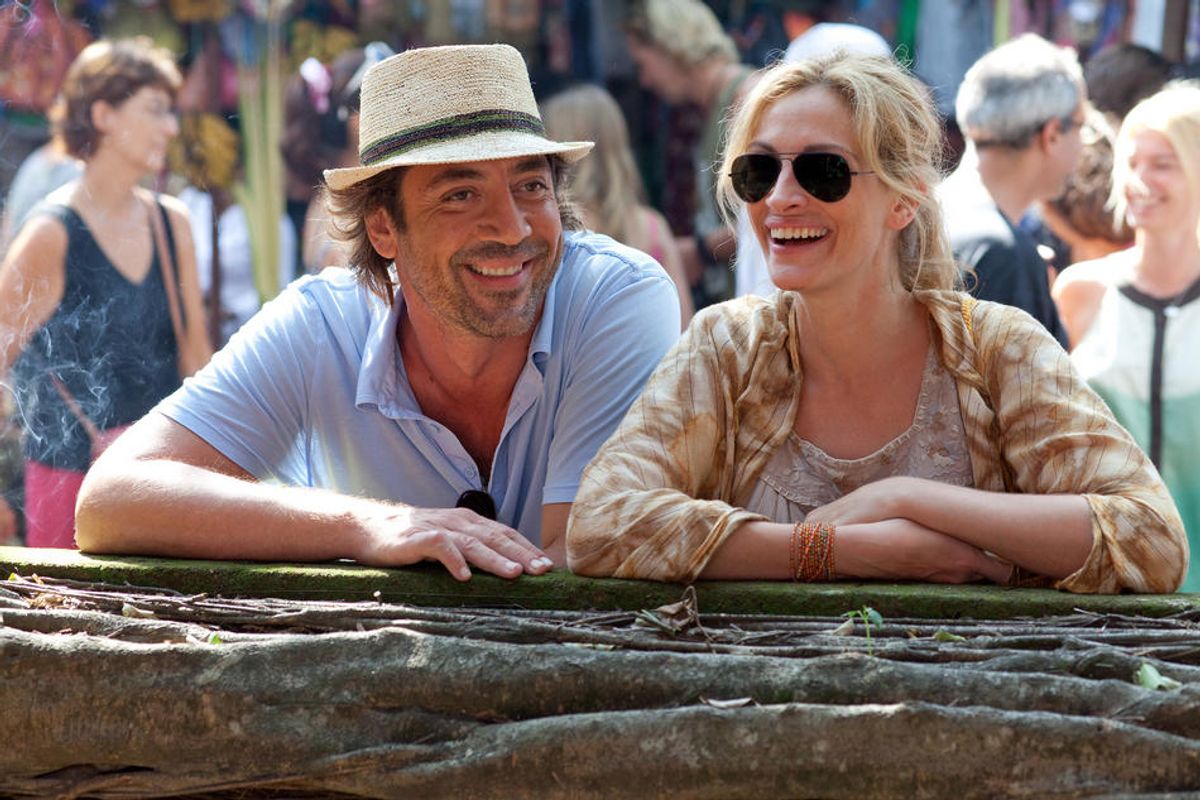 The enormous success of Elizabeth Gilbert's travel memoir "Eat, Pray, Love" is one of those paradoxes that pretty much define modern life. There is nothing affluent Westerners of the information-economy class like better than being told that our lives lack soulfulness, sensuality and a sense of purpose -- except, perhaps, for heaping derision on those who bring us this news. Every move in this dance is so well rehearsed that none of it can escape cliché: not the original complaint about our shallowness and materialism, not the presumptive moral high ground and false modesty of the evangelist-observer, not the exaggerated, Bill O'Reilly-style scorn of those who feel their iPhoned and Twitterized lifestyle is under attack.

As almost everyone reading this will already know, "Eat, Pray, Love" is the autobiographical and presumably truthful story of a woman who "pulls a geographic" (as some 12-steppers say) on an epic scale, fleeing first her troubled marriage and then her relationship with a hot, younger boyfriend for a year-long voyage of self-discovery to Italy, India and Bali. Gilbert is a sharp and amusing prose stylist and an openhearted critic of her own foibles and failings. She's aware that her personal and literary odyssey contains potential contradictions: The tale of a well-connected New York writer traveling the globe on somebody else's dime and sampling an array of seemingly disconnected experiences might strike many people as a symptom of our cultural dislocation and commodity fetishism, not a cure.

(A personal note before continuing: I knew Elizabeth Gilbert some years ago, when we worked together at Spin magazine. (She was then married to the man she leaves at the beginning of "Eat, Pray, Love.") She's a wonderful writer and an even better human being. There's no question that I think about her book -- and the mediocre Hollywood movie resulting from it -- differently than I otherwise might, because I have no doubts about the genuineness and generosity of Liz's intentions. I'm not surprised that she ended up writing a bestseller, and she's well suited to handle money and fame. I could speculate about her reactions to the merchandising campaign around "Eat, Pray, Love" -- which encompasses clothing, jewelry, tea and candles -- but then, many of her readers will have asked themselves the same question.)

At any rate, the secret of Gilbert's book was not so much in the subject matter or the story but in the execution. Whether you find it captivating or maddening -- and the marketplace has clearly voted for the former -- it's an artfully managed literary exercise, a thoughtful work of self-examination that's designed to encourage the reader's own. Movies don't do that well, or at least not the kinds of movies people build around Julia Roberts. Inevitably, director Ryan Murphy's version of "Eat, Pray, Love" (he also co-wrote the screenplay, with Jennifer Salt) is a shorthand romantic fiction, a pretty but hollowed-out imitation that's one remove from Gilbert's commentary on her experience and at least two removes from the experience itself.

Gilbert's fans may enjoy the lovely locations and the appealing supporting cast -- especially James Franco as her New York post-marriage lover and Javier Bardem as the Brazilian dreamboat who sweeps her off her feet in Bali -- and Murphy works hard to incorporate snatches of her wry, warm prose without turning the project into an audiobook. But the story of "Eat, Pray, Love" isn't really about people, places and things (although it has apparently done wonders for Bali's tourist trade). The pasta dinners, the long sessions of Hindu meditation and the glorious, curtain-fronted Balinese gazebos are meant to be accoutrements that enable a questing consciousness to uproot itself from routine and make a crucial inward journey. That's tough to convey when you've got Julia Roberts drifting around looking lovely and vulnerable in a succession of going-native costumes.

Roberts doesn't look much like Liz Gilbert -- although she has indeed absorbed some of her mannerisms -- but after all she gets paid to look like Julia Roberts. She gives a nice performance here, ranging from brassy to vulnerable to drunkenly flirtatious. It isn't her fault that the script tries to jam a memoir into the romantic-comedy template, spiced liberally with New Age nostrums, and can't quite get it right.

Non-devotees of the book are likely to find Murphy's "Eat, Pray, Love" an emotionally murky, inflated Lifetime Channel movie, alternately charming, cloying and dull. At 140 minutes, it's much too long to tell a compact story, but not nearly long enough to explain itself adequately. Stephen (Billy Crudup), the suburban husband Gilbert ditches, appears in several scenes but is more like a personality-free ghost than a character; marrying him and leaving him seem like equally mysterious decisions, since he doesn't exist. Her ensuing relationship with David (Franco), the underemployed, guru-devoted actor, appears to go instantaneously from hot late-night hookup to shacking up to angry, sexless unhappiness.

Murphy and Salt's screenplay skips over logistical realities that Gilbert herself never conceals: She was a highly-paid freelance writer who financed her world travel with a substantial publisher's advance; she had no job to quit because sampling Roman restaurants, Indian meditation centers and Indonesian oceanfront bars pretty much was her job. Gilbert's first two travel episodes, sampling Italian cuisine and Indian religion, play out as reasonably diverting light comedy, the first frivolous and the second more rueful. Characters come and go quickly -- Tuva Novotny as a Swedish gal-pal in Rome, Richard Jenkins as a heartbroken, aphorism-spouting Texan in India -- providing Gilbert with teachable moments along the way.

Of course a few scenes in a movie can do almost nothing to explain why Gilbert spent months in an Indian guru's ashram, or what it is she thinks she found there. And why should it? If the book flirted with the most hackneyed kinds of female escape fantasy, and dared itself to escape that genre, the film has almost nothing else to offer. When we finally get to Bali and rumpled Brazilian divorcé Felipe (Bardem) runs Gilbert's bike off the road with his jeep, you can almost hear a collective sigh of relief from the filmmakers (and their audience). A lonely guy, a lonely girl, a comic pratfall and an exotic location -- from here on in, we're golden.

It's not even ironic that one woman's painful and almost desperate attempt to reconnect with herself and the world became a calculated publishing phenomenon that has spawned a Julia Roberts movie and lines of prayer beads and leather-bound diaries. It's just the way the world is in an age when the most desirable commodities are private experiences that, at least at first, do not present themselves as commodities at all. (Am I wrong, or is going "off the grid" nearing critical mass as a hot lifestyle trend?) "Eat, Pray, Love" is a minor and superficial summer diversion that offers female viewers not much more than a two-hour escape fantasy, but that's not a crime. The fact that we find it almost impossible to talk seriously about the pervasive emotional or spiritual or psychological yearning that a story like this represents -- that's a bigger problem.