"The Expendables": Death of the old-school action hero 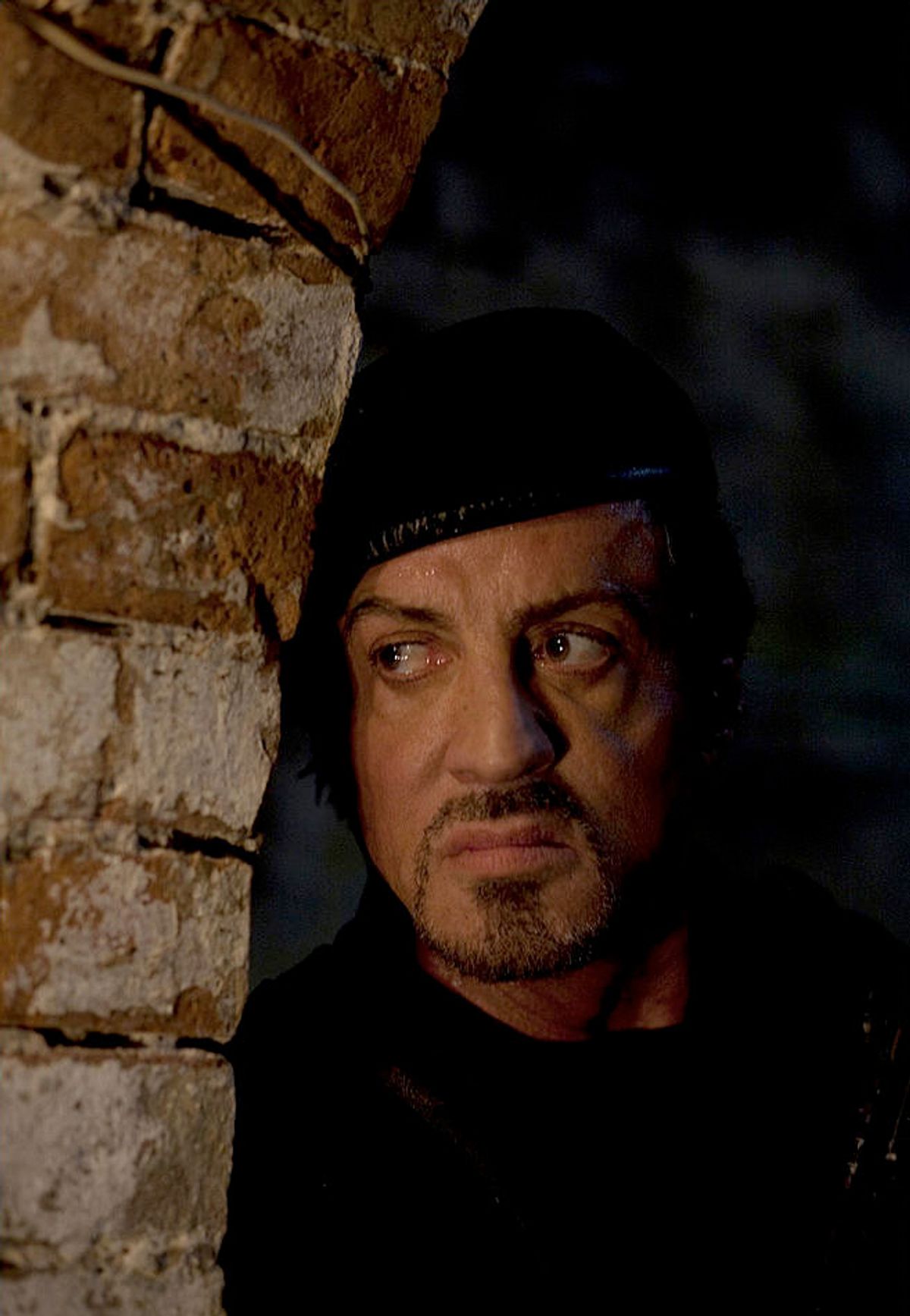 Waiting in line recently at the local multiplex, I witnessed a teenage boy point to the star-studded poster for Sylvester Stallone's action-movie throwback "The Expendables."

"I have to see this, just because it has everybody in it," he told his mother.

Obviously he had heard of Stallone, Bruce Willis and Arnold Schwarzenegger -- the three stars who form "The Expendables'" holy trinity of former gym-rat icons -- but what did they mean to him? The kid probably wasn't even born during the waning days of the Reagan and first Bush-era action movies, let alone the golden age of "Die Hard," "Rambo: First Blood Part II" or "The Terminator." Like others of his generation, he had grown up with a whole new kind of nuanced action hero, the Tom Cruises, Matt Damons and Angelina Jolies -- stars with a subtlety and self-awareness that Stallone and company never fully mastered. By jumbling this era's action stars with those of the past, "The Expendables" becomes an unintentional study in just how much the genre has changed in the past 30 years.

"The Expendables" assembles a cast half-comprised of '80s action stars -- this being the unofficial year of the '80s movie revival ("Hot Tub Time Machine," "MacGruber," "The Karate Kid," "The A-Team"). Alongside Stallone, Schwarzenegger and Willis are such luminaries as "Rocky IV" adversary Dolph Lundgren. It's a cast that first shot to fame in the post-"Star Wars" universe of the '80s, a blockbuster era in which spectacle, fantasy and escapism dominated the box office and a new film genre emerged: the body-worshiping, 120 rounds per minute, pro-military yet anti-authority action movie.

The popularity of these films made sense: Reagan's post-Vietnam desire to restore U.S. global dominance spiked a resurgence of patriotism, peaking with the success of George H.W. Bush's Operation Desert Storm; offerings like "Rambo" and "Predator" channeled those feelings by turning inexpressive Mr. Universes into symbols of American superiority and battlefield glory. Yes, Stallone's John Rambo was haunted by Nam, but he was also a one-man army with God-like combat skills. "Die Hard's" John McClane turned the average Joe into an anti-corporate, wife-saving, wisecracking populist daredevil. And as the Terminator, Schwarzenegger embodied the perfect male physique as a ruthless killer-turned-savior.

But soon arrived an unbeatable foe: camp. "Rambo" gave way to "Tango & Cash," "Die Hard" begat "Hudson Hawk," "Commando" became the appropriately titled "The Last Action Hero," and compared to the self-aware hipness of Tarantino, action stars and their bloated vehicles appeared bombastic, arrogant and embarrassingly stupid. As brawny stars were pushed to the margins by increasingly effects-laden extravaganzas ("Independence Day") and child-targeted blockbusters (the Pixar juggernaut), a new generation of action heroes -- Vin Diesel, Jason Statham and "The Rock" -- adjusted to the new cultural landscape by possessing a knowing irony and masculine vulnerability their predecessors had sorely fumbled.

In this sense Stallone's career is exemplary. After mythologizing his own Horatio Alger working-class hero tale in "Rocky," the Italian Stallion became the ultimate Reagan poster boy in the "Rambo" movies and went on to squander all remaining street cred with unintentionally derivative parodies ("Cobra," "Over the Top") and ill-conceived attempts to stretch his "talent" (screwball comedy in "Oscar," dystopian sci- fi in "Judge Dredd"). The more he fought against his severe limitations as a performer, the more he made them glaringly conspicuous, and by the time Sly attempted to restore his reputation playing alongside Harvey Keitel and Robert De Niro as a humbled, tubby sheriff in 1997's "Cop Land," the world had moved on.

As Stallone went, so did his brethren. One-dimensional martial arts experts like Steven Seagal and Jean-Claude Van Damme (both of whom were originally given roles in "The Expendables") disappeared into the straight-to-DVD abyss. Dolph Lundgren and Mickey Rourke -- the only one on this list who transitioned from actor to jock instead of the other way around -- all but vanished from the spotlight. Willis and Schwarzenegger's action careers stalled, but they sustained themselves by focusing on reputable projects ("Pulp Fiction," "The Sixth Sense") and the governorship of California, respectively.

Rather than reviving the actors' 80s heyday, "The Expendables" only demonstrates how much action films have changed in recent years. As directed and co-written by Stallone and centered around an ex-U.S. military mercenary team that runs a motorcycle club out of former member Rourke's tattoo parlor, the film is supposed to be a back-to-basics actioner in the same sweaty vein as "Rocky Balboa" and the last "Rambo" film. Stallone leads the elite group, which features Statham as a knife specialist, Jet Li as a martial arts master, Lundgren as a hot-tempered sniper, and Terry Crews and Randy Couture as artillery and bomb experts. (For what it's worth, the plot has them pursuing a band of Somalian pirates and then a Latin American dictatorship set up by rogue CIA man Eric Roberts.)

The obvious recent game changer in action filmmaking technique has been the "Bourne" series, which brought naturalism back into the action genre with shaky and blurred hand-held camerawork and borderline incomprehensible throw-it-against-a-wall-and-see-what-sticks editing. It's a technique that Stallone, bizarrely, tries to ape in his new film, and in the process he manages to make a complete mess of action sequences while retaining the ludicrously violent tone of his signature '80s work. When Stallone blew up a soldier with an exploding arrow in "Rambo: First Blood Part II," the shocking image served as a climactic highlight; just three minutes into "The Expendables," a bullet rips a machete-wielding pirate's torso away from his waist, an opening salvo quickly eclipsed by wave after wave of deafening, inconsequential bloodshed. Though chaotic, "Bourne's" cinematography is a visual statement that the world is a grittier and more complicated place than "Rambo" and its like ever acknowledged. The incongruity of "Bourne"-esque technical "realism" and outlandish, video game-style splatter in "The Expendables" is jarring: a mix of two styles signifying radically different politics.

The film's biggest selling point -- the Willis and Arnold cameos -- also disappoints. The three appear in the same room when Willis, playing a CIA man, pitches the Latin American mission to both Stallone and rival mercenary Schwarzenegger. And that's about it. "He wants to be president," Stallone mutters as Arnold walks away. The joke is uncomfortable: It doesn't just call attention to his real-life duties (discounting the fact that he's technically barred from ever reaching the Oval Office), it highlights the fact that the Governator is now much more than a failed action hero. With Willis, and his legitimate acting chops, nearby, it only makes Stallone seem pathetic: a failed star hoping for a comeback and pulling favors from his cooler, more successful friends.

Which brings us to the elephant in the room: age. Most of the cast is old, featuring three 50-plusers and two near-senior citizens, including Stallone himself. But that's one of the few sources of the film's appeal. For all its blood and guts, the film's rare enjoyable moments depend on the treehouse camaraderie among mostly over-the-hill, obsolete grown children, recapturing the blissful ignorance of the action movie's youth or else staving off the entropy of its possible death. Ending with a knife flying from the hands of Statham and a motorcycle caravan scored to "The Boys Are Back in Town," "The Expendables'" last-ditch effort to force viewers to care for its collection of butt-kicking G.I. Joe figures is almost endearing. Though the nostalgia permeating the film too often comes across as an opportunistic marketing gimmick, it's here that one feels not a little sadness for these preening he-men and their once culturally relevant dreams of big-screen glory. The film might be disingenuous, but at least the melancholy is real.