Did Petraeus break a promise to Obama?

The general told the president he would not try to scrap the Afghan pullout deadline. Now he's doing just that 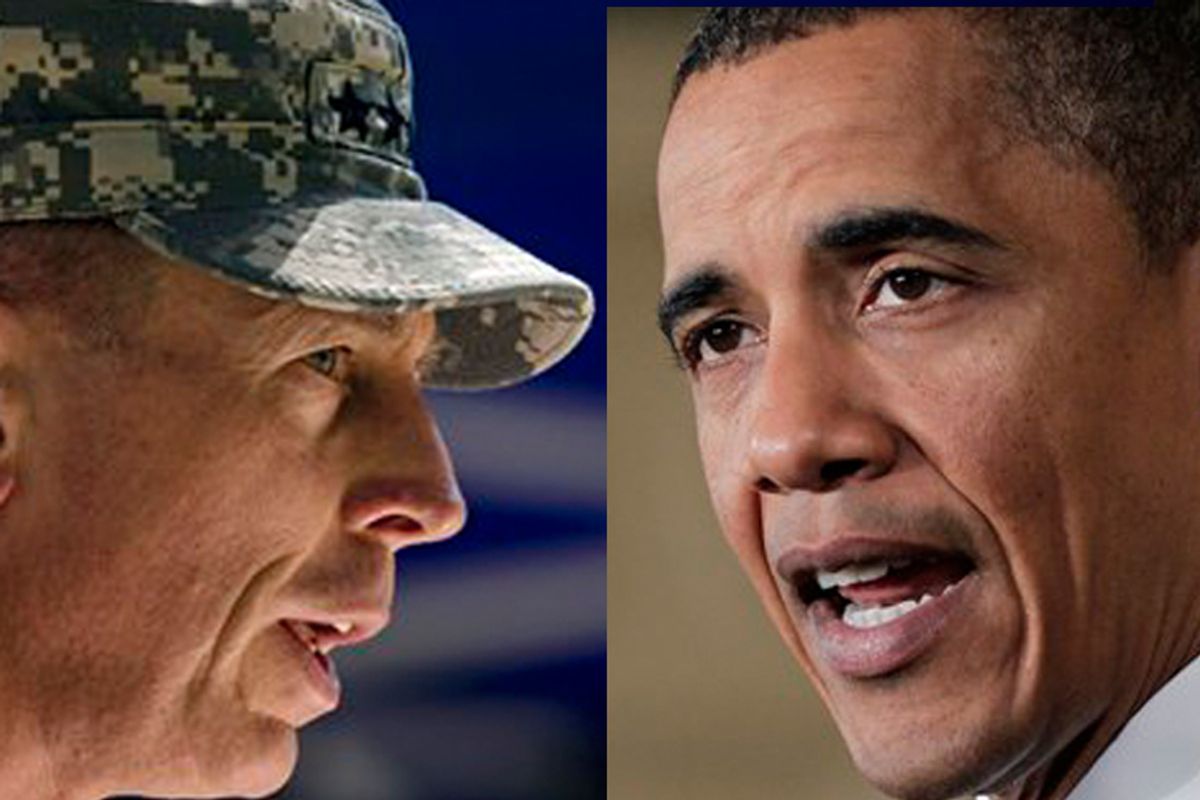 There are new signs that the Obama Administration and the military are preparing to effectively scrap the president's promise to begin a pullout from Afghanistan in July 2011.

The pullout date has always been somewhat squishy -- when Obama announced it in his speech at West Point in December 2009 he said the U.S. would "begin the transfer of our forces out of Afghanistan in July of 2011" (emphasis ours).

But according to a New York Times story earlier this week, Gen. David Petraeus is now leading a campaign to "minimize the planned withdrawal of some troops." And now, in a preview from the first interview he's given since he took over in Afghanistan from Gen. Stanley McChrystal, Petraeus seems less than enthusiastic about the July 2011 date. Asked about the date by David Gregory of Meet the Press (preview clip here), Petraeus responded that Obama has "expressed very clearly that what he wants from me is my best military advice."

But there's another wrinkle here. If Petraeus is indeed mounting a campaign to minimize the July 2011 pullout or scrap it altogether, it's completely at odds with what he reportedly told the president in an Oval Office meeting before the West Point speech.

To explain: According to Jonathan Alter's book "The Promise," a high-access account of Obama's first year, the president specifically quizzed Petraeus about the feasibility of the July 2011 deadline -- and Petraeus promised he would not suggest scrapping that deadline if things didn't go well.

It's worth reading this passage, whcih describes a meeting just before the West Point speech (emphasis ours, h/t David Dayen):

Inside the Oval Office, Obama asked Petraeus, “David, tell me now. I want you to be honest with me. You can do this in 18 months?”

“Sir, I’m confident we can train and hand over to the ANA [Afghan National Army] in that time frame,” Petraeus replied.

“Good. No problem,” the president said. “If you can’t do the things you say you can in 18 months, then no one is going to suggest we stay, right?”

The president was crisp but informal. “Bob, you have any problems?” he asked Gates, who said he was fine with it.

The president then encapsulated the new policy: in quickly, out quickly, focus on Al Qaeda, and build the Afghan Army. “I’m not asking you to change what you believe, but if you don’t agree with me that we can execute this, say so now,” he said. No one said anything.

Obama was trying to turn the tables on the military, to box them in after they had spent most of the year boxing him in. If, after 18 months, the situation in Afghanistan had stabilized as he expected, then troops could begin to come home. If conditions didn’t stabilize enough to begin an orderly withdrawal of U.S. forces (or if they deteriorated further), that would undermine the Pentagon’s belief in the effectiveness of more troops. The commanders couldn’t say they didn’t have enough time to make the escalation work because they had specifically said, under explicit questioning, that they did.

Now that the transfer to the Afghan army is going poorly, Petraeus appears to be doing exactly what he said he wouldn't do: arguing for a longer, larger occupation. The question now is how Obama will respond.