This week in baseless Reagan hagiography

Why is it so hard for pundits to admit that Reagan was just as unpopular in 1982 as Obama is in 2010? 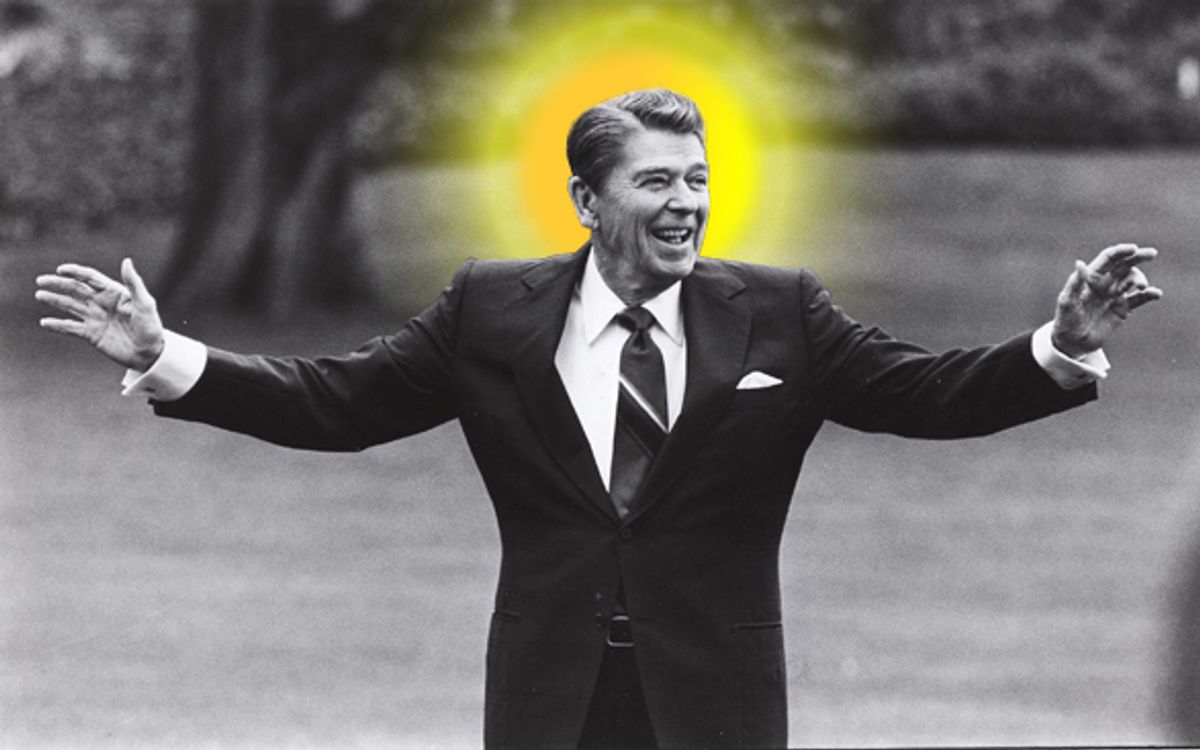 Former U.S. President Ronald Reagan, who forged a conservative revolution that transformed American politics, died on June 5, 2004 after a decade-long battle with Alzheimer's disease, U.S. media reported. Reagan is pictured waving to well-wishers on the south lawn of the White House on April 25, 1986, before departing for a summit in Tokyo. REUTERS/Joe Marquette/FILE SV (Â© Reuters Photographer / Reuters)
--

I swear, I want to stop writing about the nearly-identical political trajectories (at least so far) of the Reagan and Obama presidencies. But too many pundits just can't seem to get it through their heads that Reagan, as president, was not some magical political super-being who was immune to sagging public confidence, poor midterm election prospects, and intraparty dissent and second-guessing that Obama is now faced with. And this week brought us two more egregious offenders.

First, on Wednesday, came a Wall Street Journal Op-Ed from Fouad Ajami, who sort-of acknowledges the parallel between Reagan's standing as the 1982 midterms approached and Obama's today, but then quickly brushes it aside, arguing that Reagan's "deep and true" connection with the public ultimately saw him through -- and that Obama is doomed because he lacks this connection. Here's Ajami's condensed history of the Reagan presidency:

Big as Reagan's mandate was, in two elections, the man was never bigger than his country. There was never narcissism or a bloated sense of personal destiny in him. He gloried in the country, and drew sustenance from its heroic deeds and its capacity for recovery. No political class rode with him to power anxious to lay its hands on the nation's treasure, eager to supplant the forces of the market with its own economic preferences.

To be sure, Reagan faltered midway through his second term—the arms-for-hostages trade, the Iran-Contra affair, nearly wrecked his presidency. But he recovered, the nation rallied around him and carried him across the finish line, his bond with the electorate deep and true. He had two years left of his stewardship, and his political recovery was so miraculous that he, and his first mate, Secretary of State George P. Shultz, would seal the nation's victory in the Cold War.

Let's leave aside Ajami's ridiculous contentions about the Reagan crew's respect for the public treasury (ahem); others have provided the context he ignores. The main problem with Ajami's narrative is that there's just no evidence that the unbreakable bond between the president and his people that he celebrates ever really existed -- or that Reagan's poll numbers at any point in his presidency were really that remarkable.

Where, for instance, was the "deep and true" bond in in the 1982 midterms, when double-digit unemployment prompted voters to toss 26 of Reagan's Republican allies out of Congress and to hand seven new governorships to Democrats and 11 state legislative chambers to the Democrats? Or where was it in 1986, when a pre-Iran-Contra Reagan pleaded with Americans -- the Americans with whom he supposedly shared a mutually affectionate relationship -- to preserve his party's control of the Senate, only to watch as voters handed Democrats an eight-seat gain and their first Senate majority since 1980. Moreover, where was it after Reagan left office -- after, in Ajami's words, his adoring countrymen had "carried him across the finish line" -- when a savings-and-loan crisis and recession caused by his policies undermined his Republican successor and prompted Americans to revise downward their estimation of the Gipper. It's completely inconvenient to Ajami's narrative, but it's worth remembering that by the summer of 1992, just 24 percent of Americans said their country was better off because of the Reagan years, while 40 percent said it was worse off -- and that more Americans (48 percent) viewed Reagan unfavorable than favorably (46 percent). "Deep and true" bond, indeed.

Of course, if you're not intent on pushing a narrative of the 1980s that casts Reagan as a magical being, then the ups and downs described above make perfect sense. Unemployment was soaring in 1982, so he and his party were blamed -- and his personality counted for nothing. It fell dramatically in 1983 and 1984, so Reagan was reelected decisively, and while it was still strong in 1986, voters still grew restive (the six-year itch!) and voted for the other party. Then, when the early '90s brought a painful recession, voters were willing to embrace Democratic claims that their problems were the result of 12 years of Reagan-Bush policies. Bill Clinton, don't forget, ran against Reagan just as much as he ran against George H.W. Bush in 1992 -- and it worked. These explanations aren't as poetic as Ajami's, but at least they're accurate.

The next offender comes to us courtesy of Brendan Nyhan, who points to a new piece by the New Republic's John Judis (which isn't yet available online). Judis argues that Reagan/Obama analogies are flawed because Americans in 1982 had more confidence in Reagan's economic program than they have today in Obama's. Nyhan does a nice job rebutting this, but I can't resist highlighting one of Judis' claims:

Contrast Obama's attempt to develop a politics to justify his economic program with what Reagan did in 1982. Faced with steadily rising unemployment, which went from 8.6 percent in January to 10.4 percent in November, Reagan and his political staff, which included James Baker, Mike Deaver, and Ed Rollins, forged a strategy early that year calling for voters to "stay the course" and blaming the current economic troubles on Democratic profligacy. "We are clearing away the economic wreckage that was dumped in our laps," Reagan declared. Democrats accused them of playing "the blame game," but the strategy, followed to the letter by the White House for ten months, worked. The Republicans were predicted to lose as many as 50 House seats, but they lost only 26 and broke even in the Senate.

So, the evidence that public confidence in Reagan's program measurably altered his political standing is that his party lost fewer seats than some people predicted they would in the '82 midterms? Think about this for a minute: Predictions for this fall's midterms are literally all over the map -- I have actually seen pundits make the case that Democrats could lose as many as 100 seats. So no matter how many losses Democrats suffer this fall -- in the 20s, 30s, 40s, or whatever -- it will be possible for some writer 30 years from now to claim that "Democrats were predicted to lose as many as 100 House seats, but they only lost XX" and to connect this supposedly better-than-expected showing to some Obama trait or another.

Judis' version of history is also undercut by the way the '82 midterm results were regarded at the time. The Reagan White House tried to put a nice spin on it, but almost no one -- not even Republicans -- was buying it. Here's some analysis from the New York Times right after the election that pretty well sums up how the political class viewed the results:

A big turnout and the splintering of the 1980 Reagan coalition lifted Democrats to seven new governorships and 26 more seats in the House of Representatives while keeping the Republicans from expanding their 54-seat Senate majority. The House losses were the most serious since World War II for an elected President in the first mid-term election after his party captured the White House. (The average loss has been 10 seats.)

The 1980 Reagan swing had kindled Republican hopes of consolidating a national majority of hard-core Republicans, bluecollar crossovers, Southerners, the elderly and independents. Even Jews and liberals went less Democratic than usual. That hope foundered this year when most groups returned to traditional voting patterns, according to New York Times/CBS News polls.

After the '82 vote, Reagan faced calls from his fellow Republicans not to seek reelection in 1984. Some outspoken conservatives even demanded -- publicly -- that he be challenged in the '84 primaries if he went ahead and ran. (Jack Kemp, William Armstrong and Jesse Helms were all touted as would-be challengers.) Liberal Republicans (they still existed, sort of) were equally discontent; a pre-scandal Bob Packwood made a late '82 trip to New Hampshire, teasing a possible bid of his own. And Capitol Hill Republicans began charting a course independent of the Reagan White House.

All of this stopped only when the economy -- and, as a result, Reagan's poll numbers -- began showing life in '83. There's just no need to bend over backwards trying to invent reasons for Reagan's post-'82 strength when we already have a perfectly good one.