Before the perpetually frazzled cartoon character became a "30 Rock" punch line, she broke ground for women 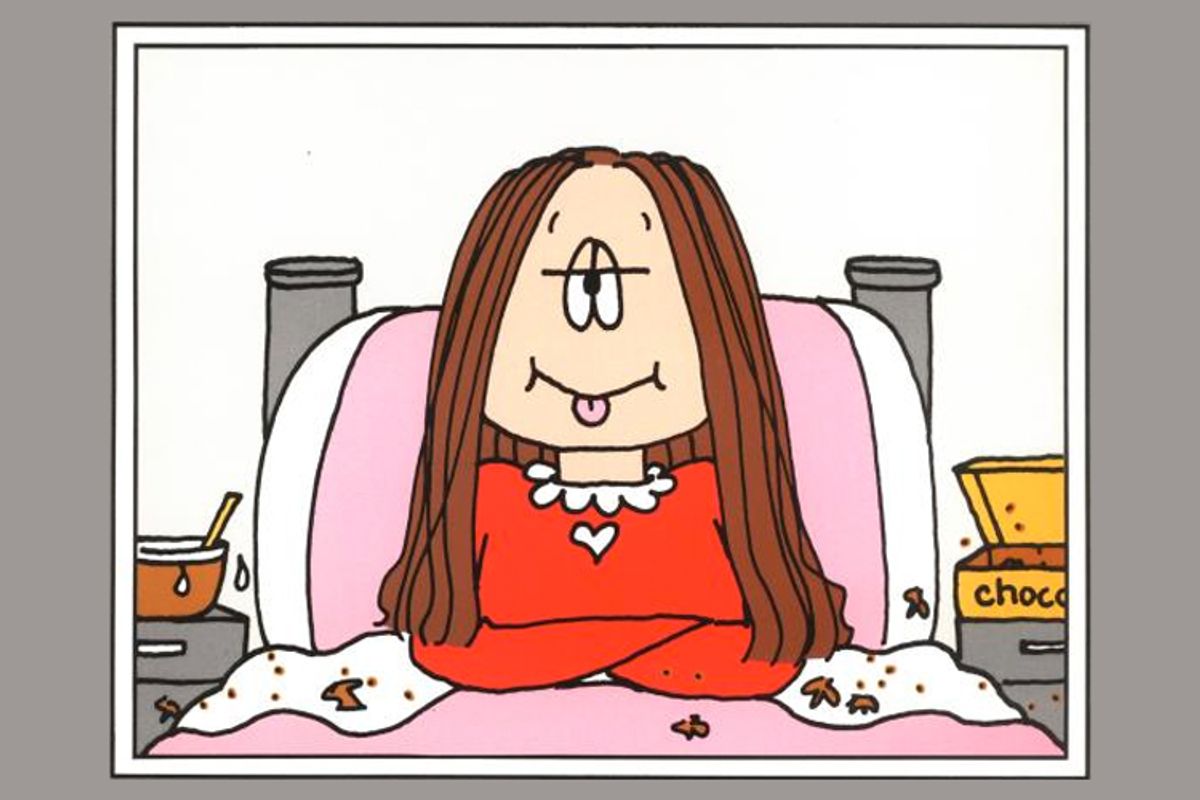 What can you say to the news that after 34 years, the funny page's greatest foe of swimsuits and dressing room mirrors, "Cathy," is retiring? I mean, besides, "ACK"? Citing her "creative biological clock," strip creator Cathy Guisewite announced late Wednesday that her chocolate-obsessed, flibbertigibbety cartoon character was packing it in. The last strip will run October 3.

In her decades of on-again-off-again dieting and dating, "Cathy" has gained a place in the comic canon -- most notably as shorthand for a particular form of tame-yet-surprisingly-shrill female-centric humor. The last thing anybody wants to be accused of is being as funny as a "Cathy" cartoon. It's right up there with being as insightful as a Glenn Beck monologue.

But not everybody can be Wonder Woman or Brenda Starr. Though Cathy, who debuted at the height of '70s-era feminism, never fit into the "Family Circus" or "For Better or Worse" domestic sphere. She was never wry like "The Boondocks" and "Calvin and Hobbes," or political like "Doonesbury." Yet her mere existence, as the star of the first nationally syndicated strip by a woman, as a lady in the funny pages, is political in itself. She has, for most of her run, been a semi-satisfied, semi-lonely single gal (finally tying the knot with longtime beau Irving five years ago), toiling away at her job while struggling with body image, meddling parents and, frankly, the banal crap that most of us shlubs thanklessly wrangle every day. Empowerment is for her usually a fleeting state in an otherwise self-doubting existence. She may be that nightmare, neurotic gal pal whose calls you screen, but girlfriend, admit it; sometimes she's also your own dark side.

Guisewite based her character on her own humble travails, and while she has surely wrung a lifetime's worth of gags out of what she refers to as the Four Guilt Groups: love, work, food and mom, she has also consistently stayed true to the conflicted, unfabulous world of modern womanhood. Cathy will never be cool. Her face will never appear on a hipster's T-shirt, even ironically. But when she opines that "I’m dealing with wrinkles, sags, bags, lines circles, flab … 50 billion younger women as my competition … and [have] about fifteen minutes left to decide whether or not I’ll ever be a mother" she could be straight out of the "Eat, Pray, Love" handbook. Is it any wonder that on "30 Rock," Tina Fey's appetite-driven, wardrobe-challenged Liz Lemon has been more than once been compared to her? She was Bridget Jones before there was Bridget Jones; she was Carrie Bradshaw with a bigger dress size and a considerably more modest lifestyle.

That's why she's endured as long as she has. Despite our strides, the big issues for women -- the competing pressures and demands for our attention and emotional resources, the cracks in our own feminist ideals -- remain largely the same they always were. And 30 years after asking, "What do you mean, I still don't have equal rights?" Cathy -- and the rest of us -- are still struggling toward the dream of a better world for our womenfolk. A world in which we can have it all: respect, career success, boundless love -- and pants that make our butts look sensational.