The phenomenon set off a horde of tourists looking for enlightenment in Asia. They were better off staying home 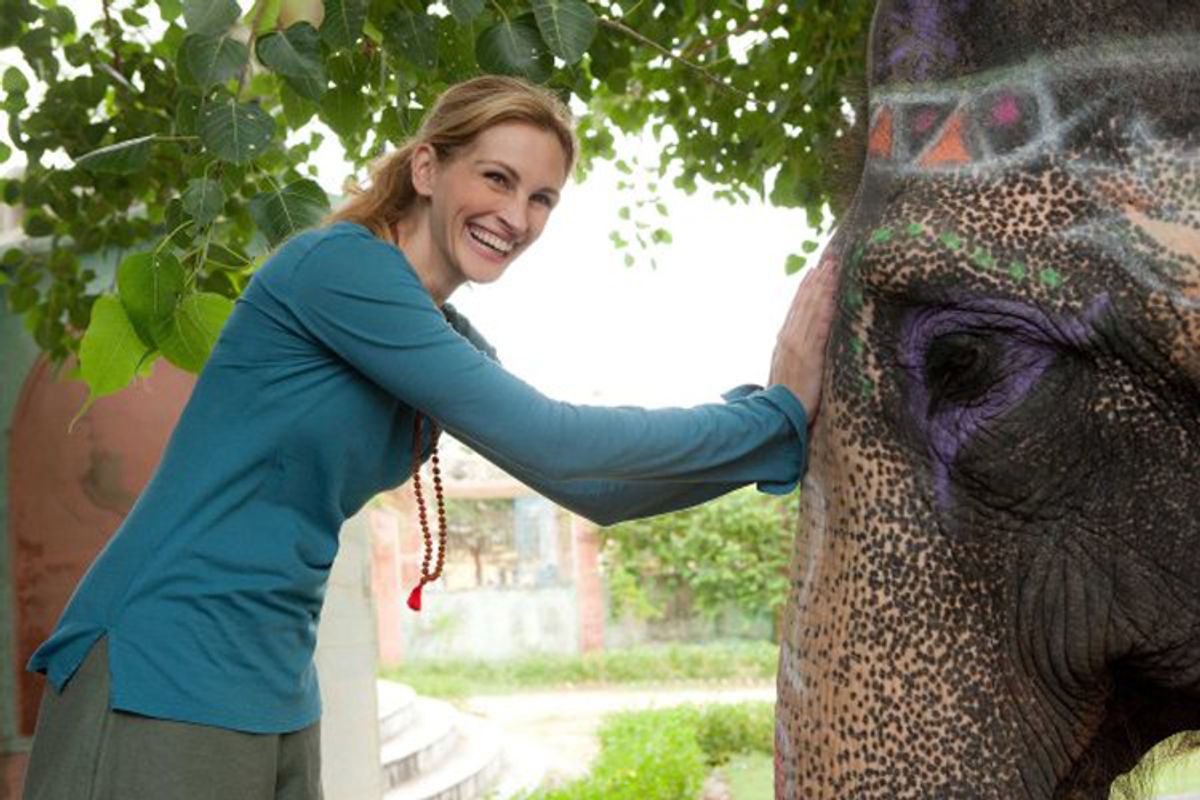 For the longest time I thought "Eat, Pray, Love" was a sequel to "Eats, Shoots and Leaves."

I confess I never read Elizabeth Gilbert's bestseller except for browsing through a few pages in a copy sitting on a friend's bedside. I enjoyed the writing. Gilbert is warm and sympathetic. The story of picking yourself up after losing your way has universal appeal even if we all can't recharge under the Tuscan sun.

It's not Gilbert's fault but I have an instinctive reflex reaction to books about white people discovering themselves in brown places. I want to gag, shoot and leave.

In a way I almost prefer the old colonials in their pith helmets trampling over the Empire's far-flung outposts. At least they were somewhat honest in their dealings. They wanted the gold, the cotton, and laborers for their sugar plantations. And they wanted to bring Western civilization, afternoon tea and anti-sodomy laws to godforsaken places riddled with malaria and beriberi.

The new breed is more sensitive, less overt. They want to spend a year in a faraway place on a "journey." But the journey is all about what they can get. Not gold, cotton or indigo anymore. They want to eat, shoot films (or write books) and leave. They want the food, the spiritual wisdom, the romance. (To be fair, Elizabeth Gilbert does help her single mom Balinese healer build herself a house.)

I recently read William Dalrymple's "Nine Lives: In Search of the Sacred in Modern India." What I especially appreciated about the book was that it was really in the voice of his nine subjects. It was not about Dalrymple's spiritual journey through the thickets of faith and faith healers. Dalrymple said in an interview he was suspicious of "journey" books.

That was a faux pas. Later I noticed that Elizabeth Gilbert had kindly given him a blurb: "honest, edifying, and moving."

But as her character complained that she had "no passion, no spark, no faith" and needed to go away for one year, I couldn't help wondering, where do those people in Indonesia and India go away to when they lose their passion, spark and faith? I don't think they come to Manhattan. I wonder if there could be an exchange program for the passion-deprived, a sort of global spark-swap.

This is not to say "Eat, Pray, Love" just exists in a self-centered air-conditioned meditation cave and has no heart. It does have heart. It tries hard to be down with the people. So Julia Roberts rents a room in Italy whose ceiling looks like it might fall down any minute. And in India we see her with mosquito bites. Few Bollywood actresses would consent to such puffy indignities.

Of course, there is that slight problem: It is Julia Roberts.

It requires more than the normal suspension of disbelief when Julia Roberts announces she will eat that whole pizza and buy the "big girl jeans." And we see her trying to squeeze her Julia Roberts body into her jeans, struggling with the zipper and we know this is a fine, brave actor at work.

She tries not to be the foreign tourist, but she does spend an awful lot of time with the expats whether it's the Swede in Italy, the Texan in India or the Brazilian in Bali. The natives mostly have clearly assigned roles. Language teacher. Hangover healer. Dispenser of fortune cookie-style wisdom (knowledge is never so meaningful as when it comes in broken English, served up with puckish grins). The expats have messy histories but the natives' lives are not very complicated (other than that teenage arranged marriage in India). They are there as the means to her self-discovery. After that is done, it's time to book the next flight.

But all through the film this is what I was wondering. Why did Elizabeth Gilbert have to go to Italy, India and Indonesia to learn to eat, pray and love? Didn't anyone tell her America was the one-stop shop for all of it?

The United States is where I learned about all-you-can-eat buffets (of Indian food, no less).

This is where I was constantly fussed over by kind helpful ladies in my university town who wanted to chauffeur us heathen foreign students to church on Sunday.

And this is where we finally had the independence (and the coveted room of our own) to love, away from the prying eyes of parents, cousins, servants and neighbors.

But Elizabeth Gilbert/Julia Roberts had to board three airplanes to find that in a piecemeal fashion in Italy, India, Indonesia. I wondered why she was drawn to those three countries.

Is it because they all start with I?

Not inappropriate for a film that is ultimately about I, Me and Myself.

Nothing drove that home better than what happened after the screening ended. I went down in an elevator crammed with radiant women, all discussing when they teared up during the film, and how much they related to it, and its message of opening yourself up to the world. There was one woman in a wheelchair in the elevator. After we reached the lobby, the women, still chattering, marched out into the chilly San Francisco night. The woman in the wheelchair remained stranded behind the heavy doors.

This story was originally published by New America Media.