Let's not give Bush too much credit here 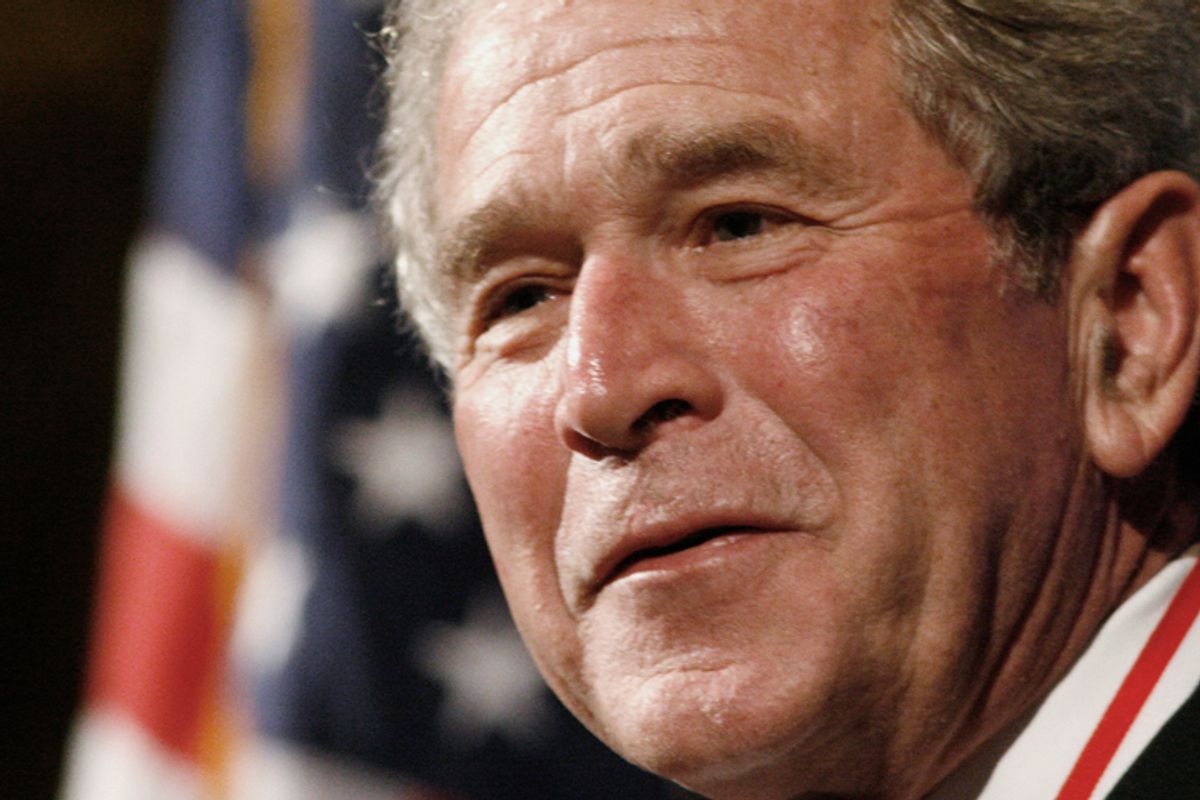 Politico has an interesting and well-reported piece up today about a topic I addressed last week: The Republican Party's increasingly overt embrace of Islamophobia.

It's worth reading, but it also advances the notion that the GOP's posture toward Islam represents a fundamental break with the example set by George W. Bush and his administration. It doesn't.

The rhetoric of a president matters, yes, and Bush does deserve credit for being mostly mature and responsible in his post-9/11 comments on Islam. But, as I noted last week, what matters more was his policy response to 9/11 -- a "global war on terror" that was squarely in line with what the "clash of civilizations" crowd had long been agitating for. It won him praise from Muslim-baiting conservative Christians, like Pat Robertson and Jerry Falwell, and it won him votes from casually Islamophobic voters outside the Bible Belt -- people who didn't think of themselves as intolerant but who thought it was time for America to start kicking butt "over there."

For all of the inclusive words Bush mouthed in public, he sure had a knack for attracting people who had nothing nice to say about Muslims. In fact, it could be argued that Bush himself is primarily responsible for the GOP's emergence as an anti-Muslim party.

Before he became president, the GOP was adrift. The anti-communist bluster that had united the party's factions for decades had stopped working with the fall of the Berlin Wall. But when Bush chose to fill his inner circle with hawkish neocons, and to listen to their pleadings after 9/11, he embraced a philosophy that told Islamophobes that they had a home in the GOP -- no matter how many nice words about Islam he said in public.

It may be that Bush, in his naiveté, saw no real conflict between the neocon vision his aides were pushing and his own sensitivity to the Muslim world (sensitivity inherited from his father, who championed an internationalist brand of Republicanism and who had close ties to the Arab and Muslim worlds). This might explain why, as his presidency evolved, Bush inched away from the Cheney crowd, resisting their pleas toward the end of his second term to bomb Iran. By then, perhaps, Bush had seen how irreconcilable the neocon agenda is from the foreign policy values his father championed. Not that it mattered: By his actions, he'd already ensured that Islamophobia would replace anti-communism as the glue to bind the GOP's factions.

A darker view is that Bush was playing a cynical game after 9/11 -- that he wanted to cater to the anti-Muslim crowd, but that he didn't want to scare off "softer" swing voters with harsh rhetoric. So he tried to have it both ways -- sort of like Richard Nixon in 1968, who portrayed himself in public as a civil rights champion while privately winning the blessing of Strom Thurmond and other Southern racists. As Rick Perlstein explains in "Nixonland":

Having quietly secured Strom Thurmond's loyalty, Nixon could now raise his voice against George Wallace without fear of the consequences of offending the South. "From what I've read," he said in an interview in New York, "Wallace's support is in the direction of the racist element. I have been in politics 22 years and I have never had a racist in my organization.

I don't know what George W. Bush's precise calculations were. But there is almost no daylight between his actions as president and the ugly themes that Republican leaders are now embracing.