Where is George W. Bush when America needs him?

Two former Bush aides speak out bravely in defense of the rights of Muslims, but their old boss remains silent 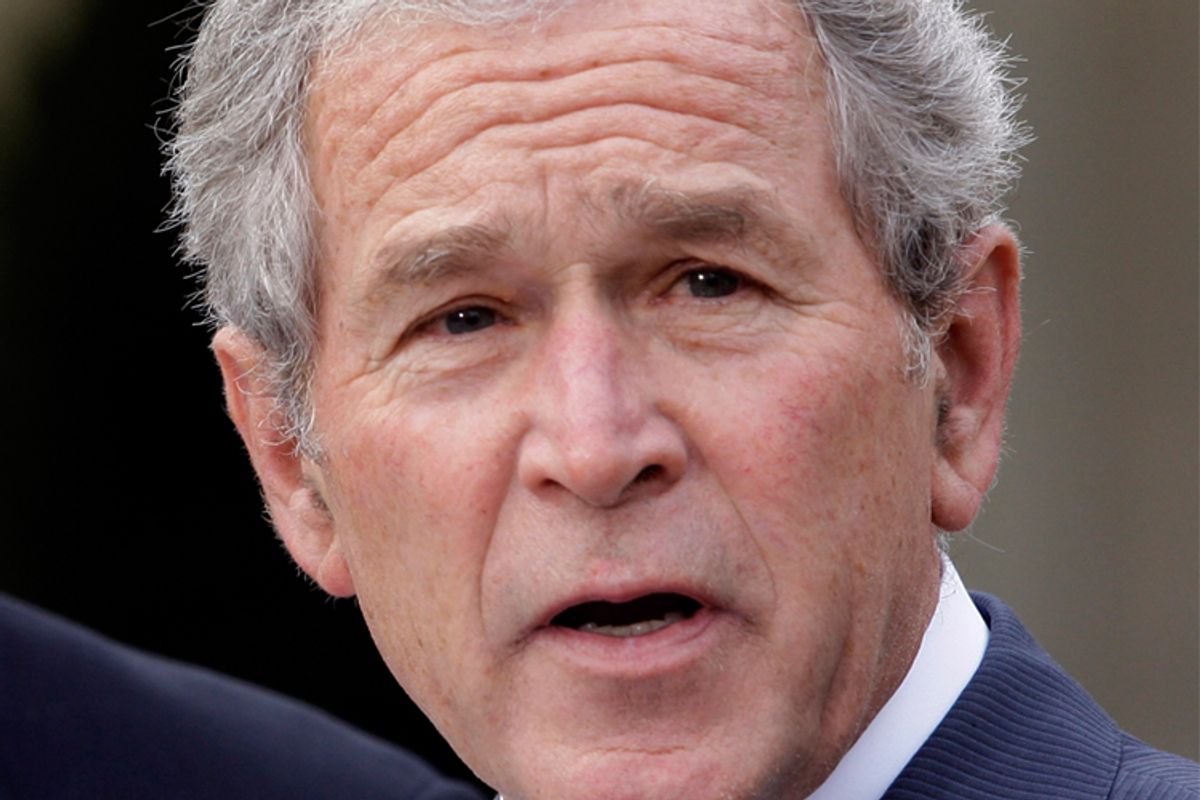 For Muslims around the world, George W. Bush and his decision to invade Iraq became symbols of Western arrogance, hostility and even religious supremacy. But neither Bush’s terrible foreign policy nor his personal and political connections with the religious right -- where bigotry against Muslims runs rampant -- prevented him from speaking out for religious tolerance and freedom on many occasions, especially in the aftermath of Sept. 11. He prided himself on that record, which had roots in his family's long relationship with the Saudi monarchy.

So why is the former president silent now, when a proposed community center and mosque in lower Manhattan have called forth such vitriol and prejudice from his supporters? Still popular among Republicans and conservatives (who are already seeking to rehabilitate him) Bush could speak out firmly on behalf of the First Amendment rights he has always claimed to uphold. If he were only to issue a statement saying he agrees with President Obama and Mayor Bloomberg that Muslims enjoy the same rights as other Americans -- without exception or qualification -- then people, especially his people, would have to listen.

Bush’s failure to utter a word so far in defense of principle is highlighted not only by his own past remarks on the same subject, but even more by the courage of his former aides Michael Gerson and Mark McKinnon.

In today’s Washington Post, ex-speechwriter Gerson eloquently expresses what we should have heard by now from his old boss:

No president, of any party or ideology, could tell millions of Americans that their sacred building desecrates American holy ground. This would understandably be taken as a presidential assault on the deepest beliefs of his fellow citizens. It would be an unprecedented act of sectarianism, alienating an entire faith tradition from the American experiment. If a church or synagogue can be built on a commercial street in Lower Manhattan, declaring a mosque off-limits would officially equate Islam with violence and terrorism. No president would consider making such a statement. And those commentators who urge the president to do so fundamentally misunderstand the presidency itself.

That is the essential constitutional issue, but Gerson goes on to make another salient point that Bush could emphasize with far greater effect. The mosque-baiting conservatives are advancing the interests of our enemies:

The militants hope, above all else, to provoke conflict between the West and Islam -- to graft their totalitarian political manias onto a broader movement of Muslim solidarity. America hopes to draw a line that isolates the politically violent and those who tolerate political violence -- creating solidarity with Muslim opponents and victims of radicalism.

How precisely is our cause served by treating the construction of a non-radical mosque in Lower Manhattan as the functional equivalent of defiling a grave? It assumes a civilizational conflict instead of defusing it. Symbolism is indeed important in the war against terrorism. But a mosque that rejects radicalism is not a symbol of the enemy's victory; it is a prerequisite for our own….

A president not only serves Muslim citizens, not only commands Muslims in the American military, but also leads a coalition that includes Iraqi and Afghan Muslims who risk death each day fighting Islamic radicalism at our side. How could he possibly tell them that their place of worship inherently symbolizes the triumph of terror?

How indeed? Yet that ugly, stigmatizing message is now central to right-wing Christian ideology and Republican political strategy, as one of Bush’s home-state senators smugly explained yesterday. If the former president meant any of the things he used to say about the meaning of liberty, he should be saying them again now -- and telling the demagogues in his party to shut up before they inflict permanent damage on America’s heritage, prestige and strategic interests.