The fear campaign and Social Security

This year's electoral tactic relies on distracting attention away from their record with -- boo! -- GOP threats 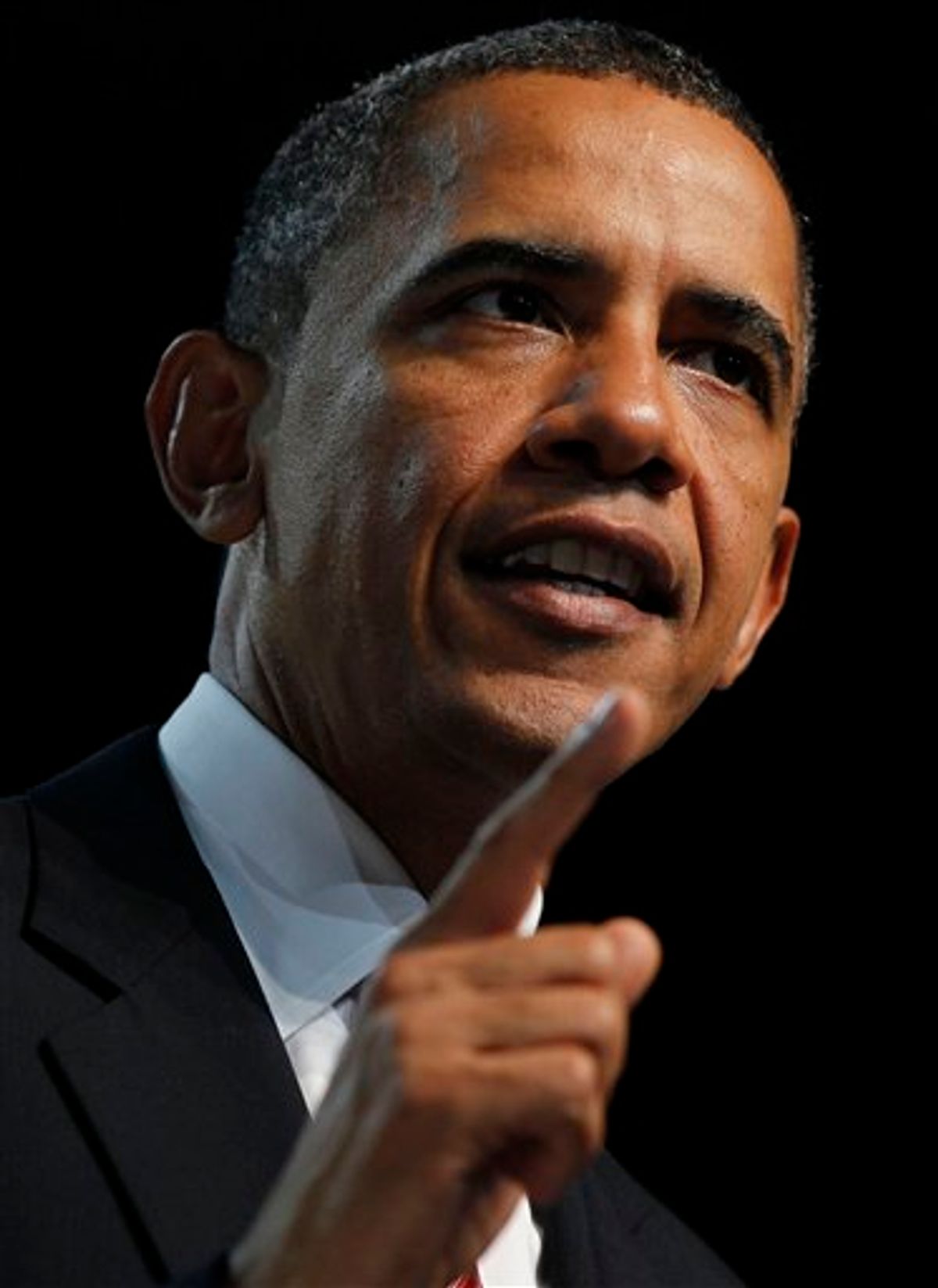 FILE - In this Aug. 2, 2010 file photo, President Barack Obama speaks about Iraq and Afghanistan at the Disabled American Veterans national convention in Atlanta. As the U.S. winds up combat operations in Iraq this month, a gap is widening between the militaries of both countries and their political masters over whether American soldiers should stay beyond the 2011 deadline for all of them to withdraw. It's the latest potential standoff as the uneasy allies each try to end the seven-year U.S. war without unraveling Iraq's still-precarious security. (AP Photo/Charles Dharapak, File) (AP)
--

President Barack Obama used the anniversary of Social Security to trumpet Democrats' support for the popular program and accuse Republicans of trying to destroy it.

Social Security turned 75 last week. . . . But the program is under attack, with some Democrats as well as nearly all Republicans joining the assault. Rumor has it that President Obama's deficit commission may call for deep benefit cuts, in particular a sharp rise in the retirement age.

It appears that the Democrats intend to try to win the midterm elections by scaring Americans into believeing that a GOP victory would endanger their Social Security benefits -- a tactic which Susie Madrak correctly condemns as "one of the most cynical political moves I've seen."  The reason for that characterization is obvious:  because, as Madrak explains, echoing Krugman:  "the imminent threat to Social Security right now is from the administration -- and its pet Catfood Commission."  Obama's speech this weekend focused on the GOP's plan to privatize Social Security, but that plan has zero chance of succeeding:  both because only a handful of Republicans (such as Paul Ryan) support it ever since Bush's privatization efforts were defeated, and because Obama retains veto power to prevent it even with a GOP victory this November.  The true threat to Social Security is Obama's Deficit Commission, which has inexcusably been working in total secrecy throughout the year, cooking up its recommendations to be released in December and likely to be voted on by Congress once the elections are nice and over with.

From the start, that Commission was stacked with people from both parties with a long history of advocating for serious cuts in benefits.  The Democratic co-Chair, Erskine Bowles, worked a decade ago with Newt Gingrich to try to privatize Social Security when he was Clinton's Chief of Staff, and in 1998, was hailed by Business Week as "Corporate America's Friend in the White House."  Other Obama appointees include David Cote, CEO of the defense contractor giant Honeywell, and several typical corporatist Democrats with histories of explicitly advocating for cutting Social Security (watch this short video with one of them, Alice Rivlin, showing the level of transparency and responsiveness with which the Commission is working).  Needless to say, all GOP appointees are also fully on board with Social Security cuts.

Some people (such as Matt Yglesias) hold out the not unreasonable hope that the Commission's recommendations will be unable to command majority approval in Congress because progressive Democrats will never vote for a plan that includes Social Security cuts, while Republican votes will never be secured if the proposal includes tax increases.  But the members of this Commission are old D.C. operatives who are not going to release a proposal which has no chance of being enacted.  They're well-aware of the need to secure Republican votes if it is to pass, and seem intent on securing the approval of GOP Minority Leader John Boehner and his caucus for the recommendations they issue.  That doesn't mean they can achieve that.  But given that progressive Democrats will never vote for Social Security cuts, the Commissioners are certainly aware of the need for Republican approval to combine with "centrist" Democrats (and the White House) as the only way to secure enactment, and will undoubtedly shape their recommendations accordingly.

Whatever one thinks of these plans to cut Social Security benefits, it's just appalling to watch the Democrats try to scare the electorate into voting for them on this basis given that it's Obama's Deficit Commission which, by design, is far and away the most likely threat to cut those benefits.  That raises the broader point that the Democrats are relying overwhelmingly on a fear-based campaign to win the election:  never mind all the bad things about us; don't worry about what we're doing with our power:  just look over at those scary, evil Republicans!!  This is how Rachel Maddow described the Democrats' midterm tactic last week, as she criticized Obama for continuing to fire gay members of the military rather than issue a moratorium on the policy until it's repealed:

And liberals, according to this White House, ought to be drug tested if we're expecting to see that from this White House right now. Stop complaining and be happy for what you have. . . .

It's hard to overstate how often one encounters exactly this mindset.  If you write about Obama's program to assassinate American citizens with no due process, or his horrific killings of civilians around the world, or his campaign-violating denials of due process, or the vast increase in the covert "shadow wars" the country is fighting with no oversight or checks, you'll invariably be met with this objection:  you should stop talking about these things so much because you're helping the GOP win!!! -- as though everything is just one big, continuous election and the things which the people who actually wield political power do with that power are irrelevant.  All that matters is doing and saying whatever is necessary -- even if you purport to be a commentator or "journalist" -- to ensure your party wins.  Or, as "journalist" Jonathan Alter put it last week: 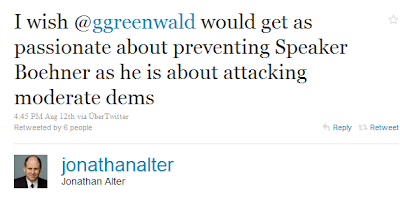 In other words:  devote yourself to the Real Goal -- saying and doing whatever is necessary to defeat the dastardly Republicans and keep Democrats in power -- rather than criticizing the political officials who . . . . actually hold power, decrees this "journalist."  It's the same reason there are so many blogs devoted to doing little else beyond railing against the latest moronic outbursts of Sarah Palin, or right-wing talk-radio hosts, or obscure GOP backbenchers even though they possess no control over the Government:  because Democratic apparatchiks want to ignore what Democrats are doing with the power they've been given and instead are relying upon exactly the fear-mongering tactic of distraction which Maddow described.  As she says, it's the same tactic Karl Rove used for years to gin up victories -- we may not be good but look over there at those awful, scary liberals -- and it's as common as it is effective.  This fear-based polarization perpetually keeps the electorate distracted away from what political leaders -- and the permanent factions which control the Government -- actually do.

It's certainly true that elections are about comparative choices, and it's obviously worthwhile and necessary to understand what the out-of-power party is and what they would do once in power.  But it's at least equally important -- I'd say more important -- to critique what the party that actually controls the government is doing with that control.  The fact that the Democratic electoral strategy depends upon distracting attention away from what they've done -- "make your base afraid of what the other side has to offer," as Maddow put it -- speaks volumes about that record.  It's long been repulsive to watch the Republicans try to win elections by scaring people into believe that it's Democrats -- rather than themselves -- responsible for the nation's fiscal woes, or posing threats to Medicare, or subverting the Constitution, or making the country "unsafe."  It's exactly the same watching Obama and the Democrats try to win the election by scaring people into believing that a GOP victory would threaten Social Security when the real threat comes from the Commission created by Obama to do exactly that.  And, whatever else is true, our political debates remained mired in little beyond distracting appeals to fear.

UPDATE:  Adam Serwer has more on the smug (and dubious) belief among some Democratic loyalists that the Party will hold onto power by managing to be less awful and scary than the Republicans.

UPDATE II:  Cenk Uygur was the guest-host today for Ed Schultz and questioned the Chair of the DCCC, Rep. Chris Van Hollen, about the Democrats' plans for Social Security.  Decide for yourself if you think Democrats are prepared to cut Social Security if/when the Deficit Commission recommends those cuts and the Congress is then required to give those recommendations an up-or-down vote without any amendments allowed: