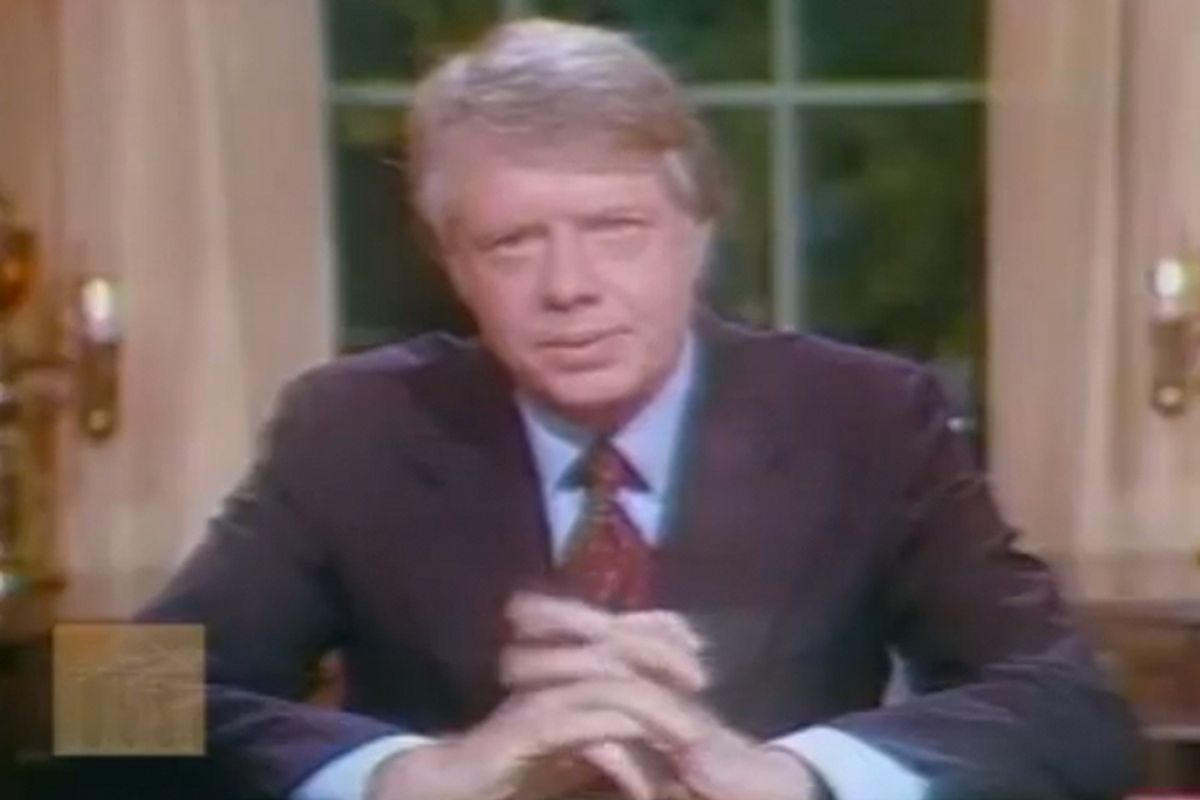 Let's get the big honking disclaimer out of the way first. As a callow 18-year-old, I cast my first vote for president of the United States in 1980 to reelect Jimmy Carter. While I can't claim to be have been a hugely enthusiastic supporter of the much-beleaguered president (he reinstated registration for the draft, for crying out loud!), there was no doubt in my mind that he was infinitely superior to that joke from California, a has-been actor who already had one foot inside a retirement home. I also was confident that Richard Nixon's disgrace would keep Republicans out of the White House for at least a couple more terms.

Needless to say, I was rather shocked at the outcome of that election, and have pondered its significance ever since. While I think Carter was largely doomed by factors that he had little direct control over -- the oil shocks and the hostage crisis -- I am willing to admit that he had his flaws and didn't leave much of an enduring legacy. He certainly wouldn't be on my list of the top 10 U.S. presidents.

But in what universe does he qualify as the Worst American of All Time? How does that work?

All weekend long, liberals have been goggling at a thoroughly unscientific poll of right-wing bloggers by the Right Wing News blog that purports to list the 25 worst Americans of all time -- the lowest of the low of "all the gangsters, serial killers, mass murderers, incompetent & crooked politicians, spies, traitors, and ultra left-wing kooks in all of American history."

By its very nature, a list such as this is all but useless as any kind of objective analysis of American history, but we can still glean some insights into the conservative mind from its preoccupations. At the top of the rankings: Jimmy Carter. No. 2: Barack Obama. 3. Franklin Delano Roosevelt.

Now, I could understand a right-wing biased list of American malefactors that started off with FDR. That would make ideological sense, since no other president accomplished as much in the way of building Big Government as Roosevelt. "That man" was dangerous! Even liberals feel uneasy at his attempts to pack the Supreme Court.

I could even understand, if not accept, a list that put Obama at the top. Considering the proportion of the electorate that believes our current president is an illegal immigrant Muslim socialist, you'd think he'd be in  first place by a mile! But even worse, for a generation reared on the Reagan Revolution, the spectacle of a president who actually managed to pass healthcare reform and reregulate the financial sector must be a fearsome thing indeed. (Kind of like seeing 2,000 German tanks massing just across your border.) FDR comes in third because memories are short as to what true policy effectiveness looks like.

But Jimmy Carter? Right-wing bloggers think Jimmy Carter is the worst American of all time? Are they purposefully trying to make themselves look ridiculous? How does a president who, all things considered, didn't achieve very much at all get ranked as more evil than the presidents who actually made a difference?

My Salon colleague Steve Kornacki believes that the ongoing conservative campaign to denigrate Carter is the flip side of the endless hagiography lavished on Ronald Reagan. Carter must be depicted as the worst of the worst in order to embellish the legend of the Gipper, who saved the nation from mediocrity and ushered in a brand-new day. Before morning can break, darkness must fall, in other words. In this construct, we have hostages taken during Carter's watch, but released within minutes of Reagan's accession. We have Carter giving the Panama Canal back to Panama, while Reagan obliterates Grenada. Carter ineffectually boycotts the Olympics while Reagan wins the Cold War.

There's definitely truth to this analysis, but it still doesn't quite explain the depth of animosity. So let's try another explanation.

We shouldn't underestimate the devastating economic impact of the oil shocks of 1973 and 1979 on the U.S. economy. More than any other single factor, the spike in oil prices derailed the great American economic locomotive and much of the damage was felt during the Carter administration. Carter saw it for the wakeup call it was and told the American people exactly what they needed to do. And he said some  mean things about our intrinsically American wasteful sloth.

But we do have a choice about how we will spend the next few years. Each American uses the energy equivalent of 60 barrels of oil per person each year. Ours is the most wasteful nation on earth. We waste more energy than we import. With about the same standard of living, we use twice as much energy per person as do other countries like Germany, Japan and Sweden.

One choice is to continue doing what we have been doing before. We can drift along for a few more years.

Our consumption of oil would keep going up every year. Our cars would continue to be too large and inefficient. Three-quarters of them would continue to carry only one person -- the driver -- while our public transportation system continues to decline.

Jimmy Carter's energy speech is dazzling in its prescience. If the country had followed the 10 principles he outlined in that speech (No. 10: "we must start now to develop the new, unconventional sources of energy we will rely on in the next century"), the United States would be in a far more secure position, economically and internationally, than it is now. Our dependence on Mideast Islamic nations would be greatly lessened. Our freedom of action in confronting the challenge of global warming would be dramatically strengthened. We would be spending less of our money on gas, burning less coal, and enjoying a much improved trade balance.

Carter, reviled for so long for his supposed mediocrity and ineffectuality, was right on the money on the single most important issue that links together American foreign policy, economic growth and the sustainability of a stable climate. With each year that passes, he becomes more right. The best explanation I can imagine for explaining why conservatives think he is the worst American of all time is that the challenge of dealing with that paradox has driven them all utterly insane.