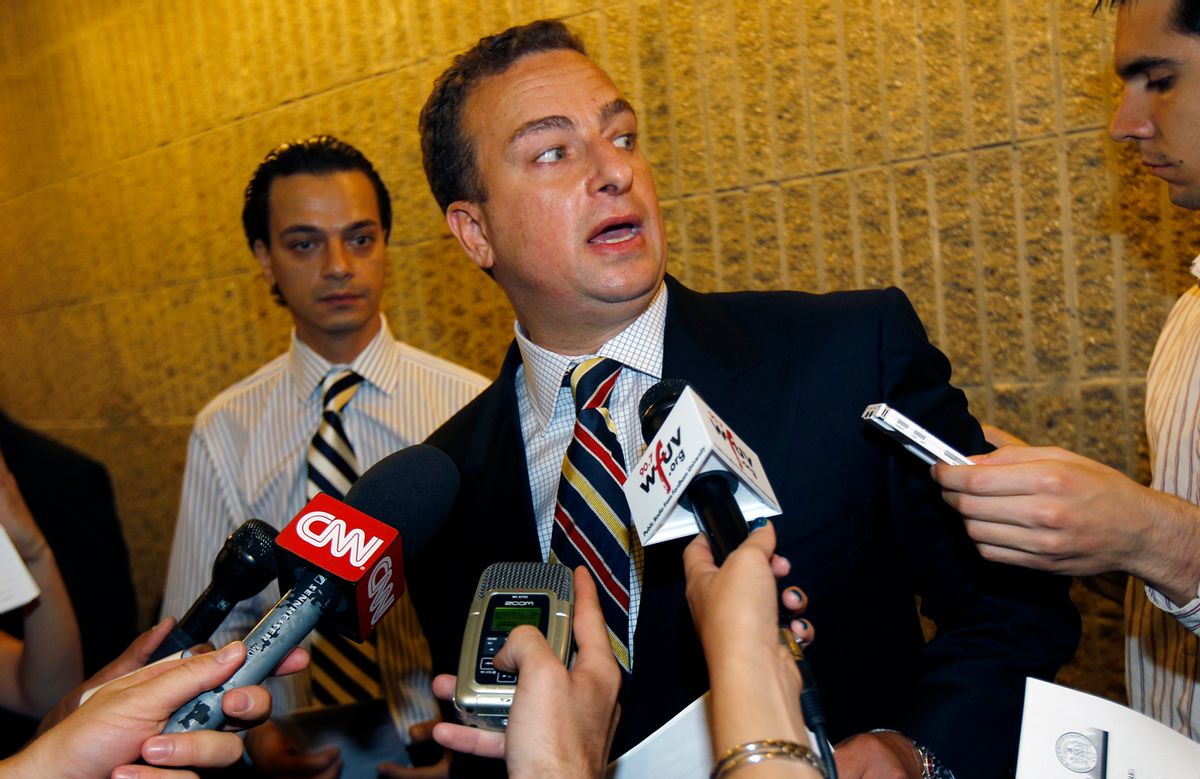 Sharif El-Gamal, owner of 45 Park Place, a building in lower Manhattan, speaks to members of the press after a meeting of the New York City Landmarks Commission in New York, August 3, 2010. The City agency denied "landmark" status for an old building near the site of the September 11 attacks, clearing the way for the building to be torn down to make room for a Muslim cultural center which has spurred heated debate. REUTERS/Mike Segar (UNITED STATES) (Â© Mike Segar / Reuters)
--

The toxic right-wing campaign to impose a Muslim-free zone around Ground Zero intensified today, while Democrats -- following in the cowardly footsteps of Senate Majority "Leader" Harry Reid, whose book is one of the most ironically titled in history -- ran faster and faster away from the controversy.  New York Governor David Paterson made it known that he wants to meet with Park 51's developers to encourage them to move to a new site.  One Democratic official, Rep. Michael Arcuri of New York, actually attacked his GOP challenger, Richard Hanna, for having bravely broken with his own party to support the project; Arcuri's Gingrich-replicating attacks caused Hannah, one of the few Republicans in the nation to have defended Park 51, to reverse position by arguing today that it should move.  And it is hard to imagine anyone surpassing Rep. Anthony Weiner in the cowardice department after the unbelievably vapid, incoherent letter he issued, ostensibly setting forth his views on this matter (stringing together words randomly chosen from the dictionary would likely create more meaningful sentences than the ones Weiner wrote).

Aside from Michael Bloomberg's impassioned, principled speech in defense of Park 51 -- and, if one wants to be generous about it, Barack Obama's initial, voluntary defense of the religious freedom values at stake -- there have been very few commendable acts in this dispute.  Until now.

The developer of the project, Sharif El-Gamal, gave his first interview this afternoon, with NY 1, and categorically refused even to consider backing down.  He made clear that Park 51 has the absolute constitutional right to build a community center in Lower Manhattan, and refused even to acknowledge the toxic notion that Muslims generally somehow bear responsibility for the 9/11 attack.  Refusing to be bullied in the face of an ugly, national, majoritarian onslaught, egged on by a wide array of national leaders exploiting the most base impulses of the population, is the true definition of political courage.   Let's hope they maintain their resolve.  Their insisting on the free, unfettered exercise of their core liberties strengthens those rights for everyone; conversely, their stern rejection of the bigoted premises at the heart of this campaign makes it less likely that those premises will succeed the next time they are invoked.  The interview with El-Gamal, well worth watching, is here.

(1) Park 51 opponents have made much of the fact that polls show majority support for their view, as though public opinion should dictate where religious minorities can congregate.  A new poll today reveals that 62% of Americans -- a record high -- now oppose the war in Afghanistan.  By the reasoning of project opponents, shouldn't that mean that public opinion should be honored with a withdrawal from that country?  After all, religious freedoms are not supposed to be dependent upon the approval of majorities; the whole point of such liberties is to protect minorities from majoritarian frenzies.  By contrast, wars are actually supposed to be fought only with the support of the citizenry.  If majority sentiment should prevail, a far more compelling case can be made that it should do so with regard to Afghanistan than with the religious liberties of a minority group.

(2) The interview with El-Gamal highlights how often these "national debates" are conducted with very little inclusion of any actual Muslims.  Just as is true of the people in the countries we invade and occupy, American media outlets spend a great deal of time talking about Muslims, but very little time hearing from them -- including, perhaps especially, American Muslims.

(3) I have a contribution for The New York Times on these issues which should be posted later today.  I will post the link when it is available.

UPDATE:  Three more Democratic members of the New York Congressional delegation today follow in Reid's cowardly footsteps, arguing that Park 51 should move to a different locale.  The greatest political myth in America -- after "The Liberal Media" -- may very well be the supposed lack of bipartisanship.

UPDATE III:  My New York Times contribution on these matters is here.