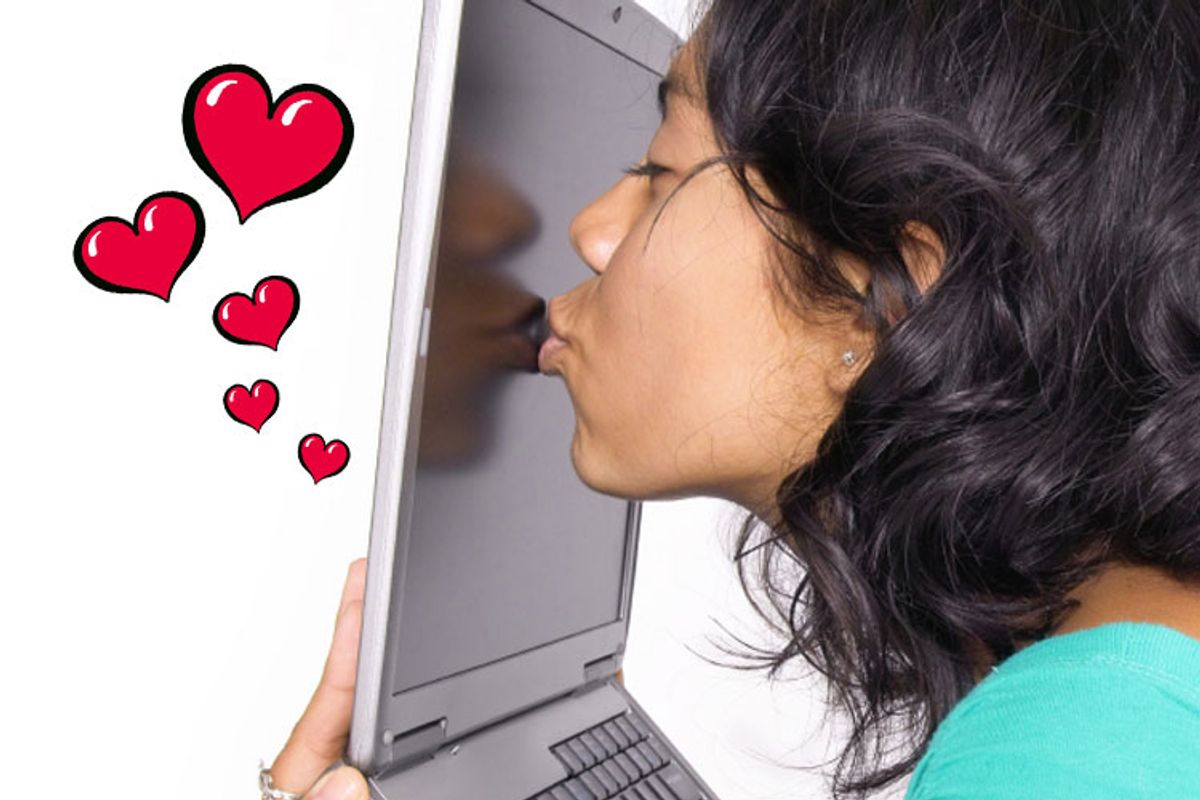 Whatever will the Hollywood rom-com industry do now that the meet-cute is all but a thing of the past? This week, a new study out of Stanford with the super-romantic title "Meeting Online: The Rise of the Internet as a Social Intermediary" revealed that adults who have Internet access are considerably more likely to be in a relationship than those poor, isolated never-getting-laid-again souls without it, and further predicted that "in the next several years the Internet could eclipse friends as the most influential way Americans meet their romantic partners." That's right -- the Internet is now responsible for more relationships than even "The Bachelor."

Perhaps predictably, the Net still plays a bigger role for people who often have to work harder to meet potential mates – the gay and lesbian community. According to the "How Couples Meet and Stay Together Survey" conducted for the paper, a whopping 61 percent of gay couples met online, compared with 21 percent of straight ones. Also better-represented: the middle-aged, and couples of different religious backgrounds.

And so, this Monday, just in time for the news that none of us ever need leave love to fate or happy hour at Houlihan's again, eHarmony – which famously refused gay-romance seekers until settling a lawsuit earlier this year -- celebrates its 10th anniversary with a new campaign of romantic promos directed by documentary great Errol Morris. Take a nostalgic moment to remember the time before eHarmony, OKCupid, Match.com, the Salon personals and whatever weird fetish service you belong to existed, when the idea of actively shopping around for love -- or something considerably more casual -- on the Internet still carried the taint of desperation, the implication of, "What, you can't just go out and meet people, you social leper?" But, then again, there was probably a time you didn't think you'd be watching "Braveheart" on your phone either. Welcome to the future!

It's a sign of the times that the new eHarmony campaign doesn't explain what the service does, focusing instead on playful images of real couples romping in "I found the one!" bliss, while an unseen narrator zeroes right in on the money question to ask, "What if you had your last bad date?" (Cue sound of a million wallets busting out credit cards.) As ad co-creator Lucas Donat explains to the New York Times, "People don’t want to be sold to anymore."

And yet, what is dating itself but one big sales job? With online dating, it's almost too easy to be both the shopper and the goods. As Lori Gottlieb pointed out in "Marry Him," online dating can turn into a "you might also enjoy" comparison shopping experience, complete with a neatly presented array of attractive prospects. It's like Benetton for booty! Click, click, click, add to cart. Try this one on, take that one back.

What's good about both the Stanford study and the durability of even not-so-cool sites like eHarmony is that being proactive about connection is no longer viewed as unromantic or loserish. Somewhere along the line, enough friends and friends-of-friends started meeting cool people and even falling in love to make the "Let's just say we met at the deli" cover story moot.

But as eHarmony's new campaign makes clear, love -- or even a really good hookup -- isn't always a simple matter of what matches up perfectly on a survey. "What if you were loved for you?" it asks. What if? What if we had a way of finding people who share our interests and like our pictures, so we could be out dancing instead of  sitting at home lonely? And what if, along with all the practicality and purposefulness and monthly fees the Internet brings, it turns out we still hope, in our hearts, for something approaching magic?