At 75, America's most successful social program is in better health than economic conservatism 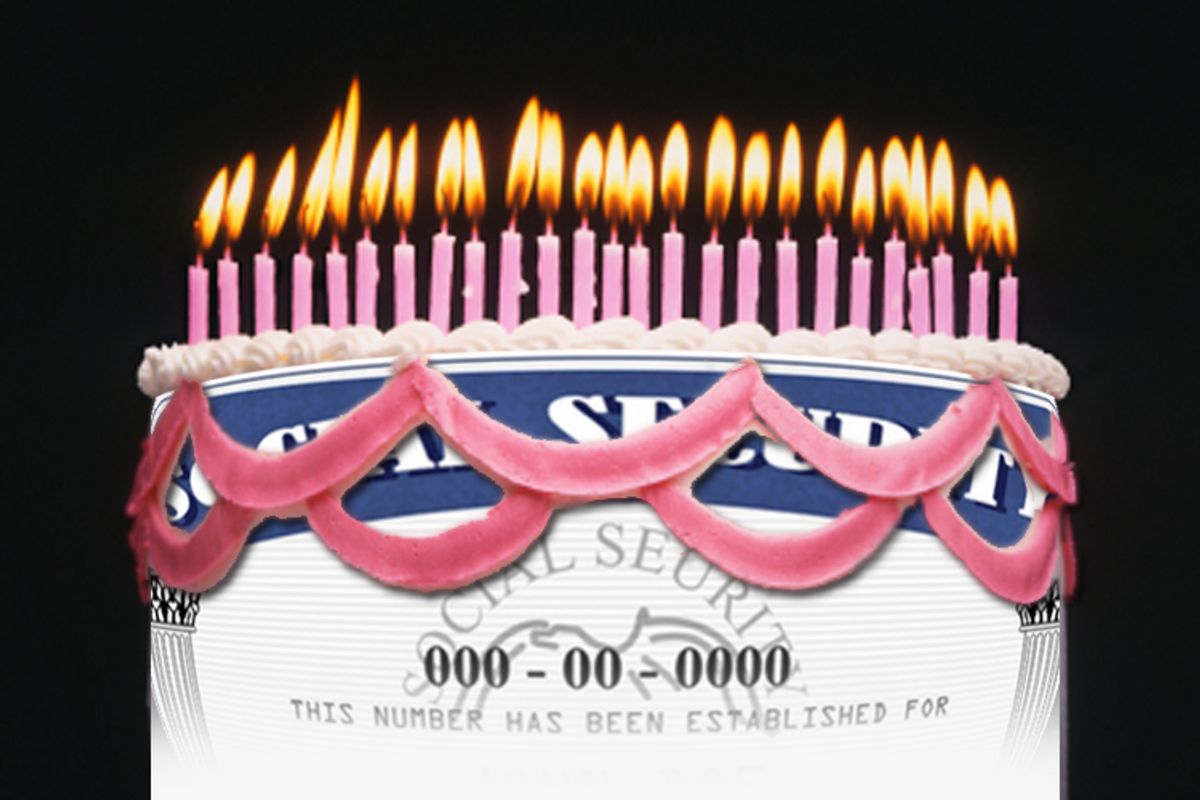 On Saturday, Aug. 14, Social Security celebrated its 75th birthday. For three-quarters of a century, America’s most successful social program, signed into law by President Franklin Delano Roosevelt during the depths of the Depression, has helped Americans in multiple ways.

By providing a guaranteed income to all Americans in retirement, Social Security has made utter destitution among the elderly all but forgotten, like the poorhouses for the old that 21st-century Americans know only from history books. By lessening the burden of caring for their aged parents, Social Security has freed American families to invest more in their children.

Social Security has important macroeconomic functions as well. During economic downturns like today’s Great Recession, it acts as an automatic stabilizer, slowing the collapse of aggregate demand. And in good times as well as bad, by contributing to the purchasing power of the elderly, Social Security helps to maintain the mass consumption on which a modern industrial economy depends.

Social Security’s contributions to deficits in the future are minor and easily corrected. The main long-term threat to the economy comes from healthcare costs, private and public, which are much higher in the U.S. than in other industrial democracies. The solution is all-payer cost control -- setting medical prices by negotiation between the government and providers. This will require the elected representatives of the American people to end the gouging of American businesses and consumers by greedy pharmaceutical companies and hospitals and overpaid doctors. The only other alternative to national bankruptcy is rationing, which would force Americans to receive less healthcare at excessive prices, instead of the same amount of healthcare at lower prices comparable to those in Canada, Europe and Japan.

If the predatory American medical industry is ultimately broken and tamed, then the so-called entitlement crisis played up by Democratic deficit hawks like Erskine Bowles and Alice Rivlin and right-wing Republicans like Pete Peterson and David Walker and Alan Simpson will shrink to manageable proportions. According to former Republican head of the Congressional Budget Office Douglas Holtz-Eakin, if medical prices grow no faster than the economy, then by the mid-21st century the aging of the population alone will require us to raise only an additional 2 percent of GDP for Social Security and another 2 percent or so for Medicare. Because the U.S. spends so much less on transfer payments than other industrial democracies, the U.S. can make these minor adjustments and still spend less on government than other successful capitalist nations.

Social Security’s modest shortfall in the next half-century can be reduced by raising the cap on wage income that is covered by the Social Security payroll tax -- or eliminated by getting rid of the cap altogether. According to polls, most Americans prefer raising taxes on high-income Americans to raising the retirement income and cutting Social Security benefits for the majority. The American people are right and they should get their way.

Economic conservatism was born in Britain, the offspring of Herbert Spencer, the theorist of Social Darwinism, which actually was antisocial and not Darwinist. Brought to America in infancy, economic conservatism was adopted by plutocrats like Andrew Carnegie and raised by the rich, who continue to be the chief audience of what is now an elderly and enfeebled doctrine.

Herbert Spencer believed that markets promoted "the survival of the fittest," a phrase he coined. The patron saint of free-market libertarians opposed even public sewage systems and public libraries. Even conservative politicians in modern democracies have repudiated this kind of market fundamentalism. Ronald Reagan refused to propose cuts in Social Security, and proposed to nationalize Medicaid. When George W. Bush pushed for diverting some Social Security payroll taxes into the casino of the stock market, the idea was so unpopular that a Congress controlled by Republicans refused even to debate it. Meanwhile, Bush and the Republican Congress, by enacting the Medicare drug benefit, created the first new healthcare entitlement since LBJ passed Medicare and Medicaid in the 1960s.

Economic conservatism thus has good reason to be bitter while brooding in the nursing home, cursing Keynes and Roosevelt in a 19th-century British accent while propped up on pillows beneath the signed pictures of Herbert Spencer, Andrew Mellon and Milton Friedman. During election-year campaigns, conservative politicians wheel out the aged doctrine and promise that, cross their hearts, when elected they will abolish Social Security and privatize Medicare. But once they are in office, Republicans forget about their old friend until the next election cycle, although they may send signed cards to the nursing home during the holidays.

One thing is certain. Economic conservatism will be dead and buried on Aug. 14, 2035, when a grateful America celebrates the 100th anniversary of the Social Security program, which even then will be many years from retirement.