Why Catholics should thank anti-Catholic bigots

Who knew I owe my freedom to Nativists who killed Irish Catholics! The "ground zero mosque" debate gets uglier 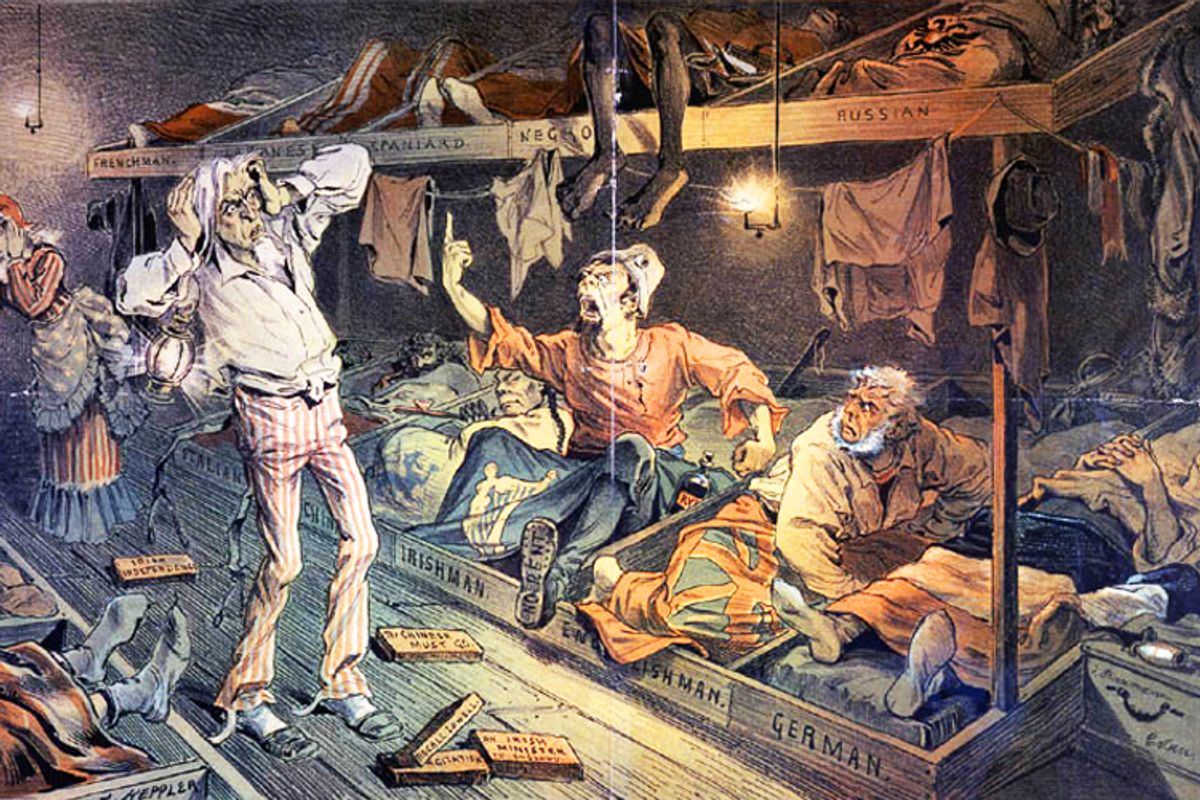 I would like to thank New York Times columnist Ross Douthat, on behalf of my Irish Catholic relatives; indeed, on behalf of all Irish Catholics, including the Kennedy family, for reminding us of the debt we owe to anti-Catholic "Nativists." Yes, even though I was raised to believe the Nativists spread anti-Catholic prejudice and bigotry with lies about who we were and what we believed, Douthat says I was raised wrong (not surprising, given I was raised by Irish Catholics). In fact, Catholics like my family and the Kennedys should apparently thank the Nativists, because, as Douthat patiently explains, "Nativist concerns about Catholicism’s illiberal tendencies inspired American Catholics to prod their church toward a recognition of the virtues of democracy, making it possible for generations of immigrants to feel unambiguously Catholic and American."

Got that? Until today, I had always thought the belief that Catholics couldn't be "unambiguously Catholic and American," or that the Catholic Church had "illiberal tendencies," represented prejudice, the kind of prejudice that collided with and eventually gave way to American ideals about equality and religious freedom. I didn't realize my people had to be "inspired" into fully embracing "the virtues of democracy" by Nativists, often by violence: from Charlestown, Mass, where Nativists burned a Catholic convent in 1834, to Philadelphia in 1844 (where thousands of Nativists attacked Irish Catholics, derided as "scum unloaded on American wharfs," burned Catholic churches and convents, invaded the homes of Irish Catholics and beat residents), to St. Louis, where a Nativist riot against Irish Catholics killed 10 and destroyed 93 Irish Catholic homes and businesses, or Louisville, Ky., where Nativist mobs killed at least two dozen Catholics on "Bloody Monday," Aug. 6, 1855.

I'm glad all that violence convinced Irish Catholics to stop being dirty, superstitious, lazy, drunken, anti-American Papists -- the Nativist line on my people; the Pope was considered as anti-American as Osama bin Laden back in the day -- so we'd one day deserve to enjoy the religious and political rights other Americans did. I was raised to believe the election of John F. Kennedy as our first Catholic president represented the triumph of American values of tolerance and inclusion over bigotry. But in Douthat's bizarro-world version of American history, bigots help their victims, by making them deserve bigotry a little bit less. Is this a great country, or what? Or is Douthat's argument a little bit like saying African-Americans owe a debt to the KKK, or Jews should thank Nazis?

Not surprisingly, Douthat made his astonishingly ignorant remarks in a column defending prejudice against the so-called "ground zero mosque," which, again, isn't a mosque, and isn't at ground zero. The controversy, ginned up by Republican opportunists and kept alive by cowardly Democrats (thanks, Harry Reid!) is bringing out the "Know-Nothings" in American politics again -- and I mean that in both senses of the word. The Know-Nothings were the violent Nativists of the mid-19th century who got their name from their vow to tell police they "know nothing," if questioned about their foul anti-immigrant conspiracy. Our latter-day Know-Nothings are both peddling prejudice and propagating ignorance toward the Park51 Community Center, proving they indeed know nothing about what makes this country great. In fact, I'd call them un-American, if I'd been raised like Liz Cheney, but I was taught to believe we're all Americans, even when we disagree.

I'm proud of the work of Salon writers on this issue, so I don't have to dispel all the ignorance afoot with this one piece. If you read one thing about this issue, make it Justin Elliott's tick-tock of the way anti-Islam blogger Pamela Zeller and Rupert Murdoch's New York Post manufactured a controversy where there wasn't one. (Proof this is a fake issue: Substituting for Bill O'Reilly last December, Fox personality Laura Ingraham praised the project in an interview with the wife of Imam Feisal Abdul Rauf, Daisy Kahn, telling her, "I like what you're trying to do.") Just a quick digest of the worst lies: It's not a "ground zero mosque," it's a Muslim community center with a prayer room two blocks from ground zero; there's another mosque two blocks away; it's not, as the blowhard Newt Gingrich says, "like the Japanese putting up a site next to Pearl Harbor." We're not at war with Islam, we're at war with al-Qaida. Muslims died on 9/11, and have died since in the American military, defending our country against al-Qaida since.

It made me sad to debate Republican strategist John Feehery about this issue on "Hardball," because Irish Catholics should know their own history, and the way prejudice was used to oppress their ancestors and limit their opportunities. Wait, "limit their opportunities" is kind of  wishy-washy language; the way prejudice was used to defend murdering Irish Catholics and burning down their homes, businesses and places of worship. Douthat ends his deeply dishonest column suggesting Muslims "need leaders whose antennas are sensitive enough to recognize that the quest for inter-religious dialogue is ill served by throwing up a high-profile mosque two blocks from the site of a mass murder committed in the name of Islam." Feehery made a similar point on "Hardball."

The fact is, Irish Catholics had leaders who were "sensitive enough" to urge their people to try to mollify their enemies. In Philadelphia in 1844, Bishop Francis Kenrick closed all Catholic churches the Sunday after the first Nativist attacks, and told Irish Catholics to trust the government and forgo efforts to defend themselves. Of course the anti-Catholic rioting continued, and no Nativist was ever convicted or punished for it. (In fact, Irish Catholics who defended themselves were sent to jail, and the grand jury blamed the community's ignorance and bad behavior for the attacks on them.) I asked Feehery if he would have urged his grandparents or great-grandparents not to build churches where people held anti-Irish Catholic prejudices; not surprisingly, he didn't answer.

The exact same principles -- and the same sort of prejudice -- are involved in the case of the Park51 Community Center. I'm grateful to Douthat for reminding me of that, and I hope other people wake up.