The 19th amendment turns 90 despite the haters

Women won the right to vote in 1920. No thanks to President Taft or thousands of self-hating ladies 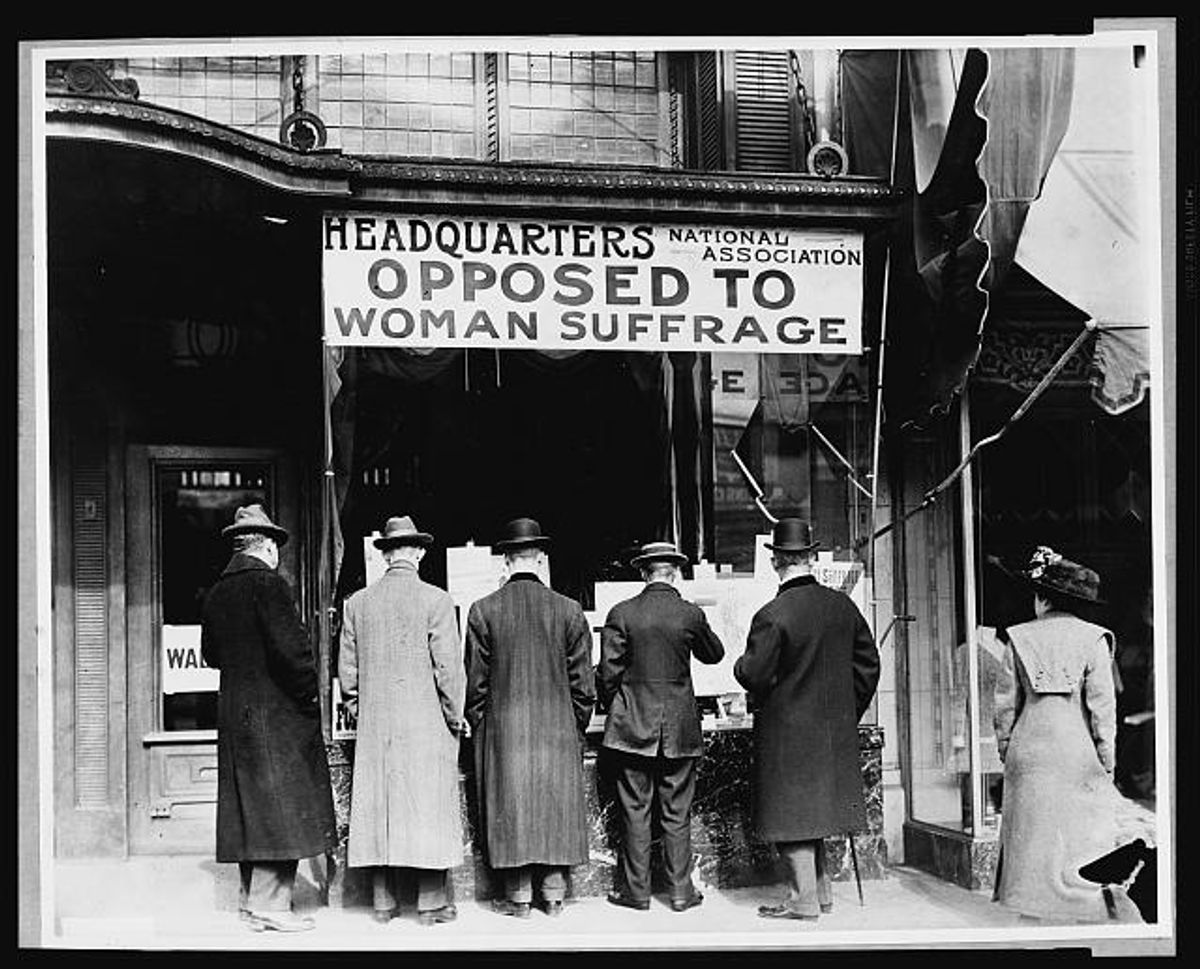 Men looking in the window of the National Anti-Suffrage Association headquarters circa 1911.
--

Today we herald the 90th anniversary of our right to vote, ladies, and with that comes a modicum of responsibility. With great power, yadda yadda yadda.

American women tend to take a great deal for granted: We can work, own land, drive our own cars (alone), walk the streets with our arms and legs on display and get pregnant without relying on the presence of a penis (sorry, Bill O'Reilly). All of these inalienable rights have set us apart from present-day women in hundreds of countries. We can cheat on our spouses without being stoned to death. We can express heteroflexibility more readily than men. We can lie, cheat, steal and maim our way to the top of the corporate ladder. Just like boys!

So, a history lesson:

Given the rampant misogyny the suffrage movement was facing, from men and self-hating female anti-suffragists alike, their work cannot be undervalued. President William Howard Taft opposed the idea of women voting because of our tendency to go bat-shit crazy: "It is fair to say the immediate enfranchisement of women will increase the proportion of the hysterical element of the electorate." I'll show him hysterical.

The suffrage and civil rights movements are inexorably linked, too. When the original Susan B. Anthony amendment was being debated in the Senate in September 1918, Sen. John Sharp Williams of Mississippi tried to block a vote by stipulating that suffrage be limited to white women only, which was supported by Sen. Thomas Hardwick of Georgia: "With all due deference to the men of the North, I say you do not quite understand what it means when you vote to give the franchise to the Negro."

Ironically enough, when Hardwick went on to be governor of Georgia, he appointed the first female to serve in the Senate (if only for one day), Rebecca Latimer Felton. Just to show you how back-asswards politics used to be (or has become), Hardwick was a Democrat. A senator from the now-typically blue state of Connecticut was staunchly against women voting, too.

Mara Mayor wrote a book called "Fears and Fantasies of the Anti-Suffragists" in 1974 that included examples of anti-equality hype that are real doozies:

"Allowing women to vote would lead to foreign aggression and war." Like WWII? Vietnam? Tupac vs. Biggie?

"Their [women's] delicate emotional equilibrium could easily be upset by a strain -- like voting."

"Woman suffrage would produce a nation of transvestites."

That last one could technically be called true, since we wear pants, not hoop skirts, but fob watches have yet to catch on.

Leftist women couldn't be counted on to support their sisters' cause, either. The anarchist intellectual Emma Goldman thought the fight for suffrage was beside the point -- women should fight for revolution instead of trying to gain ground in an already screwed-up system. "Woman does not see…that suffrage is an evil, that it has only helped to enslave people, that it has but closed their eyes that they may not see how craftily they were made to submit."

The fight was won, no matter how many men and women thought they were trying to protect the home and hearth and spirit of womanhood by keeping us out of the political process. We need to remember, today of all days, how lucky we are that we get to complain and raise hell and actively participate in our democracy, even if our democracy serves up despicable choices sometimes.