Focaccia: Easier than expected, tastier than you knew

Light-textured, shiny with olive oil, and creamy-flavored, this complex bread only seems complicated to make 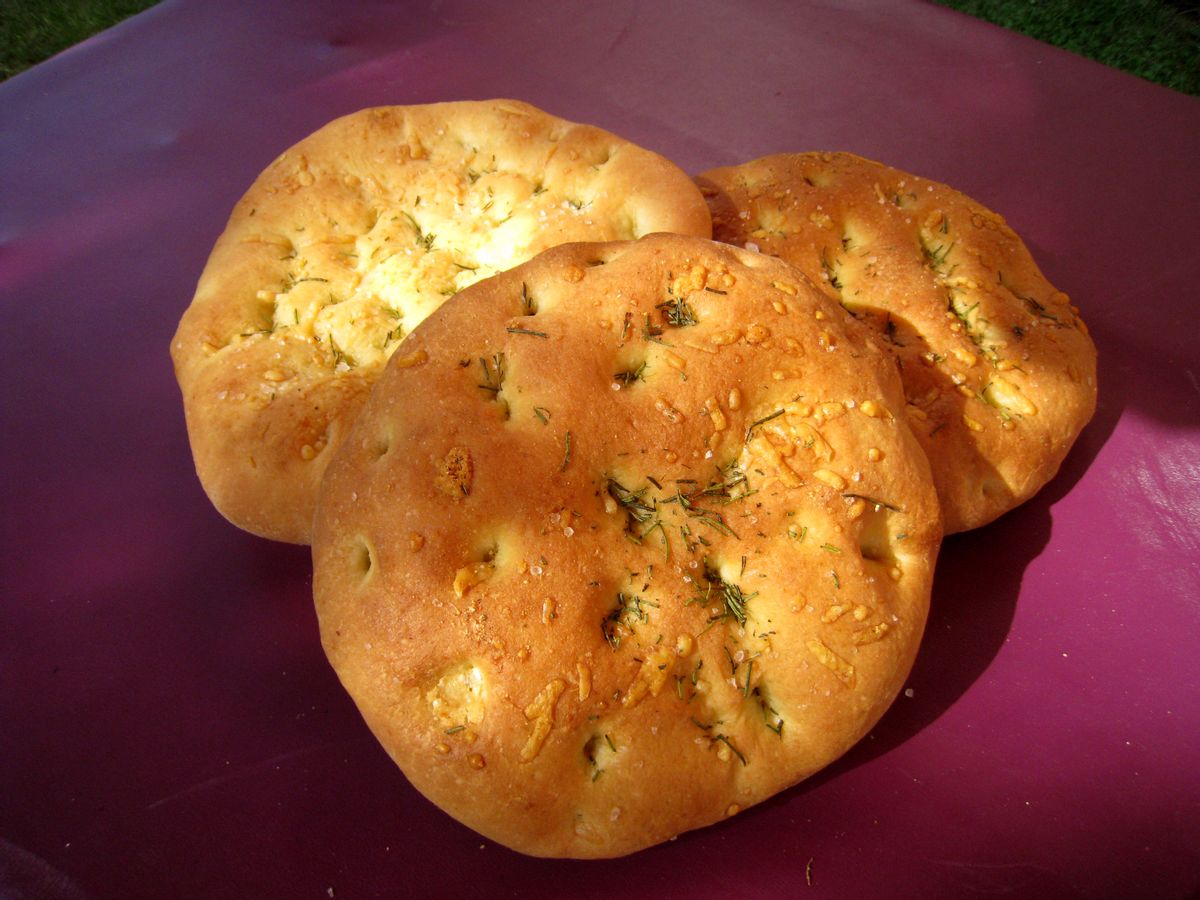 Updated: Poolish recipe updated to balance weights of flour and water, for aesthetic and poetic reasons. Also, pound-to-ounce conversions are now done for you.

OK, so it's not true that I've never baked before. Despite my fears, I've tried at various points to exorcise myself of my dough timidity, and once even scaled the Great Focaccia Mountain and turned out a few decent rounds. They had all the things you'd want in focaccia -- a tender, light crumb, a thin pliant crust that crisped with a nudge in the toaster, and a rich flavor of olive oil. It was great, exciting and ... totally lost to me after I made it, because I only did it once and tried to sneak away while I was batting 1.000.

But in baking school, kneading my way through literally dozens of loaves of bread, I felt myself growing more comfortable with doughs of all sorts, increasing in difficulty from the 1-2-and-done loaves of Irish brown soda bread to the tough-but-fair mass of bagels to incredibly sticky, challenging gloops that wanted to glue themselves to my hands, my workbench, my neighbor's hair. Midway through Day 3, by the time we got to the school's quick, straightforward recipe for focaccia, it felt like a vacation. It turns out that my Great Focaccia Mountain is actually more like a quaint little hill, but who says things need to be hard to be great?

The version of focaccia I'll share below is every bit as good as the one I described above, but even better, with a complex addition of a mild, creamy tang, a gift from nature. This bread starts with a poolish, aka the evocatively named liquid sponge, a delicious but mannered yeast-and-bacteria colony that's the midway point between just using straight yeast in your dough and going all-out with a sourdough starter.

What's a poolish? What's a liquid sponge? Two terms for the same thing, a poolish is essentially a light, young version of a sourdough starter that's used to leaven a dough after it's developed a little bit of flavor but before it starts to get really sour and funky. After 8 hours to a day or so, a poolish gets a milky, buttery characteristic, the result of the friendly bacteria producing lactic acid. I opened my container of the stuff and the aroma was, I thought, of yogurt and almonds. Others in the class thought it smelled like baby spit. I guess I couldn't disagree, but it tastes great once you bake it!

Use spring water for your starters and doughs, or do it the cheap way -- dechlorinate it: Lots of municipal systems spike their water with a little bit of chlorine to kill microorganisms. I'm anti-tummy ache, so I think this is generally a good thing, but it unfortunately also kills many of the yeasts and bacteria we're trying to cultivate in our starters and doughs. So when making any yeasted bread, spring water is an aristocratic choice. Or simply fill a bowl with the water you need for your recipe and let it sit, uncovered, for about three hours; the chlorine will naturally evaporate out. Note that water filters won't remove the chlorine, and avoid distilled or reverse osmosis waters, because they have literally no flavor.

Weight vs. volume: This is sort of an age-old battle in recipe writing -- do you give ingredient measurements in cups and pints or do you give them by weights? The reason is that density varies; if your flour has been sitting untouched for weeks and mine is constantly getting fluffed up from my dipping into it, a cup of your flour will weigh more, probably, than my own. Usually, you can assume certain averages (about 5 ounces -- or .32 pounds -- for a cup of all-purpose flour, for example), but in baking precision really matters, especially if you're making larger batches. (A slight difference in one cup, but multiplied several times, starts to really make a difference.) Weights, however, don't change -- a pound is a pound, a gram is a gram. So while in the past few recipes I've given volumes for convenience's sake, I'll start here with weights as well. And buy a scale! They're cheap and totally worth it.

One way to check if you're done kneading -- the windowpane test: Mixing and kneading bread dough in a KitchenAid-type mixer is convenient, but offers the danger of overkneading, which makes the loaf dense and tough. You really don't have to worry about that when doing it by hand (and I enjoy the physicality of it), but then you have to think about underkneading. (It's better to underknead than over, if you have to choose.) In a somewhat firm, pleasant dough like this, you can check on your progress with the windowpane test. Using the thumbs and forefingers of both hands, gently pinch and tug a few inches of dough out of the mass. With your middle fingers, gently tap on the flap you're stretching. Do you feel a tautness, like a drumhead? Does the dough let you stretch it without snapping or tearing right away? It will eventually rip, but if you get some tension in there before it does so while you manipulate it gently, that's a good sign. And certain doughs will actually stretch to the point of being somewhat see-through, hence the name of this test.