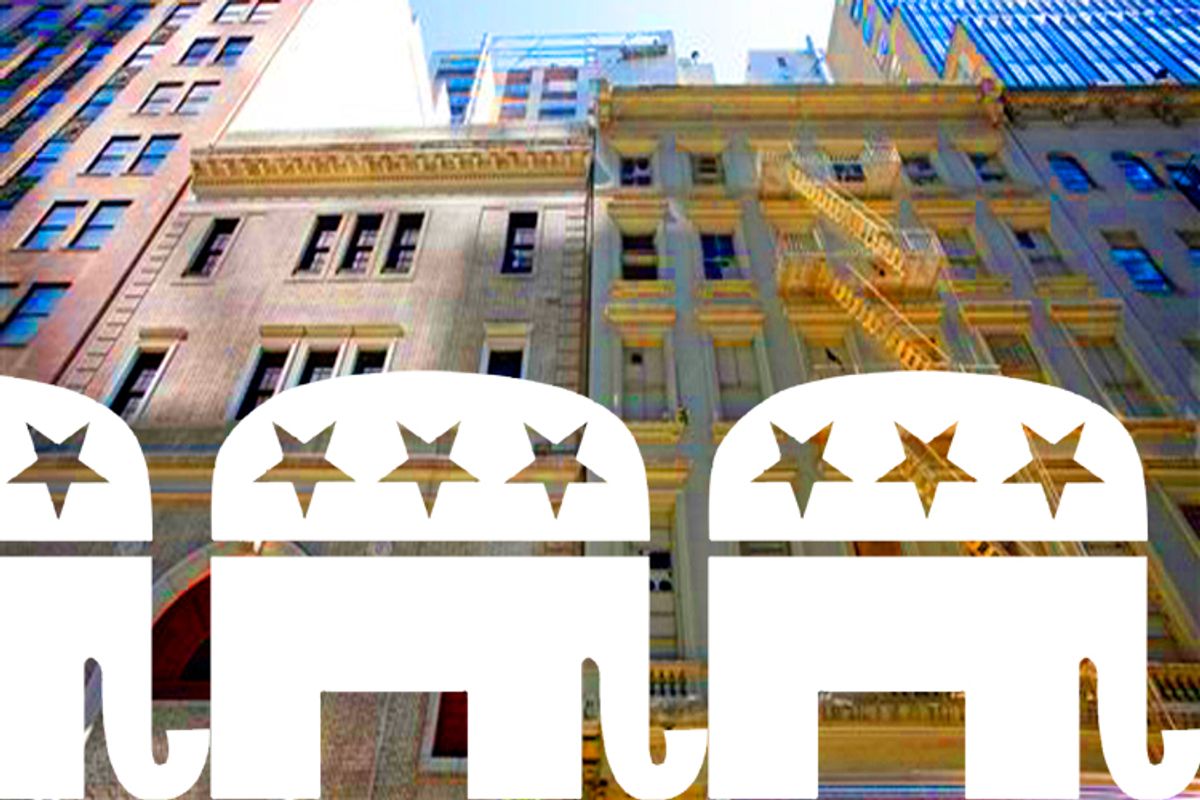 The site of a planned mosque is shown two blocks from the World Trade Center, Friday, Aug. 13, 2010 in New York. President Barack Obama on Friday will speak up for religious freedom at a dinner celebrating the Islamic holy month of Ramadan, emphasizing that point just as New York City is immersed in a deeply sensitive debate about whether a mosque should be built near ground zero. (AP Photo/Mark Lennihan) (Mark Lennihan)
--

The Washington Post's Ezra Klein wrote yesterday that the GOP's embrace of the "ground zero mosque" issue threatens to complicate a political environment that until now has been quite favorable for the party.

"Republicans are going to win a lot of seats this year," he wrote. "And they're going to do it on the backs of the economy. Getting into social issues -- particularly social issues that might anger minorities -- is a dangerous play. It loses them long-term votes that they just don't need to lose. It paints their party as intolerant and opportunistic. And it's unnecessary: It's not like they're hurting for things to talk about."

I wish this were true, but I don't think it is.

Perhaps the saddest aspect of the entire Park51 episode is that the right's fear campaign actually seems to be good politics. As last week's CNN poll showed, fully 68 percent of Americans say they oppose the project -- including 70 percent of independents and 54 percent of Democrats. I know, this doesn't mean that all of these people agree with or are entirely comfortable with the uglier rhetoric coming from the right, but the numbers are a clear and stark reminder of how emotional this topic is to most Americans: Faced with headlines about a mosque being built near ground zero, their response is not to celebrate their country's commitment to religious freedom and pluralism or to be soothed by mitigating context (like the fact that there are already mosques -- and strip clubs! -- nearby) -- it is to shake their heads and say, "No!" This is an emotional topic for them, not a rational one.

At a basic level, this episode has illustrated just how widespread suspicion of Muslims really is -- and how easy it is to bring that suspicion out. This is what the right has been exploiting. Park51 supporters can make a powerful rational argument for the project to be constructed, but it is no match for the emotions being stirred by the right. In this gut-level suspicion, there is a kinship between mosque opponents, whether they are hardened Islamophobes or well-meaning people who like to think of themselves as tolerant.

To be fair, I'm not sure this will give Republicans much of a boost in November; as Klein noted, the economy is far and away the top factor this fall. But I can't see how it will hurt them at all -- now or down the road.

Let's say that, years from now, Muslims are more assimilated and that expressing suspicion of them has become politically toxic. Will the GOP be hurt by the fact that its leaders played such a big role in fomenting Islamophobia this decade? Not unless they keep up their Muslim-bashing after it stops being a political winner.

The GOP has a model for this. The party of Lincoln reinvented itself in the 1960s as a refuge for conservative Southern Democrats who resented the civil rights movement and Northern white ethnics who felt threatened by the influx of African-Americans into their cities. This strategy, liberals assumed, was a sure loser for the GOP. With Jim Crow dismantled, the era of integration had begun: Why were Republicans betting on the past? Liberals were right to see ugliness in the GOP's courtship of these voters, but they failed to realize how many of them there were -- a lesson they spent the next few decades learning and relearning through one painful defeat after another.

This did cost Republicans African-American voters, once a loyal component of their coalition, for good -- just as today's GOP will lose Muslim voters for good, if they haven't already. But as the rest of the country slowly evolved on race, the GOP made sure its messaging did too, always making sure its national candidates and platform were just respectable enough not to offend swing voters.

We can all hope that Americans' attitudes toward Muslims will evolve -- and quickly. I'd like to think that such an evolution would prompt a belated, wide-scale backlash against the GOP for embracing Islamophobia this decade. I'm just not sure it will.