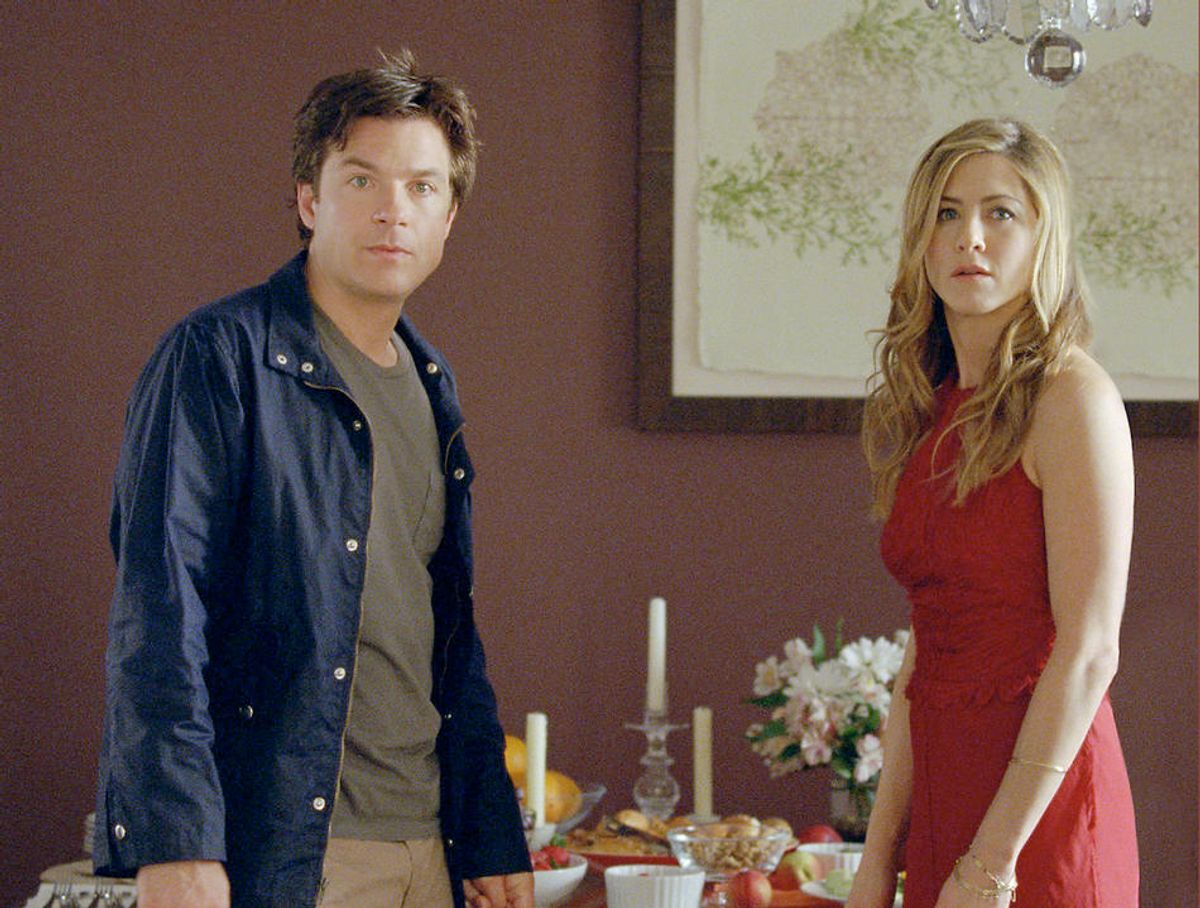 Jennifer Aniston and Bill O'Reilly should definitely send each other Christmas cards this year. By getting into a ritualized kerfuffle over Aniston's new movie, "The Switch," which proposes the daring hypothesis that some women may decide to have children without a man in their lives, these two fading pop celebrities managed to make themselves briefly seem relevant. Unless you're old enough to remember Dan Quayle vs. "Murphy Brown" from 18 years ago, that is, in which case the whole thing seemed like warmed-over cultural warfare from the early Pat Buchanan epoch.

If O'Reilly seems less hot than he used to because he isn't quite crazy enough for today's right-wingers (and who'd have thought we'd ever be saying that?), Jennifer Aniston faces a crueler but more familiar predicament. She's a well-liked female star who's just north of 40 but is not named Julia or Nicole and lacks a celebrity spouse. Her more serious problem is that she lacks a clear métier: Aniston is a gifted comedienne best suited for screwballish character roles, but she seems compelled by career forces -- managers, money, vanity; who knows? -- to play the romantic lead in a series of unremittingly mediocre love stories.

I don't know whether the Aniston-O'Reilly cage match can pump up much consumer appetite for "The Switch," which is not just an orphaned film from an orphaned studio (Miramax, which Disney is unloading to a private investment group) that's being dumped in the doldrums of late August, but also the second movie of the year to star a formerly huge actress named Jennifer as a turkey-baster mom. But here comes the surprise: It's peculiar, and pretty good! OK, compared to "The Back-up Plan" (Jennifer Lopez's unhappy comeback vehicle), "The Switch" is the collected works of Preston Sturges and Ernst Lubitsch, but that's not a fair standard of comparison. Taken on its own terms, it's a light, sweet, curiously enjoyable misfit romance, whose real star is not Aniston but her magnificently awkward Lothario, Jason Bateman.

I rather suspect that Bateman's intensely neurotic, sweater-vest-wearing finance professional, Wally, is the cause of the film's marketing difficulties -- but he's also what makes "The Switch" more interesting than your average rom-com. This kind of movie is normally expected to focus on the female character's traumas and travails, but Aniston's Kassie is more like the sidekick or enabler for Wally's long and angst-ridden voyage of self-discovery, which begins with him exiling himself to the role of her gay best friend.

No, wait. I don't mean that Wally is really supposed to be gay or bi or closeted -- that never comes up even as a possibility. But this movie's weird gender politics are never quite resolved, and Wally sure behaves a lot like a gay best friend, or at least a gay best friend in a movie made 30 years ago. When Wally tells his other best friend and boss, Leonard (Jeff Goldblum, hilarious in every scene), that Kassie has rejected his offer to be her sperm donor, Leonard snorts, "What does she take you for, a eunuch?" As well she might. It seems as if something unexplained happened between Kassie and Wally years ago, and ever since he's buried his true emotions under layers of bitterness, alcoholism and hypochondria. His efforts to date other women are total disasters. He's deeply in the closet, you could say, about the fact that Kassie is the love of his life, and he lacks the courage and confidence and self-knowledge to man up and tell her so.

As you can see, Wally isn't exactly the rugged manly-man demanded by conventional romantic comedy, nor is he the lovable doofus from the more boy-friendly Judd Apatow version. Instead, he's a decent, nice-looking fellow whose self-loathing and emotional paralysis are externalized in his gruesome wardrobe choices. Bateman, a longtime TV actor best known for his lengthy run on "Arrested Development," captures this guy with startling and delicate precision, but Wally is not a character likely to fill women's hearts with desire and men's with admiration. Indeed, it's never exactly clear what bland, pleasant TV producer Kassie gets out of their friendship, especially since Wally turns out to be the kind of guy who would swap his own spoodge for that of her handsome rock-climber sperm donor (Patrick Wilson), partway through a hitting-bottom alcoholic blackout.

Given the title of the movie, I don't think that qualifies as a spoiler. Anyway, most of "The Switch" takes place years after that event, when Kassie returns to New York with a precocious and maddeningly compulsive 6-year-old named Sebastian (the delightful Thomas Robinson) who is self-evidently Wally's son, although nobody involved wants to face that fact. "The Switch," which is directed by "Blades of Glory" duo Josh Gordon and Will Speck, and adapted by Allan Loeb from a Jeffrey Eugenides short story, mostly isn't the zany farce its premise suggests. It's funny in bits and pieces, and around the edges, and the chemistry between its stars is sweet but very slow getting out of the bottle, like maple syrup from the freezer.

Gordon and Speck pour a little too much of that icy syrup over this movie's resolution, as if trying to cover up the acrid, strange, eunuch-y aftertaste that Bateman lends to the whole affair. All love stories have to have a scene now where the main character is all alone and introspective while some emo-indie-guitar-type person drones dolefully on the soundtrack, and I really hate those scenes. Who doesn't hate those scenes? If you like those scenes I don't want to be your friend. But "The Switch" comes back strong, with not one but two of the better marriage-proposal scenes in rom-com history. Can this odd but likable little movie turn Jennifer Aniston's career around? Not that likely, but at least it isn't doing Bill O'Reilly any favors either.