This week in crazy: Dorothy Davidson

A mayoral candidate in Alabama won the coveted (and imaginary) Nick Saban endorsement, with help from Photoshop 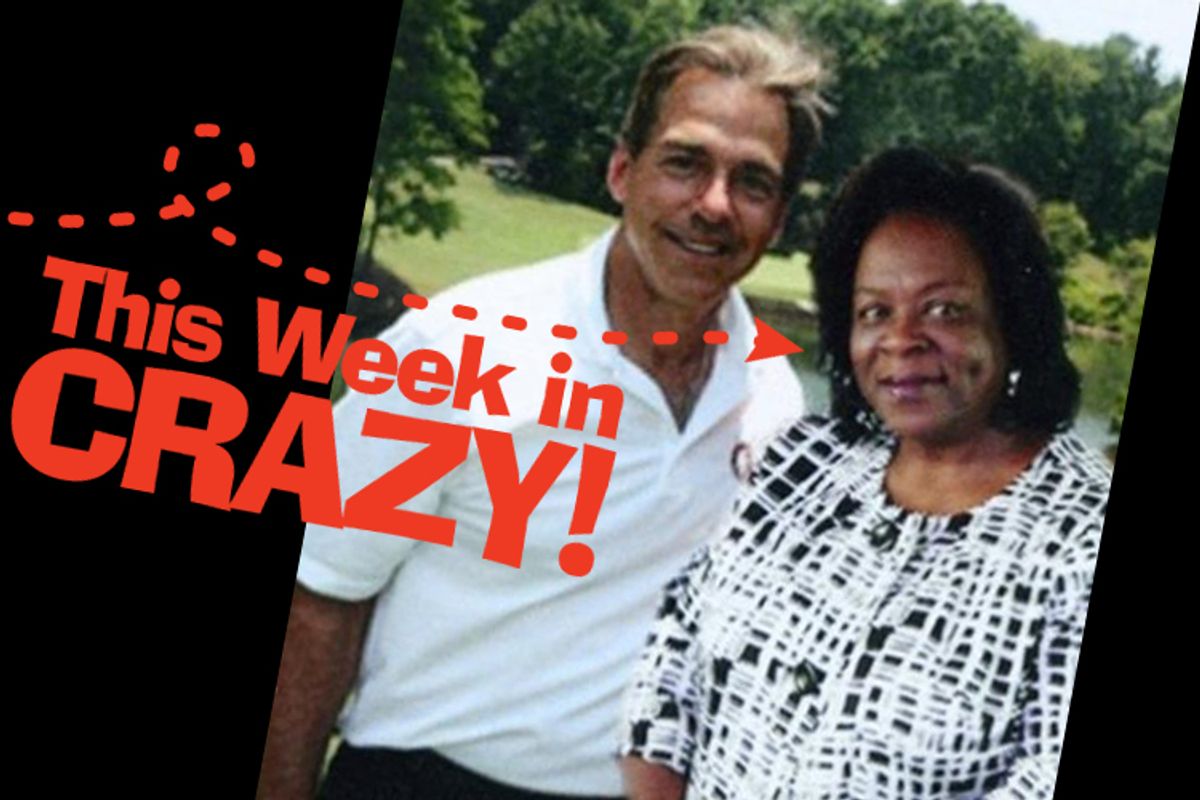 If you're running to be the mayor of a 28,000-person suburb of Birmingham, Ala., you could do worse than win the support of the most popular man in Alabama. So when Bessemer Councilwoman Dorothy "Dot" Davidson heard that she received an endorsement from University of Alabama football coach Nick Saban, "everybody at the campaign headquarters started jumping up and down and celebrating," she told the New York Times. The only problem: The endorsement was made up.

A few weeks ago, Davidson's campaign began distributing fliers showing Davidson posing on a golf course with Saban, who last year led the Crimson Tide to their first national championship since 1999. The fliers read, "Nick Saban fully supports Dorothy 'Dot' Davidson and thinks she would be an excellent Mayor for the City of Bessemer." (The other side of the fliers featured college football schedules for the upcoming season.) But the photo was altered -- and not particularly well. Davidson simply inserted herself into a 2007 photo of Saban and his wife.

On Wednesday, the Birmingham News learned that Saban had not endorsed anybody, nor had he even been contacted about an endorsement. Davidson disputed that. The paper showed her the original photo. Her response was somewhat poignant:

Davidson, when contacted about the campaign ad and photo on Tuesday afternoon, at first said the image of her and Saban together was real and taken about three weeks ago. However, when presented later with a 2007 photo of Saban and his wife that appears to be the base photo onto which Davidson's image was added, the candidate acknowledged that her image was digitally added to the 2007 photo.

"They said we could do it this way," Davidson said.

But Davidson still maintained that the endorsement was real. Until it became apparent that Saban was simply not going to acquiesce and admit to endorsing her candidacy.

Davidson's campaign manager, Kevin Morris, took the fall. He claimed he tricked the candidate into believing she'd received the endorsement, and he took responsibility for the terrible Photoshop as well. Morris said his dad is totally friends with Saban, and he claimed that he asked Saban, while they were out on the links one day, about supporting Davidson, and Saban was totally receptive. Morris also claims Davidson only believed him because of his dad's supposed friendship with Saban.

But even if all that's true, the candidate did believe that one of Alabama's most famous celebrities had decided to jump into politics by endorsing one of six candidates for mayor of a random suburb. And she posed for a portrait that was to be (ineptly) digitally inserted into an unrelated picture of Saban, for use on a flier. And she happily distributed said fliers featuring said awful photo-illustration. And Davidson even maintained that the photo was real, until she was confronted with the original. All of which makes Dorothy "Dot" Davidson sound a bit -- sorry -- dotty.

2010 Elections Football This Week In Crazy