Did the candidate for governor just tell Californians that Wall Street wants her to win the election? 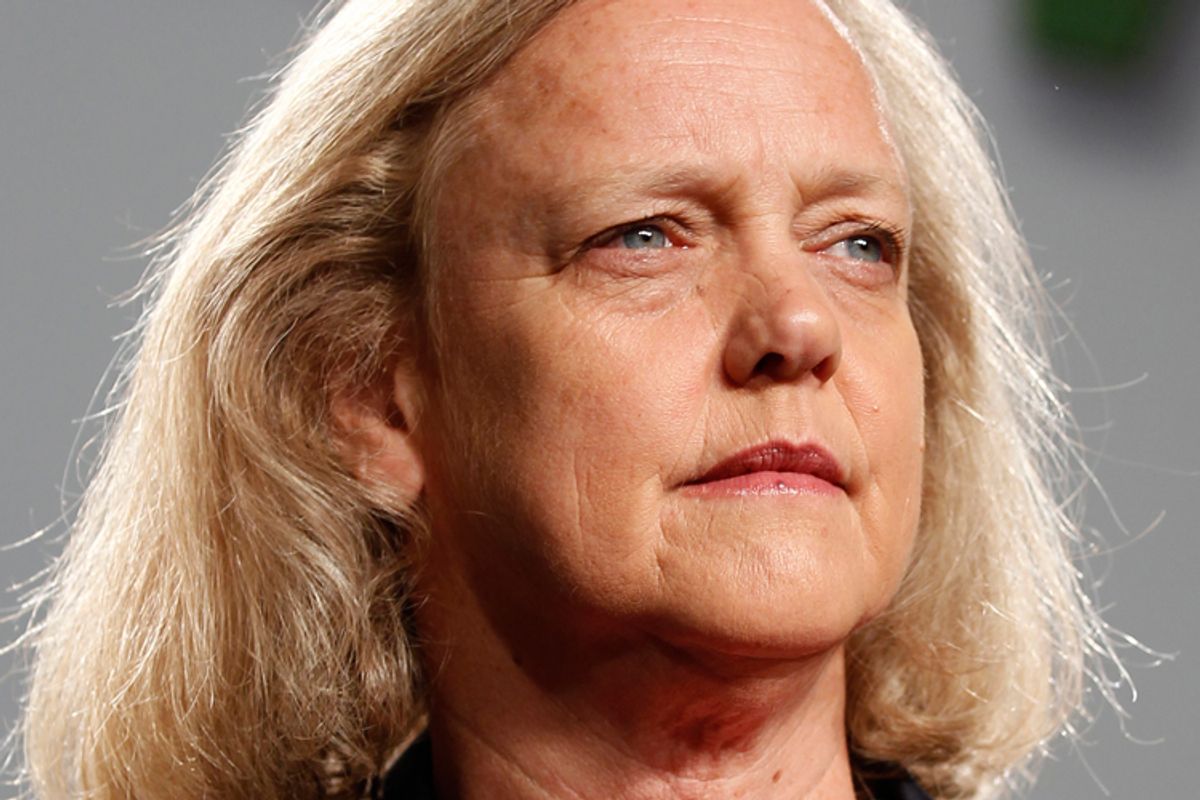 "Do you know who's as excited about this election as we are? The people of New York. They have suffered the financial reforms that are going to crimp our ability to raise capital and they want California to turn the corner."

The people of New York? I haven't seen any good polling numbers about how Meg Whitman is regarded by the people of New York, although presumably she still has some fans among the horse-riding set in Cold Spring Harbor, Long Island, where she grew up. And while it's true that a return to strong economic growth in California would be good for the whole country, Whitman's emphasis on those "who have suffered the financial reforms" seems to refer to a specific group of New Yorkers -- the executives of financial institutions with headquarters in Manhattan.

Calbuzz labels Whitman's baffling Back East shout-out a "secret message to Goldman Sachs." But what could she possibly be thinking? Whitman is the poster girl for sleazy dot-com-boom-era you-scratch-my-back I'll-scratch-yours corruption.

From 1998 to 2002, while she was CEO of eBay, Whitman helped steer millions of dollars of her company's investment banking business to Goldman, court records show.

In 2001, Goldman put Whitman on its corporate board, paying her an estimated $475,000 for little more than a year of part-time service. The company also gave her insider access to the initial public offerings of hot stocks worth millions, according to the records.

Whitman left the board in 2002 after she was targeted in a congressional probe of bond underwriters and "spinning" -- a financial maneuver, now banned, in which Goldman and other firms allegedly traded access to hot IPOs for bond business. Whitman later settled a shareholder lawsuit related to profits she and other execs made from buying the IPOs.

Whitman owes some of her $1.4 billion in persona net worth to the profits she made by getting in on the ground floor of those hot IPOs, so maybe she was just saying thank you to Goldman for helping bankroll her campaign, and likely helping her set the all-time record for personal spending by a candidate for office in the United States. But I don't think she's helping her case by reminding either the people of New York or California of that sorry episode.

In other Whitman trivia, Crooks and Liars relays the news that despite unloading $104 million dollars so far on television ads, Whitman is still in a dead heat with Jerry Brown, who hasn't even started spending yet. Meanwhile hardcore conservative Republicans are distraught that ever since the primary, Whitman has staked out a moderate position on illegal immigration and refused to support the Prop 23 initiative aiming to suspend California's landmark global warming law, AB 32. Imagine that -- a Republican candidate for governor who realizes that angering both the Hispanic electorate and environmentalists is a sure-fire recipe for failure in California.