"True Blood" recap: Trust no one 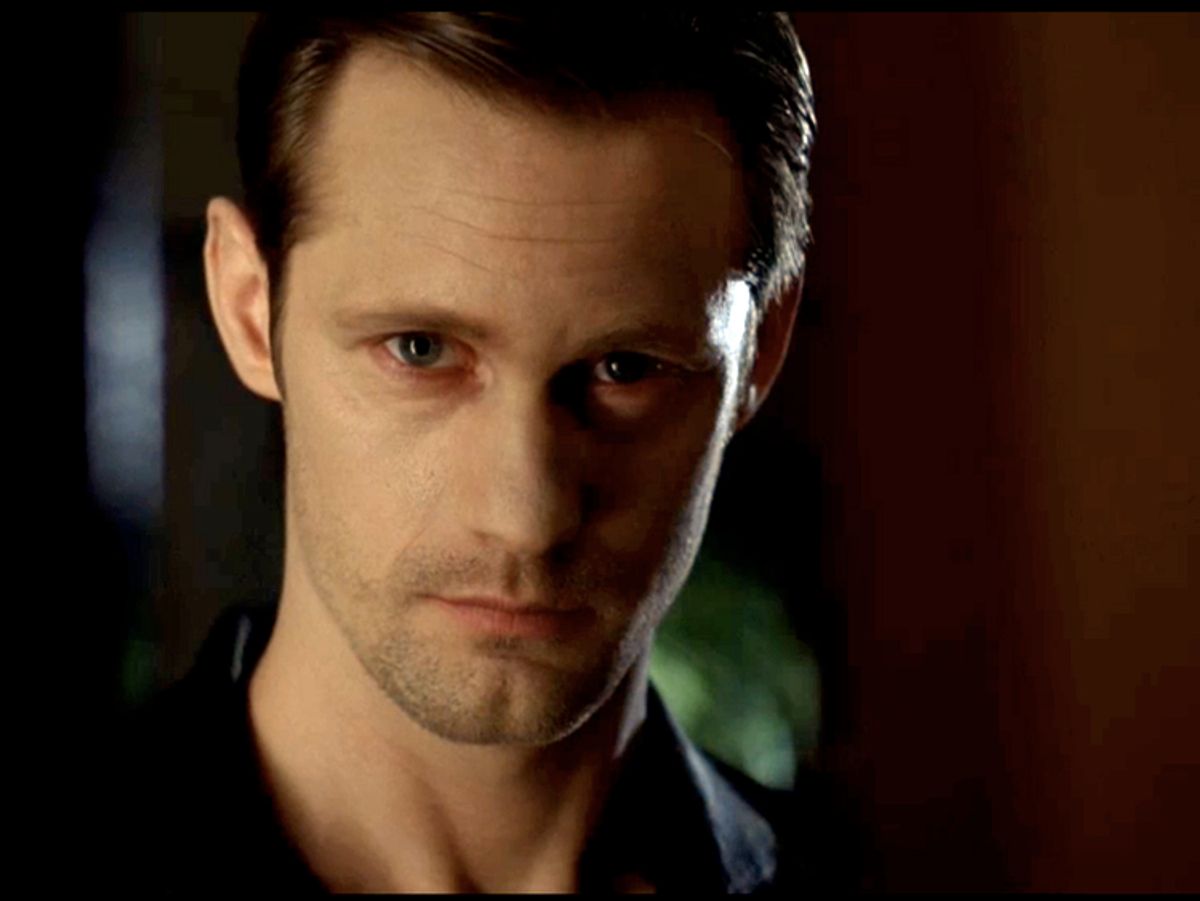 Sorry, what's that Sookie? Oh right, you have a secret that we've been waiting to find out for three seasons. Cool. But do you mind if we cut back to Nan and Russell first? Because I still have so many questions from last episode.

Like why exactly do vampires need constitutional rights? So that they don't get discriminated against at work? Unless America's planning to re-organize its government to be more like Major League Baseball and start doing most of its business at night, vampires can't really hold office can they? And are they hoping to get legally married? Or have access to an eternity of social security? Which I guess would make sense if they're expected to pay an eternity of taxes. But at what point would they get to retire? And would they be eligible for Medicare? Or would we just set up some kind of blood exchange program so we can move on from this universal healthcare quagmire once and for all?

Bill explains the whole not very interesting or plausible fairy situation to Sookie. (Fairies a.k.a. "The old people." Really? Yawn.)  Fairies have blood that is irresistible to vampires, but vampires have long believed that fairies were wiped out of existence. A belief, I imagine, fairies would want to maintain. Except for the day they decided to come out of hiding and rape Sookie's ancestors.

"So my people [the fairies] were rapists?"  This is Sookie's best line since "So they [the werewolves] aren't really Nazis?"  But I still think ancient were-masons was a much juicier revelation than Sookie, the half-FILF.

Maybe I'm still in shock from watching Russell de-bone that news anchor, but there's so much I don't understand in this episode.

Like why was it one week Jesus was all "I'm going to have to break up with you Lafayette because you're a drug dealer!" And this week, after Lafayette uses V to save Crystal's ungrateful father, Jesus is totally "Vampire blood. Let's do it!" There has to be a better reason for this kind of character flip-flop than just the chance for us to visit his Santeria relatives and experience the kind of exciting visual effects not seen on television since Rod Serling's Night Gallery.

And is Holly really Wiccan or just wannabe Wiccan? And Sam used to be a jewel thief before he became a double murderer? The same Sam who has a rule against dancing at Merlottes? And why is Bill looking so weasely all of a sudden when Eric challenges him to tell Sookie the truth. Didn't he just tell Sookie the truth?

It's like you can't trust anyone on this episode called "I Smell A Rat."

Every revealed secret just unravels a whole new murky layer of story. Fortunately there are other pleasures to "True Blood" than coherent plot lines. Like our new catch phrase. "Blah. Blah. Vampire emergency." (Thanks Pam! "Ring, ring, hooker" was getting a little stale.)

And it's the little moments that count. Like Nan spinning the political damage created by Russell. See, he's "just an individual." Like Jeffrey Dahmer. Oh, snap! Nan, you're good! Poor Russell. You'd think he'd rate at least a comparison to Bundy or Manson. But I guess this is why Nan's back on television and Russell is now a broken man trawling Portland for street hookers.

And by the way, you're right, Eric really is a whiny bitch. I can't believe Sookie fell for the "I won't be around for much longer" line. It sure didn't take much to get her to leave the safety of Jason's vampires-not-welcome house to hunt Eric down at Fangtasia.

Eric tells Sookie that to die the true death without having kissed her would be the biggest regret of his millennium-long life. Then Sookie kisses Eric back, even though she's just spent two episodes making Bill tell her over and over again how real his love is. Oh, Bill! At least it's not like she tried to twist Eric's head off or anything. And once Eric's deepest longing has been fulfilled, he throws Sookie over his shoulder and chains her up in the basement of Fangtasia with a metal dog collar, ostensibly so he can use her to appease Russell. So I think Bill still has a really good shot.

One reason vampires may have thought fairies were extinct is that fairies don't seem to be the brightest bulbs on the block. Sookie's advice to Jason to tell Tara that he killed Eggs goes to show that just because you can read minds doesn't mean you understand how they work. This is exactly the last thing Tara needs to hear right now. Obviously Tara serves no purpose on this show than to be constantly betrayed by anyone she's ever loved. Can't we just give her one week off?

Meanwhile the show is filled with people who are way more interesting things than fairies! Crystal is a black panther! An actual one, not a radical civil rights activist. Finally I find out why vampires need constitutional protection. So that blood thirsty revenge won't be their only recourse when someone plants a burning cross on their lawn. I sure hope that was done by regular racist white trash, and not the ones who are secretly black panthers. Even if they're literal black panthers, the political mirror that the show is trying to hold up here is getting about as readable as a disco ball.

And, finally: Why do I  feel so sad for Russell as he lies in the arms of Tony, the hooker he just murdered? I guess it's because I miss Talbot too. I can only imagine what he might say to Russell if he were still alive."