How a topless beach helped my self-esteem

Getting breast reduction surgery left me feeling unsexy. Then I spent a summer getting ogled on the French Riviera 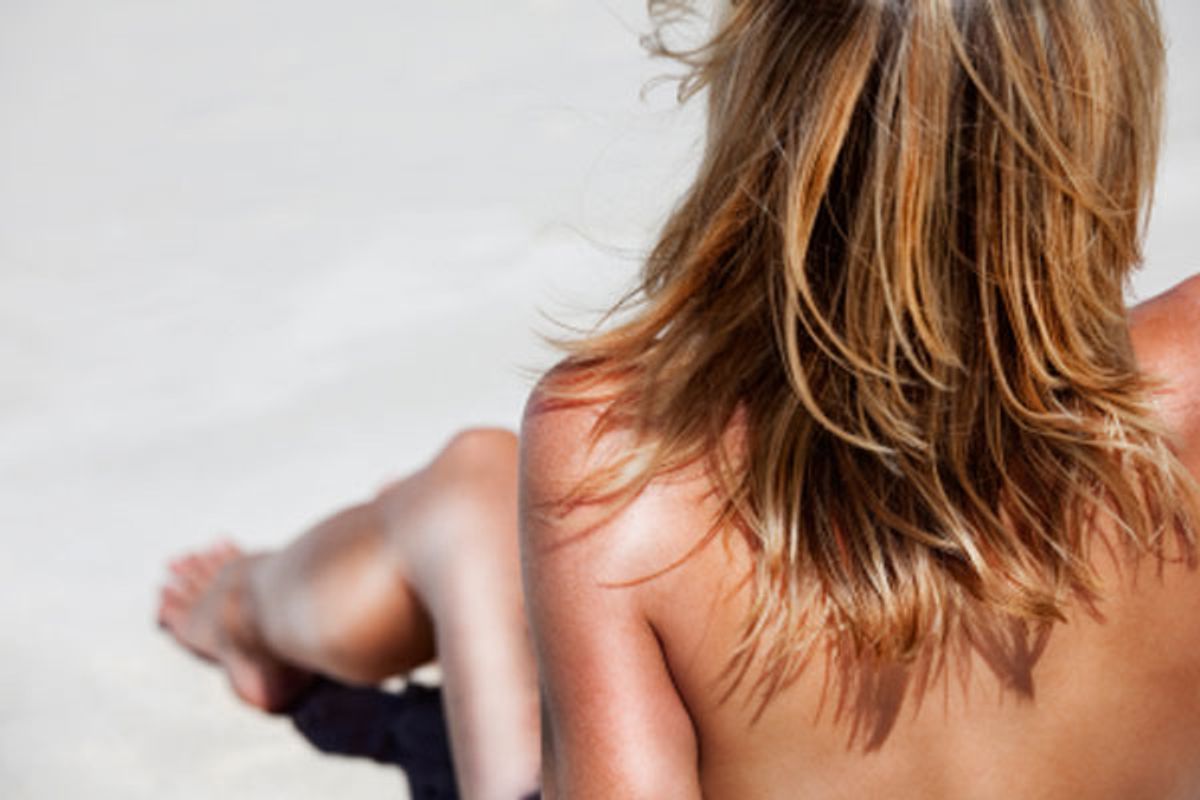 A few years ago I had a breast reduction, and although the benefits of this surgery were innumerable (e-mail for details, ladies), I found myself going through a strange period of adjustment. For many years, my breasts had been the focus of men's attention; I could go out to bars with spinach in my teeth and still come away with a pocketful of phone numbers. Once my breasts were smaller, I hoped men would pay more attention to the full package: legs, abs, personality. But sometimes, I'd look down at my new, perfectly proportioned, size-B breasts and think: Did I make a mistake?

But these moments of neurosis were, thank God, short-lived. As it turned out, fate led me to the south of France and there, despite being surrounded by tan goddesses, I got back my flailing confidence.

No matter what the French say about their topless beaches -- C'est naturale! You Americans are just prudes who cannot accept zee human body! -- they are, essentially, one big gawk-fest. For les hommes. In the North, you might see entire families bathing naked: Maman with her overtaxed breasts sagging unabashedly on her stomach; Papa with his grey-pubed zizi shriveled in the cold. But the real spectacle, where only the babes go topless and the topless are all babes, is on the Riviera.

It seemed like the perfect spot to take my new rack for a test drive. I knew no one, nobody knew me and nobody, presumably, cared. Bare breasts were everywhere, after all. There were breasts on billboards and breasts on bank notes and breasts on prime-time TV. I once saw an Italian game show where the object of the game was for a blindfolded man to "recognize" his wife by feeling up a row of naked contestants. This intrigued but also confused me. Were breasts revered here or weren't they? If they weren't revered -- if they were, as the French kept insisting, "no big deal" -- then why were they used so fetishistically in advertising? And if nudity was so naturale, why wasn't there one penis appearing in the media for every pair of breasts? Or one for every 10? Or at least some male buns once in a while? I tried to address some of these questions at dinner parties but was always dismissed as a prude. Or worse, une feministe.

Soon I knew if I wanted to keep the invitations coming I'd have to keep my mouth shut. And that if I wanted any answers I'd just have to find out for myself.

So I set off for the beach. I purchased a new thong for the occasion (which was so cheap I thought it must be government subsidized) and brought along the other essentials: tanning oils, reading materials, my "Tommy" towel (as in the Who, not Hilfiger), some tortoise-shell Ray Bans and my gay friend David. David, like me, was new to the country and eager to figure out this odd Homo sapien, l'homme Francais. I also knew I could trust him to make acute observations of the topless scene without being clouded by lust.

The beach we chose on our first outing was the Gravette in old-town Antibes, where the sunbathers were mostly women. They lay on towels and chaise lounges with small inflatable pillows for their heads. They each had about six tubes of tanning products -- one for each body region, we assumed -- and they were all, without exception, topless.

"Oh boy, breasts," David said flatly, and spread out his towel. He had worn a thong Speedo to our first outing, which, he proudly pointed out, gave a favorable lift to his hefty goods. "You owe me two hours at the leather bar for every one I spend with you here."

I arranged myself next to him and made sure I was safely on my stomach before I took off my top. "Oh come on, luv," David said. "What's the point of going starkers if we can't see your nips?"

"Give me time," I said. "I need to ease myself into this." I dug a little trench beneath my towel for my breasts, then I slid on my Ray Bans and began to spy.

There were some men around, but they seemed to hover on the periphery, playing loud rounds of volleyball or smoking at the tables up by the ice-cream truck, adjusting their scrotums in their trunks. Occasionally one of them would have to chase a stray Frisbee through the sea of female bodies saying pardon, Madame, ooh pardon, Mademoiselle, and the other men, when he returned, would crowd around him, as if to find out what wonders he had seen. But all of them -- the French and foreign males alike -- had the same look on their faces. It was one of awe and delight. It was kid in the candy store. It was, There are like 80 naked babes here, and I didn't have to pay to get in. What a country!

Meanwhile, the women seemed to have a placidity about them that said, "Nothing comes between me and my sun." If they moved at all, it was to turn from one side to the other, or to adjust the strap of a bathing suit bottom, or to take it off altogether. They did not once turn their eyes in the men's direction. The grunts of the volleyball players got louder, and their stunts more show-off, but they might as well have been sea gulls -- the women just didn't care. Sometimes I'd see a girl who looked self-conscious, who replaced her top each time she went for a swim and, back at the towel, scanned the crowd nervously before slipping it off again, but David would say, with a sniff, "English. Just look at her skin. Pale as potatoes."

One afternoon a lovely girl to the right of us rose, à la Venus, from her towel. She was tall and willowy and fair and looked to be about 16. Her body had a budding quality to it, untouched and ripe, with the most perfect pair of breasts I had ever seen: high and round with pink nipples that looked soft and tender and just-kissed. As she made her way toward the ice-cream truck I rose up to my elbows to see how the crowd would react. I was expecting traffic jams, lost volleyballs, cigarettes lit on the wrong end. And sure, there were glances -- everyone looked, but no one stared. Or I should say, no one drooled. And that surprised me. "True beauty comes once every hundred years," Fitzgerald wrote. And here she was. Topless.

That night, and for many nights thereafter, I looked in the mirror and realized I was jealous of Miss True Beauty. And it wasn't because of her surface perfection (OK, maybe a little), it was more that she was so comfortable with her body, her nudity. She was fluid and graceful, unself-conscious and 16! Yet here I was in my 20s, still not completely comfortable doing it with the lights on. Sure, I had made great strides since my giant-T-shirt phase, but still. She was born this way. And she spoke French. I wanted to be her.

From that point on, each time David and I visited the Gravette I tried to be a little bit more brave. At first I would lie on my back with my breasts exposed to the sky, but I found I was self-conscious about the way they were flattened by gravity. "How do I look?" I'd ask David. "Can you see my scars?"

It was wonderful to have a male friend who could study my breasts without wanting to lick them. "You look babe-licious," he said. "When you get a tan you won't even notice the scars."

Soon I was able to sit up without a top on and feel proud about it. I had a better view of the other bathers this way. At first I was grateful that none of them were looking at me, but after a few days of sitting up with my stomach sucked in and my legs tucked to the side like Jayne Mansfield in the haystack, I got annoyed. I pulled the earphones out of David's ear and complained, "No one's looking at me."

"That's because you're looking at them," David said. "When your eyes are closed, all eyes are on you."

"Really. Look to the left."

I saw a man with binoculars suddenly train them on a sea gull.

"Now quickly, look to the right."

As I did this, I caught a few men averting their eyes. One of them pretended interest in the old fort. Another wiped some imaginary sand off his arm. I stuck my chest out a little more and tossed my hair.

The next step was to apply scented coconut oil to my body while in the seated position, or even better, while standing. "This is what my boyfriends always asked me to do," I said as I rubbed the oil into my breasts. "I'd do it and they'd beat off." I oiled up the undersides and the nipples, realizing that in public it was kind of laughable, but kind of enjoyable as well. I was doing what most people would agree was an incredibly sexual thing, yet, in the context of France and its beaches, we had to call it naturale. I giggled. "I can't believe no one has a hard-on!"

"Turn around," David said. "Up there." Behind us, up on the wall that separated the beach from the yachts, was a young man with a video camera, his zoom lens zoomed in on me. He had a baseball cap with Greek letters on it and what appeared to be a bulge in his trunks.

"Frat boy," I said, and flipped over onto my stomach. David smiled at the cameraman and waved, then turned around and displayed his waxed buns.

Two more months went by, and I had developed the most incredible tan of my life. My skin was an uninterrupted terrain of bronze, except for one perfect triangle of white flesh in the pubic region that I checked daily as a kind of tan-o-meter. I was also fit and expat slender (read: poor), and my hair was bleached to a strawberry blond. I was as close to Miss True Beauty as I'll ever be.

Pity that I was sleeping with no one, and no one was sleeping with me. In the States that would have been a problem, or at least a frustration, but here the fact that I was sharing my body with the masses, day in and day out, almost took the place of sex. After all, so many of my sexual fantasies involve some kind of public nakedness, being seen and desired; considering that, the simple routine of oiling myself lasciviously in front of a sea of strangers and strutting around in a thong became a sort of substitute for the act itself.

So I became an exhibitionist. Soon I was the woman strutting topless to the ice-cream stand. I was the woman bouncing around in the waves. It was the perfect look-but-don't-touch scenario, and I loved it. By the end of the summer I no longer had any insecurities or doubts about how I looked to the opposite sex. So I sent a postcard to the cosmetic surgeon who had done the reduction. On the front was a tan, topless woman running out of the water with a jubilant smile on her face.

Lee Harringtons book Rex and the City, was published by Random House in April 2006. She lives in New York City with her second dog, Chlotilde.