Miss Universe and the death of the beauty pageant

Even as a gay man, I couldn't find joy or fun in last night's monument to wax figurines and Donald Trump 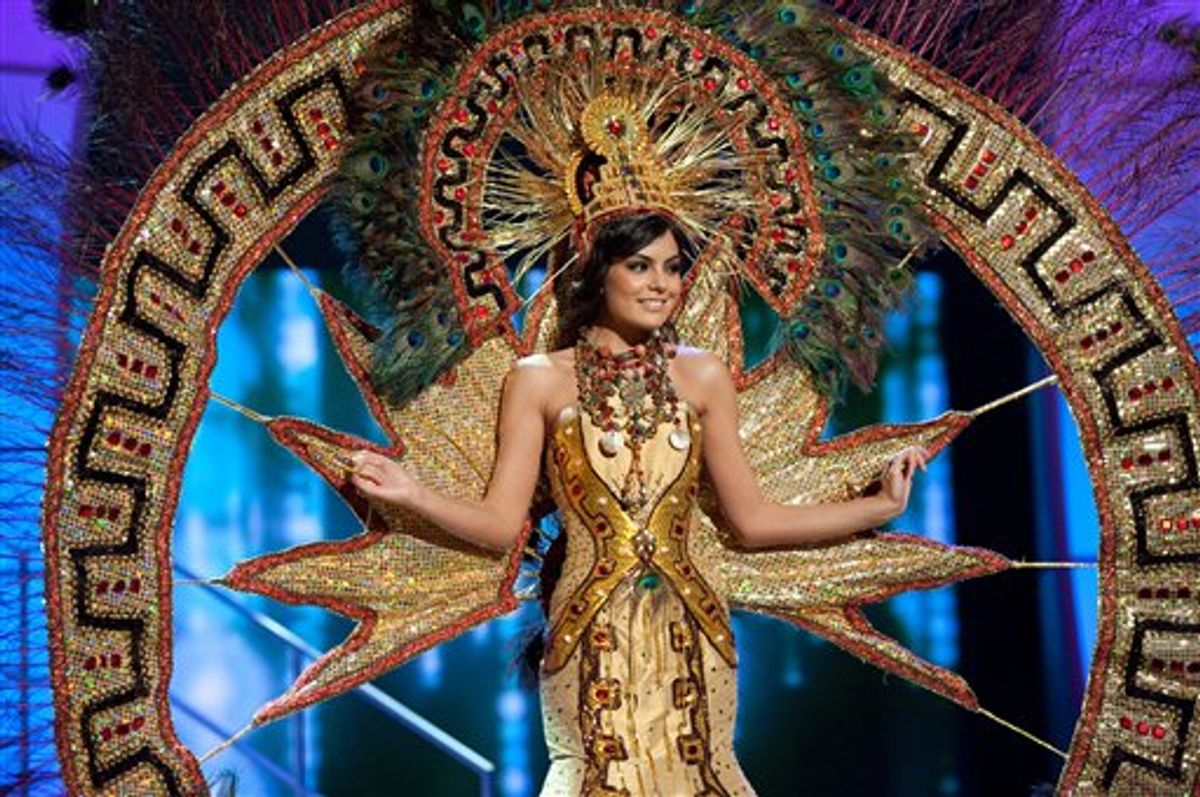 Last night, I watched a two-hour commercial, and a beauty pageant kept breaking out.

Which is to say that, somehow, amid the interstices of skin- and hair-care commercials and NBC fall-show previews (repeated as insistently as Buddhist chants) and distance-learning courses in hair styling (from chief sponsor Farouk Systems) and running spigots of advertorials for Las Vegas attractions (Sushisamba! Minus 5!), the high solemnities of the 2010 Miss Universe competition were prosecuted efficiently and relentlessly and, yes, joylessly.

Do you remember when beauty pageants were entertainment? A hoot and a holler and a half? Gay men crowded around the TV set with their boy and girl pals and laughed at all those fire jugglers and hula dancers and rhythmic gymnasts and all the glib horrors that came tumbling from their cherry-red mouths, and look, there WAS Bert Parks dragging his ponderous ass down the Atlantic City runway, and we could laugh because it was our game, too. We were in on it, living in the same gap between aspiration and reality.

And then something happened. Miss America became a serious thing and began to boast about the scholarships it funds and the lives it improves, and today, it's rotting on unremunerative perches like TLC (though it will be broadcasting its 2011 edition on ABC). In marked contrast, the Miss USA-Miss Universe franchise has refused all along to fret about whether its contestants could carry a tune or spell their names or build latrines in Burkina Faso. It has remained a principality of the flesh, where the currency is two-piece bikinis.

And to judge from last night's iteration, that carnal philosophy has reaped its reward. Miss Universe is in the pink: stinking with ad revenue, sprawling across a two-hour expanse of network television. The whole enterprise should be neon with triumph, and yet it's every bit as gray as an annual report. For that's exactly what it is. A celebration of a company and the man behind it. The man whose International Hotel is shown at regular intervals thrusting toward the Vegas sky. The man known simply to the outgoing Miss Universe as "Meester Trump."

Oh, yes, the Donald is weighing in at every commercial break, reminding us that this is his franchise and promising new ministries of Eros. "The most incredible women in the world," he announces, "will show off the sexiest swimsuits you can imagine…. These women would scorch the Sunset Strip." And, just to make sure we're awake: "This is live TV, and anything can happen."

A lie almost touching in its transparency. Nothing very large can happen on that stage that hasn't already been dreamed up behind Trump's Morpheus mask. Oh, sure, a batch of Elvis impersonator/gymnasts can burst in on the swimsuit competition, and the somnolent piano man John Legend can find himself abruptly surrounded by women in evening gowns, but the evening's only real wild card is co-host Bret Michaels, whose customary doo rag and earrings have been tastefully accessorized with a shiny-lapeled tux and open-collared shirt.

If, in your hunger for entertainment, you entertain fantasies of him being strangled by Miss Zambia's coconut bra or, at the very least, dragging the contestants through a panty-twisting contest just to prove their love for him … alas, in these skank-free precincts, the wildest thing Michaels can do on this stage is leer at the cue cards and inform Miss Jamaica that "Ja makin' me crazy." (And yet … and YET … isn't his horndoggery preferable to the preening ethnic pronunciations of co-host Natalie Morales, who, in a just world, would be scalded in habanero juice after saying "MEH-hee-ko" for the fifth time?)

Bret understands, and so do we. This is business. There's no room on the balance sheet for lust. Or camp. Or grunge. Or even beauty. Miss Universe subsists on a steady diet of press releases, on promises of an "incredible journey" that will be undertaken by "molten hot" women.

In fact, these women do what beauty queens have always done: present themselves like waxed fruit. And indeed, if you spend enough time with them, you find yourself eyeing them for bruises and gray patches. The two young sex-starved heterosexual males who watch Miss Universe with me begin the night in a general mood of welcome and graduate steadily into Ruskinesque discrimination. Miss Ukraine is flagged for her protruding "babyback ribs." Miss Australia, who looks as though she's just been carried off in triumph from a field-hockey game, is dismissed as "a very poor version of Jennifer Aniston." Miss Thailand has her gender questioned. Even I am forced to admit that the wildly sensual Miss Ireland has a disproportionately plump lower lip.

Oh, yes, we become jaded -- all the sunless tans, all the lettuce-devouring teeth -- but we beat on, don't we? Waiting for those moments of bald fiction. ("I'm having so much fun that I keep forgetting this is actually a competition … I like trying different foods ...") Those slips of the mask. (The cold rage of Miss France, captured just moments after her elimination.) And, of course, those passing squiffs of unlicensed humor, which tend for some reason to cluster in the "demanding final question" segment.

"Many airports are using full-body scanners," croons judge and retired medicine woman Jane Seymour. "How do you feel about going through a scanner that can actually see through your clothes?"

Miss Ukraine's reply is obscured in translation, but no language barriers deter Miss Philippines, who, when asked to recall the biggest mistake of her life, declares that she has never made one. Even if this were true, it ceases to be, and she is left a waif-shouldered fifth.

The judges (who include Sheila E, looking worthy and philanthropic, and skater-android Evan Lysacek) are congratulated more than once for their hard work, as if they really were building latrines in Burkina Faso. They can at least be credited with anointing the evening's most unqualified knockout: Jimena Navarrete, or, as she is known to Bret Michaels, "the hotness that is Mexico."

And with the pinning of the tiara, the show comes in under two hours, and Trump Organization can close its books and pass out its bonuses and write off its after party. A job well done.

But what's this? Natalie Morales, seeking to recover her journalistic bona fides, rushes toward the new Miss Universe, shouting: "What is going through your mind right now?"

Forgetting, in that moment of panic, that Miss Universe speaks no English, that what is going through her mind is of no concern either to her or to the corporate endeavor of which she is part, that the business of beauty is now the business of Trump, Miss Universe makes no reply, but her silence has a bottom-line urgency all its own: Faster, pussycats. Shill, shill.