Is that my son wearing a dress?

I'm a progressive, supportive dad. Why was I so troubled by the sight of my little boy dressed as Snow White? 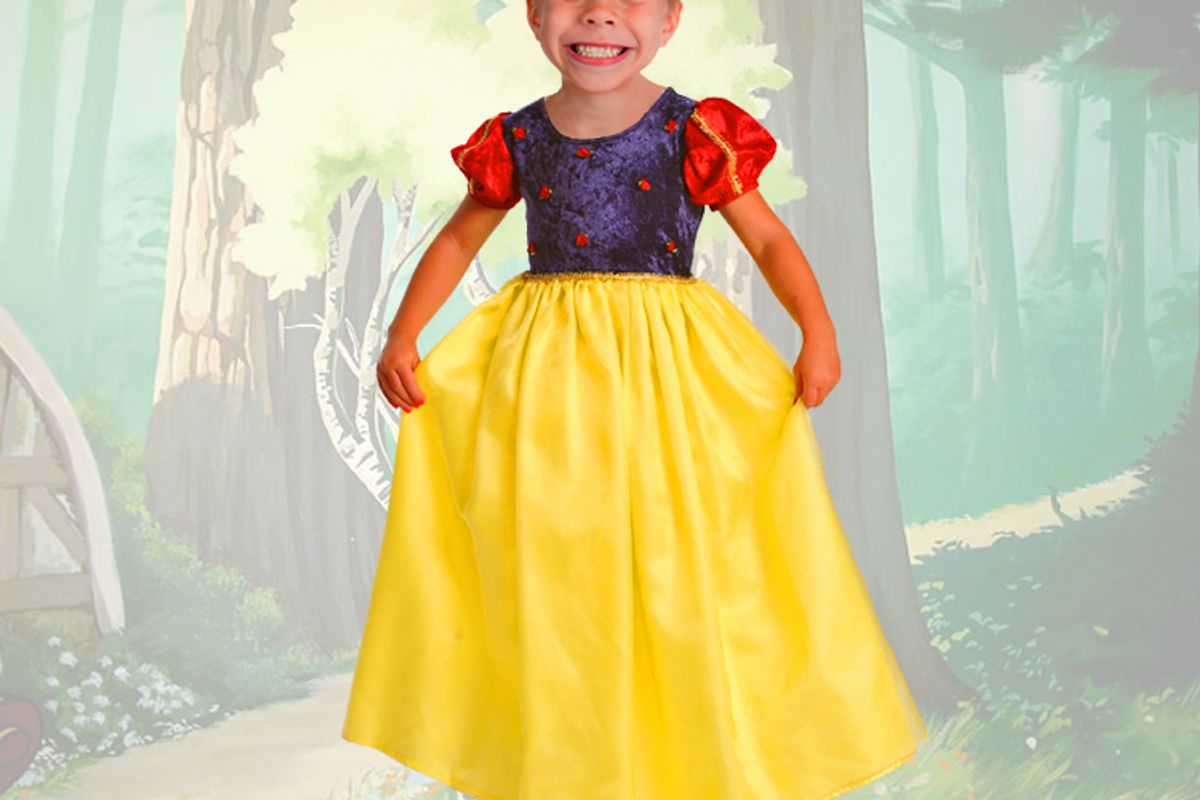 One day early last fall, I returned from a long day at work and discovered my son in a dress. And not just any dress. A Snow White dress.

Luke was 4 years old at the time, so his games of make-believe were varied and whimsical. Sometimes he'd inform me that he was a baby and refuse to answer my questions because "babies don't talk." Other times he'd sprint through our kitchen because a bear had invaded his bedroom. Still, these bouts of role-playing didn't prepare me for the vision of my only son in puffy blue sleeves and a canary yellow hoop skirt.

I can't say it was a complete shock. Luke had been telling my wife and me for more than a week that he wanted to be Snow White for Halloween. Neither of us knew why he latched on to this particular character and not the other 500 personas from his DVD and storybook collection. We assumed this fantasy would recede, eclipsed by the allure of dressing as Elmo or Superman or Richard Nixon. But whenever Melanie or I gently suggested an alternate costume, he would calmly respond, "No, I think I have to be Snow White."

I dropped my bag and made what I hoped was a suitable fuss over the costume. He beamed as I fumbled for just the right adjective. "Beautiful" made me tense. Would he understand "regal"? My face still taut with manufactured glee, I discreetly asked my wife why she had bought the costume. Why had she violated our plan to simply stall until he lost interest in being the tiniest transvestite in town?

It turns out she was the victim of bad luck, much like an innocent young girl who happens to have a jealous stepmother who can transform an apple into a deadly weapon. In Melanie's case, villainous fate arrived in the form of a women's clothing store. Luke, tagging along with his mom on her errands, saw the display of girls' Halloween costumes, sniffed out the Snow White ensemble, rejoiced, and insisted on trying it on. The surprise of finding the costume, the low price tag, the flattering fit: It was the perfect storm. What mother could say no?

As my wife recounted her hapless tale, I glanced back at Luke, who was now stationed in front of the television. He stood a few feet from the screen, fussing with his billowy skirt. The white satin collar rose behind his neck, ending just below his short-cropped, usually boyish haircut. Something -- maybe the frenetic TV cartoon on-screen, maybe a melody in his head from 1937 -- kept him from overhearing his parents' summit. Presently, he twirled around, watching with delight as the skirt clung to him before settling into place. My son was twirling.

It was adorable, of course. It was also troubling.

But why? Did I see the dress as a threat to my legacy, an insult to generations of men who fought wars and presided over propane grills? No, I honestly don't believe that a 4-year-old's Halloween costume has the power to cement his sexual identity for life. I was not threatened by fears of a same-sex, vegan wedding ceremony or a rejection of power tools and the Super Bowl. A far more immediate evil loomed in my magic mirror: children who mock other children.

Still, Melanie and I agreed: If he wanted to wear a Snow White dress to school, we weren't going to stop him. Luke is bound to collide with the Guardians of Conformity throughout his life, and we refused to let that pattern begin with us. But I couldn't stop wrestling with the instinct to protect. Luke was enjoying preschool, and once a child equates school with shame and alienation, it can be difficult, even impossible, to repair the damage. Scratch the surface of a sullen, detached high-schooler and underneath you'll find a grammar school kid who was taunted or ignored or bullied.

Halloween drew closer. Melanie and I told friends and family members about our dilemma, our facial expressions contorting into something between amusement and angst. It became a miniseries I narrated at work, my fellow English teachers appreciating the mounting suspense: Did he still plan to be Snow White? Was he talking about it with the other kids?

Evidently, he was indeed talking about it with the other kids. And so the first cracks in his confidence began to show. About two weeks before the big day, Luke offered me a rare glimpse into his school life.

"I was fighting with Amanda today," he said, half into his pillow.

"She told me that I can't be Snow White."

"Why does she think that?"

"She says only girls can be Snow White."

Apparently, other girls were trying to enforce the same unwritten law. Luke was motivated enough to argue the point with them, but I could tell he was conflicted about the costume for the first time. Oddly enough, he never reported being chastised by the boys at school. Did little Michael, Anthony and Thomas spend naptime dreaming about being Sleeping Beauty?

I forced my face into the least emotional shape I could manage. I asked him: "Do you still want to be Snow White, or have you changed your mind?"

He had not changed his mind.

A few days later, womanly genius intervened. My wife spotted a purple, bulging Barney costume in a store window, and she got an idea. The plan -- which later earned Luke's approval -- was foolproof: At school, he could be Barney, a perfectly sensible choice certain to appease even the crankiest little critic in pigtails. After dismissal, he could change into Snow White at home and then paint the town red, blue, white, yellow and sequined. (What kid could resist the chance of having two Halloween costumes?) And once he got some distance from the kids at school, he would feel less self-conscious.

On Halloween, Luke wore his Barney costume to school. By all accounts, it was a success. He then went home with Melanie, and after his nap the two drove to our relatives' house so Luke could trick-or-treat with his older cousins. I headed over there after work, expecting to find a Snow White with spiky blond hair and chocolate-smeared lips. But when I caught up with them, Luke was in civilian clothes, his listless body slumped in a stroller my wife was steering among the leaves, twigs and tiny Jedi Knights. He looked sapped, the apparent victim of a common cold -- though I suspected a different, more insidious pathogen.

Luke's true identity was on full display, but I wasn't entirely sure who I was. First, I was relieved to see him looking "normal." But then I was disappointed at my relief. After weeks of shrugs and half-jokes, some part of me had begun rooting for my son to parade past the naysayers in a Snow White gown -- rooting for him to prove that he had more courage than the preschool version of myself ever had.

Had I helped the grown-up world destroy some of his capacity for make-believe? Was I vocal enough in coaching him to ignore other people's phobias? I don't know the answers to these questions. But I know something for sure: When the sun was still intense and the sky electric blue, my son's mind shimmered with possibilities. And by the time the season had turned grayish and cold, my son had learned the value of muffling what he truly wanted to be.

Matt Cheplic is a teacher and freelance writer in Northern New Jersey.