I was tricked into eating meat (and I liked it)

I had been a vegetarian for 13 years. But when a new suitor fed me some foie gras, it changed everything 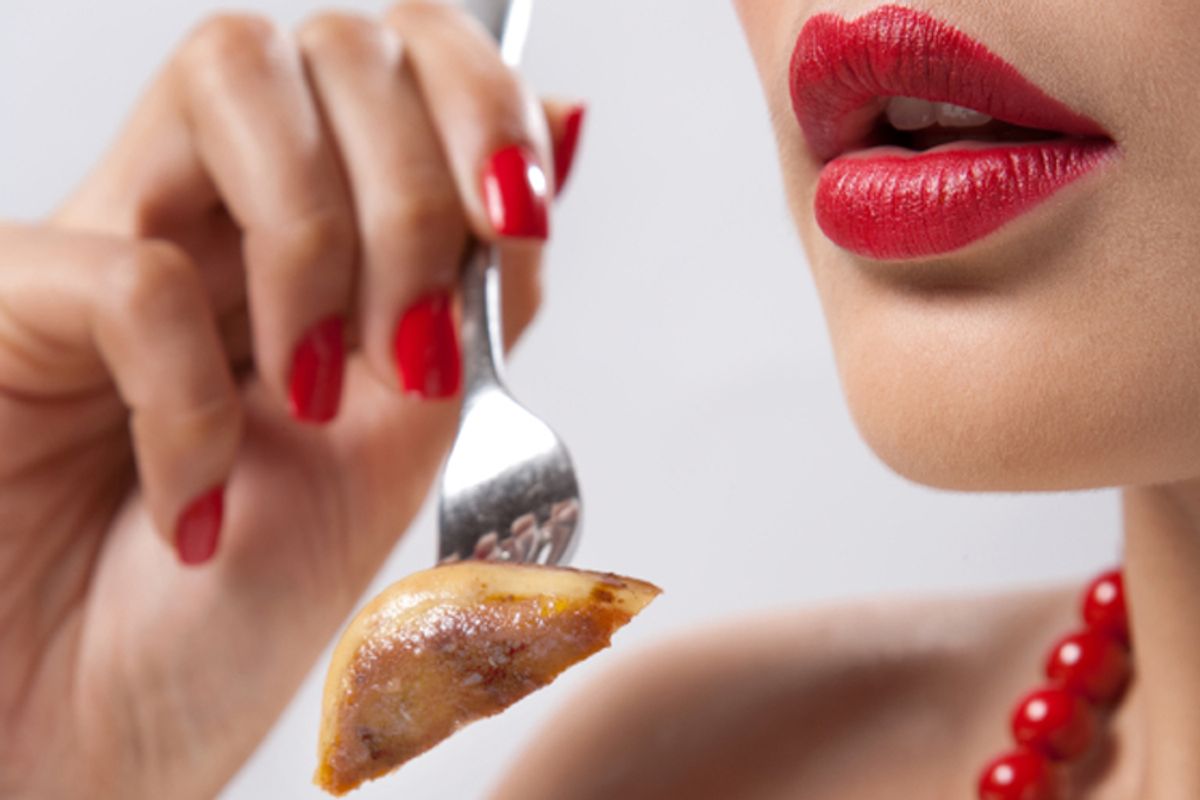 He said, "You should try this," as a plate of mysterious golden morsels landed on the table.

I reached and grabbed the delicate-looking thing and plopped it in my mouth. My taste buds exploded. I hope it's not meat, I kept thinking, though I said nothing. My mouth was busy having an orgasm.

"It's foie gras," he said, and I nodded. I don't know French, but he knew I was vegetarian.

"Goose liver," someone at the glossy black table added, helpfully.

"Sorry," he said, and 13 years of denial crumbled as I shrugged and told myself that I was ready for it anyway. I liked it. I was not uptight. I was having the best sex of my life with this man. I was wearing a new dress.

I became vegetarian after watching a PETA film about pigs going to the slaughter. The soundtrack was "Carmina Burana." I remember sitting cross-legged in our living room in Warsaw, Poland, in tears, arms and brain going numb from what I was seeing on our dinky black-and-white TV. By the time the film was over, I had made the decision that I was never going to eat meat again. Shortly after that I almost died from a form of anemia. My panicked family members reworked my menu, and I started putting on weight. We moved to a small town in Canada where I developed two ambitions: to be liked and to be skinny. I refused to eat with my family.

I achieved both of my ambitions. I became a thin girl who was a sensitive vegetarian. Certain boys flock to that type, and I carried my tortured self around, clad in black and cigarette smell, and if asked, talked about animals' furry faces and innocent eyes. My diet was vodka, salads and defiance. I liked being looked at, but not touched.

I love animals. As a child my chosen future profession was "Queen of Animals." When I was six, I had a hysterical fit when I realized what chicken was made out of. So the predisposition had always been there. But my vegetarianism was not ideological, it was more like a corset: It kept me thin, and the thinness -- in my mind -- kept the boys close by, looking.

In my 20s, I moved to Toronto. I was interviewing a woman who worked with troubled teenage girls for a story for the school paper, when she said something along the lines of, "Some of the girls are vegetarian, but that's just another name for an eating disorder." The woman was overweight, single; I pitied her. At home I was having OK but infrequent sex with a beautiful elfin vegan who thought high heels were ridiculous. We ate lovely vegetarian meals because he was a good cook, but my body was hungry.

I started dating an older man on the side. He was 14 years my senior and a man-about-town type. He showed me filthy fun. He picked out clothes for me and took me to nice restaurants and introduced me to smart and famous people. We did some drugs. He thought my vegetarianism was charming; he promised himself he'd never date a girl who was a smoker or a vegetarian, and I was both. But he was corrupting me quickly, and I wanted to be as corrupted as I could get -- the corset of my vegetarianism was getting tighter and tighter. Meanwhile, I was wearing real corsets in the bedroom, while we had fantastic sex that involved leather, too. High heels. Sometimes he made food for me and called my plates "Grass 'n' Leaves."

Then came the day in September when I ate the foie gras. Later that night, I cried in the bathroom -- I thought it was appropriate to at least shed a few tears over betraying my diet. I mewed something to my older man about having to go to the hospital to make sure I wouldn't die from some kind of toxic shock. But the truth is, I wasn't sad about eating meat, nor was I worried that anything was going to happen. I went home to my vegan and announced my contamination -- and my departure.

I've always loved meat. As a vegetarian I was the first to try out the new veggie ham or veggie bacon, and I know that lots of vegetarians actively pursue meat-like flavors. I still eat mostly vegetarian and grocery shop like one out of habit, but I love a juicy, filthy steak once in a while and I could probably fill a small-sized body of water with the amount of seafood I've consumed since that September years ago.

I know that I used my vegetarianism to cater to my image of what was attractive. I now agree with the woman I interviewed years ago -- it can be a form of an eating disorder. It's what I had used to control my life and my love life. Yes, I know that I let a man control what I ate, that I essentially let him trick me into eating meat again. But damn, I did love that foie gras. Maybe I should have been angry at him, but I can't be mad for being liberated from my unhealthy motivations. It was bound to happen sooner or later. and although I'm no longer that easily impressed 20-something, I love being good to myself and indulge in what the world has to offer. And that includes high heels, good sex and delicious, fatty foie gras.